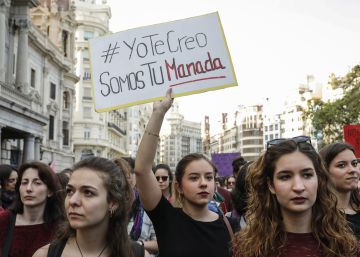 He questioned the story of the victim, if it was normal to smile, to go out with his friends and continue with his life, as evidenced by a detective who followed her. It was debated whether there was a "juerga" in the portal of Paulino Caballero street number 5 – the private vote of judge Ricardo González defined that night as "an atmosphere of revelry and rejoicing"-; it was discussed whether the fact of not saying "no" meant yes. If they were aware of what they were doing. If she knew what was going to happen. If the social and media pressure was forming part of the trial within the court itself.

For three years, the case of La Manada has awakened several debates that have been discussed inside and outside the halls of the Provincial Court of Navarre, the Superior Court of Justice of the community and the Supreme Court. Now, three years from now, the high court closes them bluntly with a sentence of 133 pages that establish jurisprudence on sexual crimes and convicts the five men to 15 years for a continued crime of rape. This is what the judges Andrés Martínez, Andrés Palomo, Ana María Ferrer, Vicente Magro and Susana Polo, the rapporteur, conclude on the controversies.

From the beginning, the key to determining whether it was an abuse or sexual assault was in bullying, which is, together with violence, the act that determines one or another criminal type. Legal sources point out that, while violence is easy to discern, intimidation is not so much so. Both in the first sentence, of the Provincial Court, and in the second, of the Superior Court of Justice of Navarre (TSJN), the courtrooms determined sexual abuse with prevalimiento because they understood that there was no intimidation. Now, the Supreme feels the opposite.

"From the proven facts, it is deduced that we are not facing minor intimidation that allows us to apply the figure of the prevailing, but rather a serious intimidation that should determine the legal classification of such acts as sexual assault", says the sentence. And remember that "the intimidating effect can be produced by the simple presence or concurrence of several people". From the legal point of view, they explain that there is not so much doctrine about intimidation, so this ruling helps establish jurisprudence about an event in which "there may be a very fine border, but this was not the case". "Here, the account of the facts clearly describes an intimidating situation"

The need for an express consent

"In the context described in the proven facts, the silence of the victim can only be interpreted as a refusal," the sentence states bluntly. It is not about the victim saying no, the magistrates align in this way with the "only yes is yes" that was also chanted in the demonstrations and that is part of the philosophy that the Government wants to impregnate in the announced change of the Penal Code in which they foresee to definitively eliminate the typification of abuse.

The five convicts acted "with full knowledge" that they violated the sexual freedom of the victim "without ever giving his consent". And he continues: "To accede means to consent to what someone asks or wants. It does not appear in the proven facts that the victim consented or agreed to maintain such relationships, or even subliminally. "

One of the ideas that inspired the high court for this ruling is that "A woman does not have to decide between being raped or killed" That is why, according to legal experts, the existence of a violation must not be determined by how much the victim resists. The sentence alleges that if an aggressor exercises a clear and sufficient intimidation, as in the case of La Manada, "the resistance of the victim is unnecessary, since what determines the type is the activity or attitude of the victim, not the one of this one ". And it affects, as already pointed out on several occasions throughout the process by prosecutors Elena Sarasate (TSJN) and Isabel Rodriguez (Supreme), it is not permissible "to force the right to extremes of demanding victims' heroic attitudes that will inexorably lead them to suffer greater evils ".

The credibility of the victim

The defense of the members of La Manada came to hire a private detective to follow the victim's steps in the days after the sexual assaults. The ruling of the Supreme Court recalls this fact and relates it to "an intrusion in his privacy (that of the young woman) that had her worried, even feared for her own safety". The Supreme Court thus clears another way: the fact that a woman tries to live a normal life in the days after being attacked does not imply in any case proof that what she denounces has not happened.

In front of the image of a "fun" described by the discrepant magistrate of the first sentence, the Supreme Court replies: "Hardly, the way in which the defendants left the portal, leaving the victim naked and alone, and removing one of them his mobile phone, are indicative of a" revelry "Agreed with her".

The risk of double victimization

Victims of sexual violence, or other forms of violence against women, suffer aggression and then a second process because of the taboo that surrounds these situations, the treatment of the courts or the pressure can turn them into double victims. The Supreme Court notes in its revision of the indeminization, which doubles from 50,000 to 100,000 euros and points out the moral damages suffered by it. It alludes to the transcendence and social impact of the procedure, as pointed out by the victims' lawyers or their revictimization in social networks that has supposed "even more pain and suffering, if possible, to be judged and mistreated."

The ruling expressly mentions the Council of Europe's agreement on the prevention and fight against violence against women and domestic violence, the so-called Istanbul Convention. Spain ratified it in 2014. It reproduces the article that talks about sexual violence and collects the considerations that this agreement makes about the consent, ratified by more than 40 countries. "The consent must be provided voluntarily as a manifestation of the free will of the person considered in the context of the surrounding conditions." This reference, in the judgment of the court, "makes clear the impossibility of interpreting an absence of physical resistance as such will, it must be expressed expressly or clearly deduced from the circumstances surrounding the event.