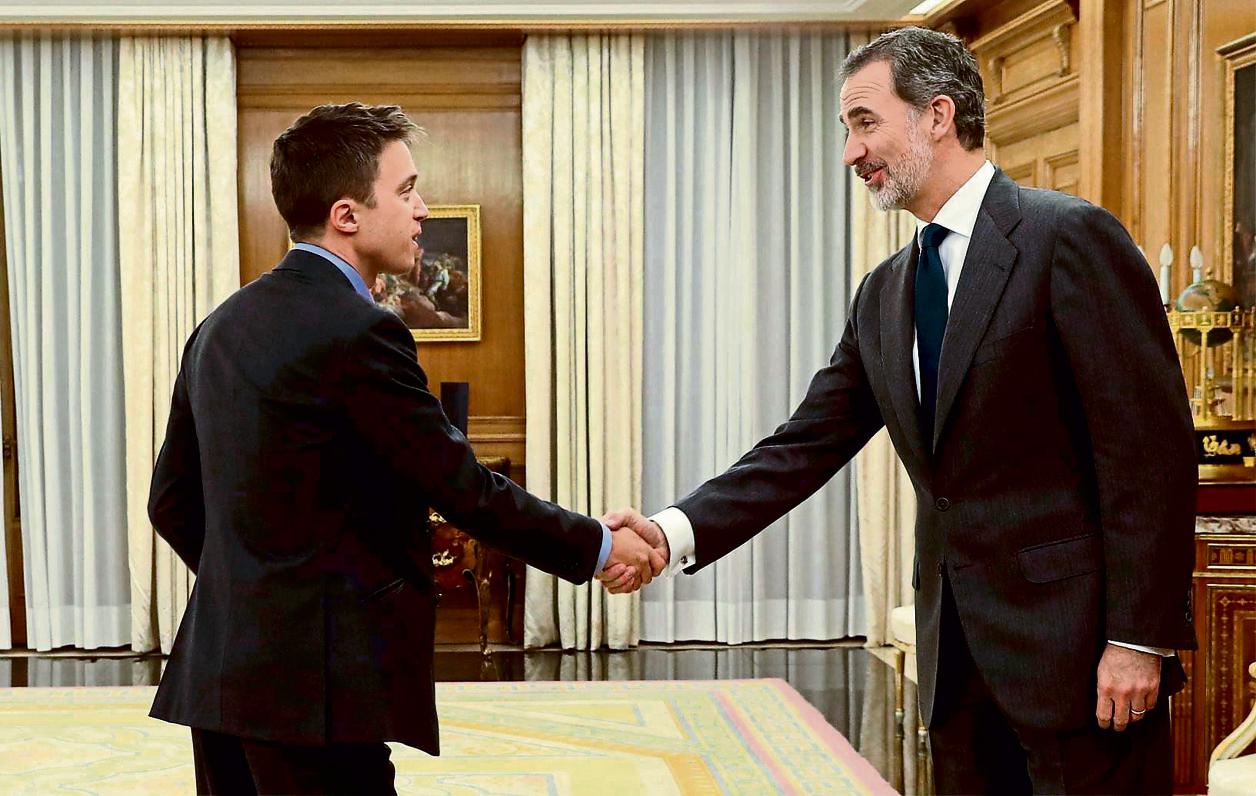 "This is a horror." This is how Ana Oramas described, from Canary Coalition (CC), the impression he transmitted to the King, in his meeting yesterday during the round of consultations for the investiture. The horror was the description, he explained, that she had done to Philip VI of the situation in which the negotiation for an agreement that, more than investment, he added, must be "governable," and that right now depends on those "who are brought to the pairo the governance and stability of this country."

"It is a horror that the PSOE negotiates with ERC, a party that brings everything to pairo"


Oramas alluded to the negotiation of the PSOE with ERC, which has pending the rest of the groups, to those who yesterday announced to the Monarch their predisposition to the favorable vote, and much more, of course, to those who, as in the case of the deputy of UPN, Javier Esparza, and that of Asturias Forum, Isidro Martínez Oblanca, have decided not to vote for the executive and the program presented by Pedro Sánchez, if it is finally proposed by the head of state to form a government. The possibility of an understanding with the independentistas also horrifies both deputies, to the point that Esparza came to speak favorably to a third general election, in his opinion a lesser evil before Spain has a government of PSOE and United We Can That depends on independence. "I hope this negotiation against nature ends up breaking."

Despite the horror of Oramas, the Canarian deputy did not prefix the meaning of her vote, but complained about the lack of available information – both about the agreement between PSOE and ERC and about the coalition pact between Sánchez and Pablo Iglesias – and the lack of diligence of the Socialists to meet with the other forces of Parliament to which they will ask for support, starting with the PNVcited, "Errejón, Commitment or Canary Coalition. ” In any case, he said, the final decision will not be taken by her: “I only express my opinion, that this is horror. The meaning of the vote will be decided, when we have the information, the organs of my party, in which I will express my opinion. ”

Less belligerent was its co-deputy deputy of New Canary (NC), Pedro Quevedo, who did announce his favorable predisposition to facilitate the investiture, since the commitment of his political formation is "to end the blockade". Nor did he want to draw red lines with respect to the PSOE pacts with United We – regarding whose pre-agreement he expressed his positive opinion – or with ERC, arguing that the only red line for his party is obviously not to negatively affect Canarian interests.

"Everyone wants an endowment as soon as possible, but let's give time to time"

Regarding a possible dissent in the sense of the vote of Nueva Canarias and Coalición Canaria, Quevedo stressed that, although they concurred in coalition with a joint program and the will to act together, the agreement does not imply an identical vote in all matters, and not He considered that dissent likely, but he did not rule it out either.

Yolanda Díaz and Tone Gómez-Reino, of Galicia in Common (GEC), communicated to the King their support for the investiture of Sanchez, and informed the Galician agenda for the legislature, which passes through the AP-9 highway is public and free, support the industrial fabric, defend health and Marine salvage management. Díaz was optimistic but cautious about the investiture and did not give information about the program, portfolios or dates: "Time to time".

“I hope this negotiation against nature is broken; I prefer other choices ”

Both Joan Baldoví and Íñigo Errejón, of the coalition Commitment-More Country, agreed to be in favor of the coalition government, although both placed a portfolio of priorities as the basis for a negotiation with the PSOE that has not occurred. Baldoví was optimistic about the position of the Socialists regarding regional financing, and Errejón demanded Sánchez ambition in his application of what he called "the green revolution", one of the three legs of his claim to the government, being the social justice and the fight against sexist violence the other two. And similarly, favorable to the investiture but cautious, the PRC deputies, José María Mazón, and Teruel Existe, Tomás Guitarte, were shown, although the latter indicated that his commitment is the non-repetition of elections, and therefore would support Sanchez also if he seeks support on his right.

The spokesmen of the mixed group also spoke of the need for the ten groups that integrate it to be divided to form two groups and improve their visibility. In this regard, while Oramas is committed to a technical solution (a partition based on the seats and percentage of votes), both Errejón and Mazón prioritize a division by political affinities.