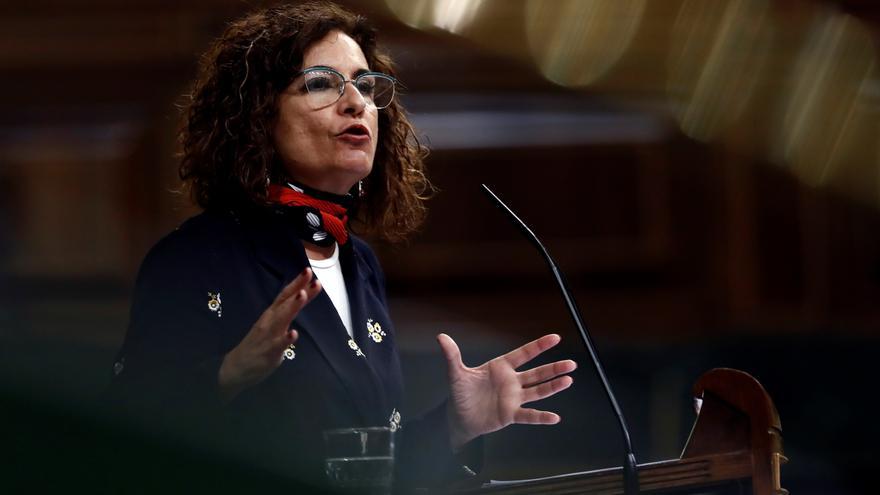 Abstention has become the right wing’s tool to avoid being sidelined by measures that they favor but do not want to approve because they are proposed by the coalition government. Both the PP and Vox opted for abstention before the suspension of the fiscal rules contained in the Law of Budgetary Stability and Financial Sustainability, a measure endorsed by the European Commission and that the Executive of Pedro Sánchez has adopted before the economic and social emergency of the COVID-19 pandemic. The measure went ahead on Tuesday with the favorable vote of all political forces except the abstention of the two right-wing parties and a vote against the deputy of Foro Asturias.

The Minister of Finance and Government spokesperson, María Jesús Montero, had used the argument of showing unity before society to ask for the affirmative vote of all political forces. Montero has justified the suspension of the rules that mark a maximum deficit and debt and an expenditure ceiling of 196,097 million euros, “an unprecedented figure for expansive budgets that protect families, defend the Welfare State and help economic recovery.”

The minister recalled that the suspension of fiscal rules is temporary and that the commitment to budgetary stability is maintained: “The activation of the safeguard clauses does not suspend the stability and growth pact, they only postpone it.” Montero has reproached the right-wing parties that have called a “spending party” what is a measure for an emergency situation. “This government does not seek solutions in budget cuts or austerity policy like the parties of the right,” he insisted.

Both the PP deputy, Elvira Rodríguez, and the Vox parliamentarian, Iván Espinosa de los Monteros, agreed to describe the situation as catastrophic, but blamed the Government for both the health situation and the economic crisis. Rodríguez has pointed out that the “temporary deviation endangers fiscal stability in the medium term” so it would be necessary to “return to fiscal orthodoxy” and that deficit and debt figures should have been brought to the debate even though it was not mandatory to comply with it. While the far-right deputy has admitted that it is “necessary to maintain expansive measures, it is clear, but spending could not be increased at will” and then warned that with the policies of the coalition government Spain “could go into default” .

Citizens chose their own path. The right-wing formation has criticized PP and VOX for abstaining and the Government for its “erratic economic policy” and proposing the measure without general lines that define the Budgets, although later its deputy María Muñoz Vidal has remarked that they would vote in favor “for responsibility”.

Both the PNV and ERC, Junts per Catalunya, EH Bildu, Más País and CUP have announced their affirmative vote to suspend the fiscal rules but have reminded them of the delay in bringing a rule that Brussels approved months ago and, above all, the Government action with the remainder of the City Councils, which meant a resounding defeat of the Executive in Congress.

Among the arguments of the nationalist and left-wing forces, the deputy of Junts per Catalunya, Ferrán Bel, has advised the Government that if they want the support of their formation for the Budgets, which will reach the Chamber in the coming weeks, they will have to raise a fund of 5,000 million so that municipalities have resources to fight against the pandemic. Meanwhile, the deputy of EH Bildu, Mertxe Aizpurua, has asked the Government to modify article 135 of the Constitution, which after the express constitutional reform of 2011, forces budget stability, and the PNV parliamentarian, Idoia Sagastizabal, has claimed “Review the Budgetary Stability Law so as not to confine the administrations in the future.”

The exotic touch has been given by the parliamentarian from Foro Asturias, Isidro Martínez Oblanca, who has argued that “indebtedness means setback, poverty and ruin and is the method that resolves the defaults of bad rulers” to vote against a measure backed by All Europe.