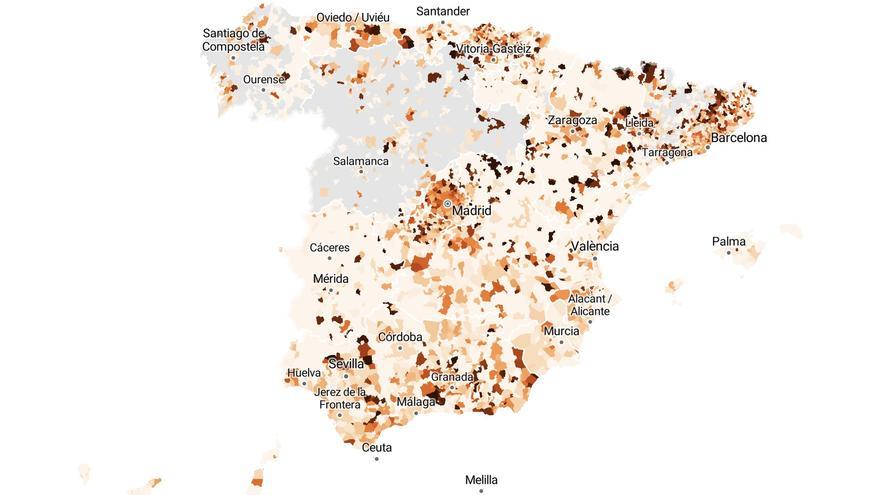 * Information updated with the latest data available as of March 2

The curve of the third wave collapses and the incidence of infections reaches the best records since the summer. Right now, only one in five large cities continues to be on a red alert due to transmission levels, registering more than 250 cases per 100,000 inhabitants in 14 days and less than 2% of the population lives in municipalities with incidences above 500 cases. Figures reached after a rapid decline in infections that is still repeated in practically the entire territory, although it is beginning to show signs of slowing down the rate of decline. Last week, almost 2,000 municipalities had managed to reduce their incidence by half in two weeks. Today there are 1,500.

The proof of the fall in infections registered in all communities is in the decrease in the number of municipalities at the most extreme risk levels. Above the threshold of 500 cases (0.5% of the population is infected every two weeks) there are only 296 locations left. The only large city in this group is Santurtzi, in the Basque Country, where 600 infections are registered for every 100,000 inhabitants in two weeks.

The decrease stands out especially in Dénia (-93% incidence in the last two weeks), Badajoz (-92%), Puerto Real (-89%), Logroño (-89%) and Ávila (-86%). A drop in cases to which most cities join, according to the analysis carried out by elDiario.es based on data from the health ministries of 17 autonomous communities and the autonomous cities of Ceuta and Melilla. More details on obtaining these data in the methodology.

According to the latest available data, less than one million Spaniards live in municipalities with an incidence of more than 500 cases per 100,000 inhabitants, double the rate that the Ministry of Health classifies as “extreme” risk. The figure represents a very large drop over that registered a week ago: two million people then resided in municipalities with more than this incidence.

In addition, there are already 20 million Spaniards who abandon high risk levels in the pandemic, when transmission is uncontrolled. Specifically, 4,300 municipalities already register less than 150 cases per 100,000 inhabitants in 14 days.