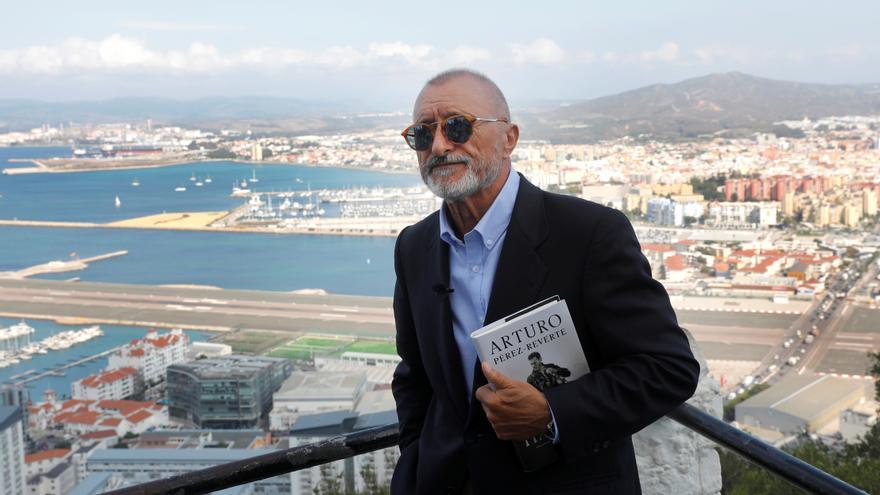 Gibraltar, Sep 21 (EFE) .- The writer Arturo Pérez-Reverte considers that only the idiots and the undocumented believe that those on his side are all good and the opponents all bad, and assures that his heroes do not have ideology, like those who populate his new novel, “The Italian”, a hymn to the homeland that is the Mediterranean.

Gibraltar and the bay of Algeciras are the setting for this new novel by Arturo Pérez-Reverte which, published by Alfaguara, has reached bookstores in Spain this Tuesday, with 180,000 copies, and Latin America, a book in which an episode is recovered that his father told him when he was a child and that he recalled in a visit he made today with a group of journalists to Gibraltar.

He was 11 years old when his father took him to see the film “Your best enemy”, by Alberto Sordi, in his native Cartagena, a film in which, as usual, Italians appear “pathetic and disorganized” in front of the effective English.

But on the way out – the writer and journalist recalled – his father told him that Italians had done very important things in World War II.

Among these episodes, the one starring the Orsa Maggiore group, made up of combat divers who, with sophisticated underwater equipment, dived into the sea and infiltrated the port of Gibraltar to sink the British warships that docked there on their voyages. . And they sank or damaged 14 Allied ships between 1942 and 1943.

For years he had this story in mind and little by little he gathered a “good library” and documentation on Italian actions at sea in World War II, until this novel, which “had been brewing in his head”, came to fruition. starting from an image.

A story to which he has also transferred part of the experience he acquired when, at the end of the 1960s, he trained in underwater activities at the Cartagena Navy Diving Center.

A NOVEL OF SEA, LOVE AND WAR

“The Italian”, named Teseo Lombardo, is one of these divers whom Elena Arbúes, a 27-year-old bookseller, finds on a walk on the beach, vanished between sand and water. By deciding to help him, he will start an adventure that will change his life through a plot of espionage in a land of frontiers.

This is why it is a novel about “sea, love and war”, explains Arturo Pérez Reverte to journalists next to the lighthouse from where the Strait of Gibraltar can be seen.

Furthermore, it is an “immersion in the Mediterranean as a homeland and the heroes who made it possible.” But he recognizes that Theseus Lombardo, the Italian in his novel, is not a hero, but just a soldier doing his duty.

It will be in the eyes of the bookseller that she acquires her hero dimension, a “cultured and lucid” look into which she projects her readings, despite the fact that she will be the true heroine of this story based on real events.

Amazing facts those of these divers who entered the water hidden in the darkness of the night and circumvented the safety nets of the port, has explained the writer, who assures that the English did not know how their ships exploded until the end of the war .

These actions, “of very Latin audacity”, Pérez-Reverte has assured, supposed the triumph of the individual in front of the military apparatus of the English: “they were able to do what the English were incapable of imagining.”

And that is why he believes that it is an act of justice to restore their dignity, since “the exploits” of these Italian units are very little known, maintains the author, who recognizes that it is a subject that has been “politically incorrect” in Italy for a long time. time because part of these men remained faithful to fascism while others opted for the allied side.

The protagonist of “The Italian” is, like those of all Pérez-Reverte’s novels, far from being “a compact and luminous hero”, something he believes to be “tremendously boring”.

“Life is full of nuances and black and white is a lie,” says the writer, who believes that “all heroes are ambiguous” and that, at this point in his career as a writer, everyone knows that their heroes are “on either side”.

And he criticizes that “stupid habit of believing that those of my side are all good and those of the other, all bad”. Only “the fools, the idiots, the undocumented or the malicious ones play with such manipulations.

Tags: are, believe, good ones, idiots, Perez, Reverte, side