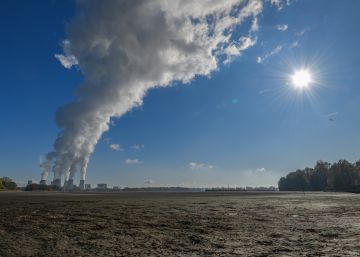 The start of the process by the Government of Donald Trump to withdraw the United States from the Paris Agreement It has unleashed a flood of public statements by presidents in defense of that pact. This has been done by leaders from China, France, the European Commission, Spain, Chile … Only the US has so far withdrawn from the agreement against climate change, signed in 2015 in the French capital. The rest of the big emitters – China, the European Union and India – are still inside. But one thing is to defend it through declarations and another is to be on the path of fulfilling the goal established by that pact: that the warming remains within manageable limits. A group of experts, led by the former president of the IPCC – the panel of UN advisory scientists – Robert Watson, has analyzed the commitments of the 184 countries that have presented emission cut plans so far and the result is that less than 20% of them are considered sufficient to meet Paris.

That 20% of achievers is dominated for the European Union bloc. At 28, Iceland, Lichtenstein, Monaco, Norway, Switzerland, Ukraine and the Republic of Moldova are added. All of them, according to this analysis sponsored by the organization Universal Ecological Foundation (FEU), have cut-off plans that set reductions for 2030 of their greenhouse gases by at least 40% compared to 1990 levels. In the case of the EU, Liliana Hisas, executive director of FEU, estimates that some projections suggest that the approved measures will lead to a reduction of up to 58% of those emissions.

The Paris Agreement it obliges all states that join the pact to submit plans to cut their greenhouse gas emissions, guilty of overheating the planet according to the majority of the scientific community and linked, mainly, to the use of fossil fuels. So far, 184 States have presented cut programs, which are disparate and in many cases difficult to compare. These plans to cut all countries should serve so that the average increase in temperature on the planet stays below two degrees compared to pre-industrial levels and as far as possible below 1.5.

The report prepared by this group of specialists sets a goal to evaluate the objective of 1.5 degrees to the States. And, as they detail, to get the temperature to fall below that threshold in 2030, global emissions must have been reduced by 50% compared to 1990; and in 2050 zero emissions will have to be achieved. By analyzing the countries' cut plans for the next decade, these experts conclude that only that 20% of countries are on the path to meet that route of eliminating their emissions. The rest, at least in the commitments presented to the UN, is not well on track.

"We are in a critical situation," warns Pablo Canziani, a PhD in Physical Sciences and a member of the IPCC. Because the sum of all current contributions will lead to an increase of more than three degrees, as the UN has already warned. "This means that measures to address climate change must double or triple in the next decade to reduce emissions by 50% by 2030," the report explains.

The study suggests that 75% of the 184 plans presented so far are insufficient to curb climate change. Then there is a small group of States, 12 countries that represent 5% of the total, which the study determines that they have "partially sufficient" plans.

The problem is not only numerical, that is, it does not only reside in that 75% of the countries are not on the right route. The main obstacle is the volume of greenhouse gas emissions from countries that are not being ambitious. Because the EU only already represents 9% of global emissions, the report recalls. The main issuers are now, in addition to Europe: China (26.8%), United States (13.1%), India (7%) and Russia (4.6%). China and India fall into the red category of the report, that of countries with insufficient cut plans. Russia has not even submitted its own. And the United States – whose plan dates back to the Obama era and is also considered insufficient in the report – has started the way out of the agreement.

"We are very far from reaching both grades," warns Canziani. "And the longer the measures are delayed, the greater the economic and socio-environmental costs." The report recalls, for example, that the economic losses and damages of the 690 extreme weather events of 2017 meant losses of 330,000 million dollars. By 2030, the researchers warn, they are expected to have doubled.

But not everything is bad news. The Paris Agreement itself establishes an upward revision schedule for national emission cut plans. In 2020 the first review will take place and there are about 70 countries that argue that they will present new contributions, although neither India, nor China, nor Russia are still within that block. The climate summit to be held in December in Madrid should serve to achieve the commitment of more states to increase their ambition against global warming.

The report points out that "97% of the 184 climate promises are the same as those initially presented in 2015 and 2016", when the Paris Agreement was closed. So far, only six countries have reviewed their plans: four have promised stronger cuts and two have weakened their goals.

"This report is a wake-up call to new leaders," says Canziani. "It takes a leadership of the most emitting countries and citizens living in the countries with the highest per capita emissions," concludes this researcher.

A group of more than 11,000 scientists have joined a manifesto, published in the journal Bioscience, in which he warns that "planet Earth is facing a climatic emergency". The paper recalls that 40 years ago, scientists from 50 nations met at the first World Climate Conference in Geneva (in 1979) and already warned of "alarming trends" about climate change and the need to act. Four decades and several dozen summits and two climate agreements later, "greenhouse gas emissions continue to increase rapidly, with increasingly damaging effects on Earth's climate."

Therefore, these scientists ask that efforts be increased to preserve the planet. And they propose that measures be applied in six specific fields: energy, pollutants of short duration, nature, food, economy and food. The signatories state that the necessary changes involve "major transformations in the way our global society functions and interacts with natural ecosystems." And they applaud the global movements led by schoolchildren that are raising awareness.