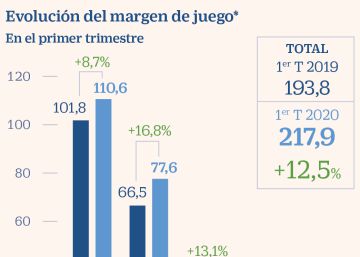 The different forms of online gambling more than compensated in March for the fall in sports betting, the main source of business for virtual operators and whose activity was paralyzed since the middle of that month due to the suspension of sports competitions, forced by the coronavirus pandemic.

In March, the last month with statistics produced by the General Directorate for the Regulation of Gambling (DGOJ), dependent on Alberto Garzón’s Ministry of Consumption, the gaming margin of virtual operators reached 67.5 million among all modalities, a 5 % more than the same month of the previous year.

The margin of play is a key magnitude for the sector. This reflects the amounts played by the users once the prizes delivered by the operators have already been discounted. That is, it is the margin that is already in their possession. This grew by 5% despite the sharp drop in the betting business, which under normal conditions is more than half of what online gambling generates. Its margin fell 15.4% to 27.1 million euros.

Something that offset the rest of the gaming options, which grew significantly during that same month. Casino games, which is usually the second category by generated business, did so by 15.4% to 28.1 million, beating gambling; poker games grew 47.3% to over 10 million; online bingo halls rose 37% to 1.5 million, and contests shot up 1,326% to close to 600,000 euros.

Some increases that led the Ministry of Consumer Affairs to decree the prohibition of online gambling advertising outside a time slot from one to five in the morning. Then, Minister Alberto Garzón explained that strong increases had been detected in the different categories of online gambling since the confinement was decreed, although he did not detail them. The DGOJ data do reflect that trend. That March 31, the employers’ association of online operators, Jdigital, explained in a statement that since the state of alarm, revenues had fallen “notably” due to the drop in betting. Official data shows that, at least in March, the margin of operators grew thanks to the rest of the games.

It also did so in the period between January and March which, in fact, is already the quarter with the highest gambling margin generated by online operators since the DGOJ began collecting data in 2013. As a whole, the sector reached 217.9 million, 12.5% ​​more than in the same quarter of the previous year; 17% more than in the last of 2019 and 250% more than seven years before.

Growth that does not contradict the fact that recent months have been critical for the sector as a whole. The March data still reflected half a month of contribution from sports betting, with games like the Champions League played until just days before the state of alarm in Spain.

The income generated by this modality was reduced to practically zero for almost two months. It was not until the second half of May when competitions were reactivated, first with the German soccer league and already in June in Spain. The return of other tournaments such as the American basketball league, the NBA, or Formula 1 or MotoGP races have served the sector to regain some momentum.

This is preparing so that, presumably in October, the Government approves the law that will prohibit the advertising of online gambling except from 1 to 5 in the morning.