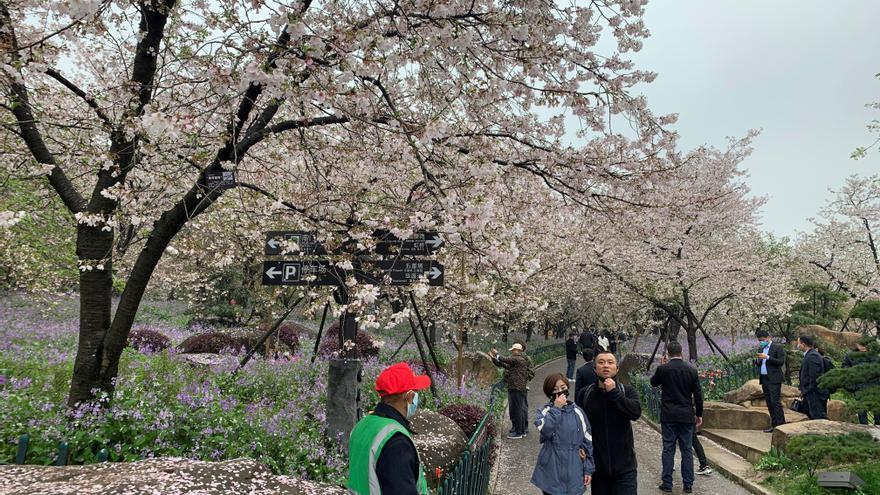 Wuhan (China), March 22 (EFE) .- One year after the first global confinement by the covid, the Chinese city of Wuhan, in which the first outbreak of the disease that caused the pandemic was registered, can once again celebrate its cherry blossom festival, one of his signs of pride.

In total, there are more than 500,000 cherry trees in the city, although tourists usually choose two specific parks to walk among them: Wuhan University and East Lake.

In the latter, whose officials say that it is at the same level as that of Hirosaki (Japan) and that of Washington thanks to its 10,000 cherry trees spread over more than 28 hectares, hundreds of people gathered despite the cold morning mist and a drizzle that it caused trees to lose petals faster than usual.

The occasion deserved it: Wuhan suffered one of the strictest confinements in the world from January 23 to April 8 of last year, so its inhabitants were left without celebrating the lunar New Year, the main holiday of the year in the country , and the cherry blossom festival, its local pride.

Last year the trees only received virtual visits, with more than 4.5 million people participating in the first day of a series of live broadcasts in which Internet users from other parts of the country less affected wanted to send messages of encouragement to the Wuhan .

And on March 13 and 14, with the virus as a bitter memory that the inhabitants of the city do not want to go through again, the city parks wanted to pay tribute to the doctors who came to help in the early stages of the pandemic with special visits to cherry blossoms.

THE FLOWERS OF “HOPE”

The director of the Parque del Lago del Este, Zou Hui, explained to Efe that these flowers are not only an announcement of the arrival of spring, but also “represent hope.”

Last year, many Chinese showed on social media their intention to visit Wuhan to help the economic recovery of the city, and Zou explains that in his park they are already receiving up to 80,000 visitors a day with the blossoming of the trees.

Far from there, more than 50 cherry trees adorn the garden of the former Qingchuan hotel – now controlled by the American chain Holiday Inn – the first hotel to accept foreigners in Wuhan.

Wallace Wang is not only the manager of the establishment, but he himself was the one who planted, in 1983, some of those trees that reign on a historic hill located on the banks of the mighty Yangtze River.

“Every year we have many tourists who come to Wuhan to see the cherry trees. On weekends we have an occupancy (rate) of 60 or 70 percent in the hotel. It is very important to us,” he acknowledges.

Wang assures that the arrival of tourists from other parts of China is already in figures of two years ago and is “optimistic”: “Personally, I am confident that we will get better despite having gone through hard times last year.”

SOME TREES WITH HISTORY

In addition to their ephemeral beauty, the Wuhan cherry trees are important in China for being one of the memories of what is known in the country as the War of Resistance (1931-1945), the Second Sino-Japanese War.

In the late 1930s, the Japanese occupied Wuhan and turned part of the local university into a field hospital where, according to official history, a Japanese general wanted to plant cherry trees to boost the morale of the soldiers.

Thus, in the spring of 1939, the first cherry trees were planted in Wuhan, more than twenty located within the campus, which survived the war.

When the exiled university staff returned in 1947, there was a debate about what to do with the trees planted by the already expelled invaders, finally deciding to save them as a memento of the suffering inflicted on the locals during the conflict.

According to local media, the professor who had been in charge of protecting the university during the occupation, Tang Shanghao, assured that “although they were planted by the enemies, the trees were innocent and should live.”

Years later, after the normalization of diplomatic relations between Beijing and Tokyo in 1972, the Japanese authorities gave a thousand cherry trees to the then Prime Minister, Zhou Enlai, who planted some of them at the University of Wuhan, where he had lived.

Since then, thousands of trees have been planted in the city, where every March many streets and parks turn pink for a few days.