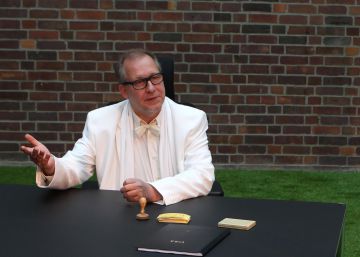 Mynämäki is located in the southwest of Finland, it has almost eight thousand inhabitants and its surface is 536.08 square kilometers minus one square meter, which German artist Peter Kees annexed on June 14, 2013. Kees has been developing an artistic project for years in the framework of which he “liberates” small surfaces that he marks and appropriates: in this way, he proposes a reflection on how we should live, on our relationship with the physical world and on the supposed exhaustion of utopian projects that resonates especially at this time, when the future seems less predictable, or much darker, than ever.

Kees created Arcadia in 2013; that of Mynämäki (N 60 ° 36 ‘31.05 “/ E 21 ° 50’ 32.12”) was the first square meter to be annexed, but its imaginary country already extends through the national territories of Germany, Switzerland, Austria, Countries The Netherlands, Belgium, Greece, the Czech Republic, France, Hungary, Lithuania, Italy and Poland: in each of these countries there is one or several square meters appropriated by the German artist as part of a kind of post-nation, a site on the that national authorities cannot exercise their sovereignty, that it lacks territorial unity, laws and institutions. Arcadia It is an idea, but its creator (and ambassador) has believed it necessary to translate it into autonomous and dispersed territories, withdrawn from the control of the populations and the symbolic violence of anthems and flags; anyone who wishes can “live in” Arcadia despite the fact that, of course, the space is limited.

Peter Kees is a conceptual artist who prefers to define himself as a “chronicler and surveyor of social and human phenomena”; His interest lies in exploring the perception of borders and in questioning the ideas established around issues such as what is a country, what is property, where to find refuge and how and for what reason we consider a site “ours”. At a glance, your Arcadia could be one more of the numerous moderately virtual nations that exist in the world without us noticing them except when they are in the news, as has happened for a few days with the territory called Nagorno Karabakh, for which Azerbaijan and Armenia have been fighting for thirty years in a “low intensity” war. But actually, Arcadia belongs to the attempts to give entity to utopian projects of human organization as Christiania, an old military base in central Copenhagen annexed in 1971 by squatters; Oyotunji, the Yoruba kingdom of the State of South Carolina that tried to reverse the tragic consequences of slavery; Sealand, an abandoned rig ten kilometers from Suffolk, in international waters, briefly turned into a data mining tax haven; and the Fordlandia from the Brazilian jungle: it is, in the words of its author, “a poetic answer to our sophisticated and corrupt civilization. […] One square meter of Arcadia is one square meter of freedom, one square meter of shelter, one square meter of happiness, and it is an action that raises questions about the ideal state of society and the individual ”.

Kees approaches in a playful and highly visual way to problems that resonate especially in our days, when the total or partial confinements caused by the pandemic force everyone to look for “liberated” areas (the home, mainly) in which to resist the imperatives of The time. But its topicality is not determined only by the coronavirus crisis: the artist usually chooses carefully the sites that he releases, often in relation to the news that he serves as a comment. A few years ago, he asked the prime ministers of Israel and Palestine to hand over to Arcadia a square meter located on the border between the two territories in what he defined as an appropriation “that would lead to seeing the light between so much hatred and so much death.” as Antonio Pau recalls in his book Manual of Escapology: Theory and Practice of the Flight from the World (Trotta, 2019). Kees has yet to receive a response from authorities.

Its last annexation to date took place on May 29, 2019, when it took possession of a cubic meter of the Mediterranean Sea; Located at the coordinates N 36 ° 50 ‘22.56 “/ E 14 ° 23’ 27.06”, the new territory of Arcadia is located between Sicily and Malta, on one of the most frequented routes by those trying to reach the European coasts, as well as the place where more people have drowned in recent years due to the indifference of national and community authorities who, on the one hand, propose to confront racism in institutions but, on the other hand, they prevent rescue ships such as the Open Arms dock in its ports. “Which is more cynical, letting people drown or raising the Arcadia flag?” Kees wonders. “The longing for a harmonious and happy world rooted in the arcadian ideal can well be understood as a critique of the conditioning factors of our time and its social systems,” he says. In a more general way, its annexations answer the question of how to continue to believe in the utopian project par excellence, that of ending the domination of man by man, as well as of man over nature. A question answered long ago by Walter Benjamin, who stated: “It is only for those who have lost all hope that it is granted to us.”

“After the death of Galdós, his presence on the scene has been very scarce”

The Regenta holds a discussion table around the exhibition ‘On Gravity’