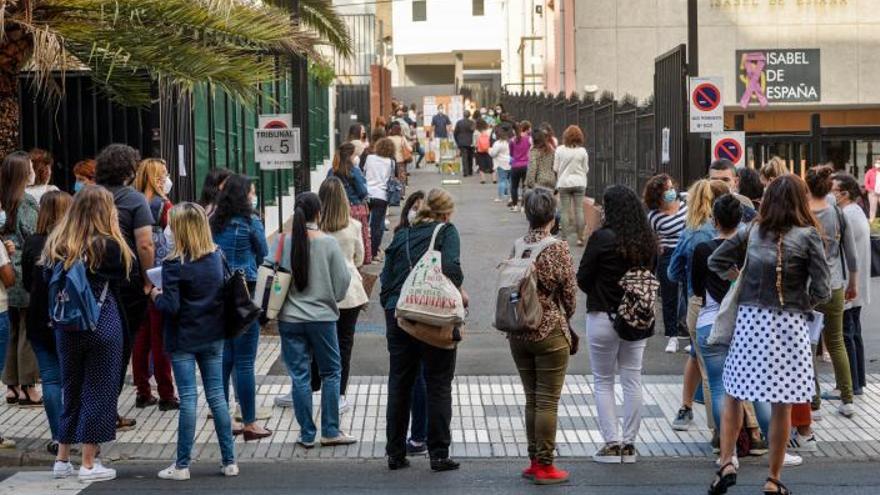 Achieving a fixed position as a teacher has become the goal of 16,951 people in the Canary Islands, but only 1,377 will achieve their goal. This means that one in every dozen applicants will get the much-desired job as a Secondary Education, Vocational Training or Official Language School teacher. Tomás Morales street in the capital of Gran Canaria lived yesterday Sunday at 8 in the morning, an unusual activity for those hours. Hundreds of opponents crowd in front of the doors of the three educational centers that are located in this central street. Some look at their notes for the last time and others immortalize the moment with their mobile phones or talk nonchalantly with their colleagues. The profile of the applicants is very varied: from teachers with decades of experience, through beginners in the art of opposition and candidates with many attempts in the backpack, to professionals from different sectors, such as tourism, who have chosen to redirect their careers, in order to seek job stability afterwards the difficult months of the pandemic.

The latter is the case of Diana San José, who is competing for the first time in her life, after the Covid-19 pandemic took away her employment as an official guide of the Autonomous Community of the Canary Islands. "I am already on the lists, but I have to present myself to be able to continue in it and perhaps improve my position," says San José. Who has a degree in Hispanic Philology and has spent years in contact with groups of children and adolescents, whom she used to accompany to discover the natural and cultural wealth of the Archipelago.

The process involved in competitive examinations is complex and stressful. This is how José Miranda defines it at the doors of the Pérez Galdós Institute, while he waits to be appointed to enter the center and take his examination of the specialty of Socio-Community Intervention. Miranda is a psychologist and currently works in the Social Services sector. "This is my third attempt, but I do it only by legal mandate, to be able to stay on the lists, not by desire," explains the applicant, who sees this Public Job Offer (OPE), as "an opportunity to gain stability" .

Among the novice opponents is Francisco Angulo, who opts for the specialty of Geography and History. With more enthusiasm than nerves, Angulo walks through the doors of the Tomás Morales Institute after spending six months preparing for the tests. "In the opposition system luck also influences, depending on whether your court is more or less benevolent", points out Angulo. Who makes a positive balance of the time in which he has dedicated himself to teaching, both in private and public centers. Fortune begins to play its role at the moment in which each court draws five balls with the themes that the candidates can choose to develop. From there, four and a half hours begin in which the die is cast.

Among the opponents there are also those who are already dedicated to teaching. Gloria Jiménez, after twelve years as a teacher of Language and Literature in a subsidized center, aspires to take the step to public education. "This has not been the best year to be able to prepare for competitive examinations, because we have experienced a very intense course due to the Covid-19 pandemic and everything that this situation has meant in the classroom," says the teacher. On this occasion, Jiménez lives the process calmly, since it is his second attempt and he already knows the mechanism of the opposition process.

Yesterday was her fifth attempt, but María Eugenia Torres does not lose hope or desire. "I come with the intention of getting a place as a Language and Literature teacher, because I have been preparing and trying for more than ten years," she points out at the door of the Isabel Institute of Spain, surrounded by dozens of professionals who share the same goal with her. Although, Torres acknowledges that "preparing for a competitive examination is very hard," especially for those people who, like her, work and have children. This opponent is one of the many people who have been working for the Education Minister for years as interns, but without having a fixed position that gives them job stability. After nine years in the classrooms of public centers in the Canary Islands, Torres continues to show his passion for transmitting knowledge and values ​​to the youngest, although he admits that not all his students make it as easy for them. In addition, this course, highlights the teacher, has been fraught with a lot of uncertainty and has meant a double effort for teachers due to the regulations imposed to stop the expansion of Covid-19.

Precisely, those sanitary measures that the teachers have monitored during the course - hand hygiene, safety distance, separate tables and mandatory use of masks - are those that the opponents found in the centers where the tests were held. In order to avoid possible infections, "the applicants entered the classrooms in a staggered manner and in alphabetical order," explains José Iván Zamora, coordinator of the collaborators of the Tomás Morales Institute. In addition to their ID, the opponents had to deliver at the entrance of the center a document proving that they have not had symptoms compatible with the virus and that they have not been in close contact with any person infected with the disease in the last 10 days . "There have only been four or five people to whom we have had to complete the declaration here, because the rest have come with them prepared from home," celebrates Zamora.

However, for the Canary Islands Teaching Workers Union (STEC) these measures were insufficient, which is why they brought the call for opposition to the Superior Court of Justice of the Canary Islands (TSJC) which, after studying the union's request and the response of the regional government rejected its suspension, just two days before the tests began.

The selective examinations that were carried out jointly throughout the weekend, the so-called first phase, which is based on a theoretical agenda and a practical case, leads to a second phase that will be convened by each court individually, according to specialty and note. It is a personalized test in which each applicant will have to make an oral defense of their teaching and learning program.