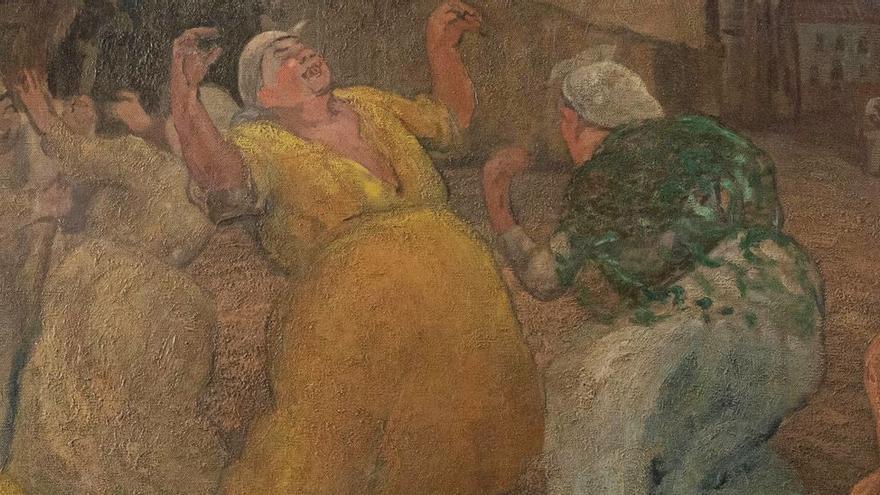 The Evaristo Valley Museum Gijon has just announced the appearance of one of the great "carnivals" of the artist, a painting dedicated by Valley to the Antroxu Asturian, after almost a hundred years in unknown whereabouts. This is the work "Carnavalada en Cimadevilla", and it went on sale in September of last year at an auction house in the English city of Bristol, from a rich family collection. Despite the fact that its starting price was much lower, the bidding for Valle's work was animated among several European interested parties and finally the painting was sold for 8,500 pounds, almost 10,200 euros. And the work was not even identified, since it was listed as "Street scene with peasants. From the Continental School."

The page of the auction house where the sale of the Valle painting is recorded.

It so happens that a year earlier, in 2020, a photograph of the original state of the work, a vintage copy from the artist's own personal archive, was part of the exhibition “Valley, revealed”, as part of a documentary section where the visitor was shown paintings under the heading "Wanted".

"Carnival in Cimadevilla" It is currently in a private collection in the United Kingdom whose owners were the ones who "kindly communicated its acquisition to the Museum", they explain from the Gijon center. And despite the initial skepticism, since "for every hundred times that we are informed of the purchase of a Valley, it turns out to be true once", says Gretel Piquer, a Valley expert, it was finally possible to verify that, "indeed, the canvas presents repaints that undoubtedly correspond to the changes that can be observed between the two states of the work". Not only that, "as soon as we saw the photo that they sent us of the painting, one of the main characters was already identified, almost without a doubt, by his gesture, replicated in other works by the author."

According to the experts from the museum in Gijón, this has been the first time that a work by Evaristo Valle has been sold on the international market and its appearance in Bristol is explained by the exhibition activity of the painter in the 1920s. Valle undertook his first trip to London at the end of the winter of 1923, according to his own words "on an adventure, with the box of pictures" and with the idea that it would be a trip that would help him land later in New York, which did in 1927.

Thanks to the correspondent Tulio Bonafoux, son of the late journalist Luis Bonafoux, who had been his main supporter during the years that Valle lived in Paris at the beginning of the 20th century, the painter was introduced to Paul George Konody, influential art critic in The Observer and Daily Mail, who was enthusiastic about his work and offered to find a room to exhibit it. However, everything was busy and it took a year to find a suitable venue.

Between May and October 1924, Valle made several trips to London to prepare the ground and finally opened his exhibition on November 19 at the Dorien Leigh Galleries, in the 7 Cromwell Place, South Kensington, property of the famous photographer Emil Otto Hoppé, who portrayed the painter. The exhibition was open until December 3, with twenty works: six carnivals, three landscapes and mining and peasant scenes. Some were recently made canvases, others were a few years old and, as in the case of the Carnavalada in Cimadevilla, they had possibly already been repainted.

The interest and excellent reviews that Valle's painting received in England were undoubtedly due to its documentary character and originality, in comparison with the Spanish painting that had been seen a few years earlier in London, at the Spanish Art Exhibition held at the Royal Academy of Arts, between 1920 and 1921, and, above all, to the common places of a Spain for tourists that Zuloaga continued to cultivate. "For the English public and art critics, the Asturian landscapes were recognizable by their resemblance to Brittany, Cornwall and the west of Ireland, and in the scenes the austerity of Zurbarán, the atmospheric perspective of Velázquez, the fantasy of Goya and the Millet's social content", they explain from the Gijon Museum.

Experts in the work of the painter from Gijón consider that in addition to "Carnavalada en Cimadevilla", it is very possible that other of his paintings remain today in the United Kingdom, without any news of it at the moment. It is known that the painter gave a canvas to Konody and it is probable that Tulio Bonafoux acquired his work or was given one as a gift, in memory of the patronage of his father, that Valle had never forgotten. The Bonafoux owned a property in Normandy and already in the 50s, Tulio Bonafoux would write to Valle that all the paintings that his father kept there had disappeared, as the house was destroyed by the soldiers, without being able to determine if it was during the First World War. or World War II.

In addition, Country Life magazine proposed that one of Valle's works be acquired by the Tate Gallery and The Morning Post encouraged the industrialist to do the same. Samuel Courtlaud, who had established an acquisitions fund for the National Gallery and the Tate Gallery. But the idea of ​​waiting in London until this procedure was resolved, perhaps another year, discouraged the artist and, fearful of his agoraphobia, which always threatened him when he spent long periods of time in large cities, Valle returned to Gijón in January 1925, without completing an operation that would have meant his entry into what is now the most visited museum of modern art in the world.