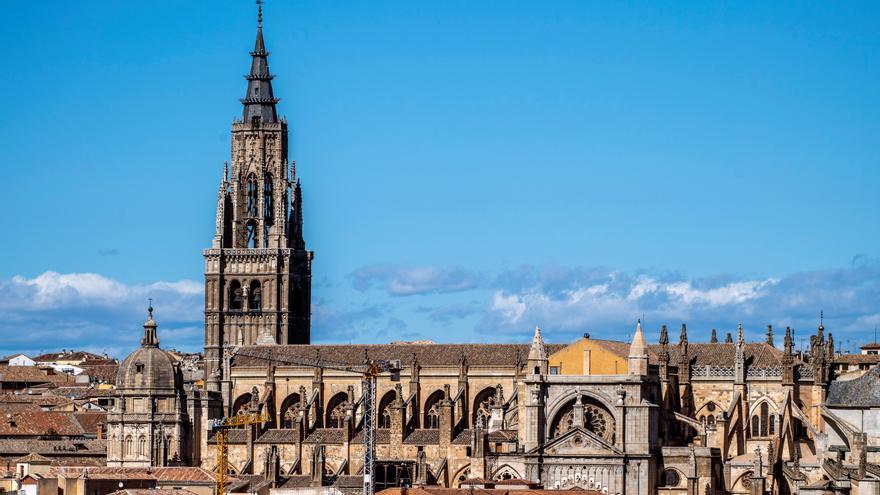 The meteorological effects of the storm Filomena, which left historical snowfalls in much of the Peninsula, took two weeks to dissipate. Damage to artistic heritage still persists. The roof of the Cathedral of Toledo was so battered that water has since seeped uncontrollably through the building’s Transparent, seriously damaging the most spectacular baroque genius of the Spanish historical legacy. In the last Council of ministers and ministers before the summer, held on August 3, the emergency declaration of the roof restoration works for an amount of 984,035 euros. The Cabildo de la Catedral Primada had requested aid from the State after reviewing the situation.

As eldiario.es has learned, the humidity has affected the wall paintings, which are falling off the inside of the wall that supports the Transparente. Despite the emergency of the intervention, the Church will not allocate a single euro to recover the parts damaged by the water. Once both the Dean, Juan Miguel Ferrer, and the person in charge of works were asked about the investment that the Cathedral will allocate to the recovery of the affected paintings, the answer has been clear: “At this time it is not contemplated.” None of them wanted to clarify in what state these paintings are.

The entrance fee to the Cathedral collected by the Church, owner of the building, is not cheap: 10 euros for general admission. Before the pandemic, the monument could receive up to 10,000 visitors on a Sunday and a million people a year.

Alba García Bernabé, architect of the Institute of Cultural Heritage of Spain (IPCE), and José María Ballester, head of the area of ​​interventions in buildings of the IPCE, have been responsible for the emergency drafting of the action plan on the roof that has started some days ago. García Bernabé details to this newspaper the damage they have found as a result of Filomena’s incident: loss of a large part of the covering material, leaks on one of the stained glass windows and multiple leaks that threaten its interior decoration. “There are paint flakes”, says the architect. In the upper stuccoes they have not yet seen damage because first the paint comes off and “falls like dry leaves” to the ground.

“There is a critical situation of risk of patrimonial loss. The objective of the works is to recover the stability and tightness of the enclosure or skylight of the Transparente, avoiding irreparable damage and guaranteeing the safety of the visitors against possible landslides”, indicate the experts. El Transparente is the work of Narciso Tomé, who made it between 1725 and 1732 commissioned by Archbishop Diego de Astorga y Céspedes, to illuminate the Sagrario chapel, behind the High Altar.

Tomé’s genius was to create an altarpiece that extends beyond the wall and rises to the ceiling and opens a gap in it without putting the building at risk. The artifice illuminates at will a complex iconographic program in which all the arts act with the mission of causing a unique effect and experience. They called that artistic communion of painting, sculpture, architecture and, of course, scenery, Bel Composto and it happened, above all, in Bernini’s Roman works. In Spain, in addition to the simulacrum of Toledo, the one rehearsed by the architect Francisco Hurtado Izquierdo, in the Sagrario de la Cartuja de Granada, is worthy. Benito Pérez Galdós did not like it. He said that it was “a pattern of shame”, that it lacked common sense, that it was absurd, foolish, pedantic, grotesque … “It looks like a marble rock, covered with gold crustaceans,” the description finished.

For the next nine months, the operators will focus on the wooden structure of the Transparent light body, the part most affected by humidity and decay. At more than 25 meters high and with a very difficult access to that body that rises above the deck. “Getting there with the material is going to be very complicated. We have almost assembled the scaffolding of a dust jacket to protect the Transparente from the imminent rains,” say the IPCE experts, who have drawn up the emergency project. The processing of the aid was carried out in seven days. There was no time to lose and the detail of the condition of the roof will be studied on the spot.

“It is not a typical cover. It is almost a sculptural piece,” says Ballester. Describe the peculiar cover as a skin of scales. Each slate tile is different, they are not made with an industrial process and they do not have usual shapes. “We cannot make a normal intervention: we must disassemble piece by piece to reuse what we can and include new ones, which we will do with the same type of slate and respecting the forms,” ​​says the architect. They will manufacture to measure the ones that are missing. An architect from the area has carried out the historical study with which they have discovered the origin of the original materials from the invoice that is preserved from the 18th century.

For the reinsertion of each tile they have used drones and 3D lasers. With these tools they have made the lifting of the roof to form a huge puzzle, in which it is clarified how many pieces there are and where each one of them is placed. In addition, a real model will be made to catalog, classify and keep track of each blackboard. “It is impossible to know how many pieces the cover is made of, but several thousand”, they indicate. Alba García Bernabé says that it will be a “peculiar and extreme” case because nothing will be thrown away. “There will be no debris. What is recovered will be recognized”, account of this very special intervention from which the Cathedral of the city, declared a World Heritage Site by UNESCO, will benefit in 1986.

The new scales will be made, one by one, by a local craftsman. The wooden structure to be replaced will be with nearby wood, similar to the one used three centuries ago. The mission is that the cover does not lose its authenticity. “And so the packaging will continue to be a historical piece,” says Ballester. For everything they recognize that it is one of the most careful projects in which the IPCE has worked. They will also have to remove any previous restoration that did not respect any of the above and cemented, for example, the internal structure of the roof. Finally, the factories, walls and vaults will be consolidated.