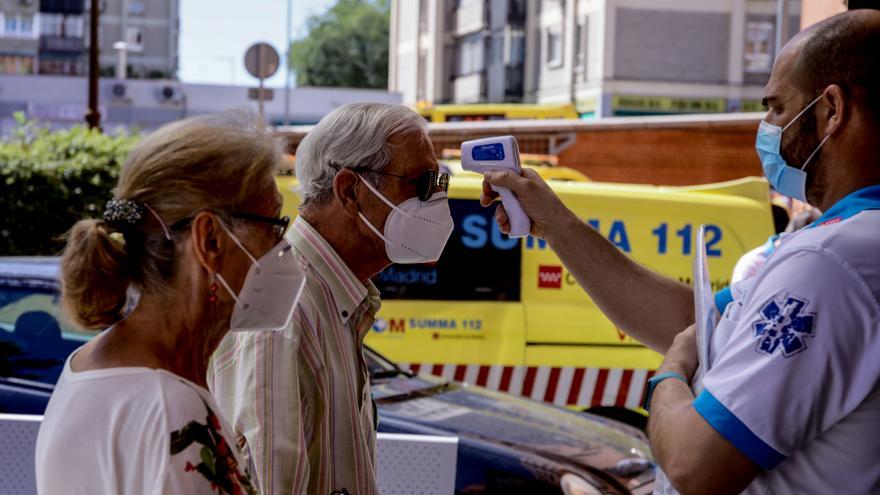 Madrid continues to be the community with the most new cases of coronavirus in Spain. Of the 6,671 infections that Health has added this Wednesday, 2,207 correspond to the region. It is about 30% of the total. Since the start of the pandemic, 370,867 people have been infected with COVID-19 confirmed by tests.

Health has also reflected the diagnoses that have been made in the last 24 hours. At the national level, there have been 3,715. By communities, after Madrid, the second with the most new positives is Catalonia, with 1,016, of which 244 have been detected between yesterday and today; followed by Aragon (632 and 466 on the last day); Andalusia (590 and 261) and Euskadi (475 and 472).

In addition, the health authorities have added 127 deaths to the total balance, raising the figure since March to 28,797, of which 131 have died in the last seven days.

Spain has become the European country where infections are growing the most during the last seven days. The country has registered more than 37,000 new cases in the last week, the eighth in the world. At the same time, it is the European nation with the highest incidence of cases per million inhabitants in the last two weeks: 1,313. Only the territory of the Faroe Islands, with a small population, surpasses it.

This Wednesday, The Government of Castilla-La Mancha has requested judicial permission to decree the confinement of the Albacete town of Villamalea. This municipality, of about 4,000 inhabitants, has, according to updated data, a total of 99 positives from two initial outbreaks, one of them due to a bachelor party and the other in a family sphere that passed into the social sphere. It is the first confined locality in this autonomous community. Most of those infected are young and asymptomatic and there is only one person hospitalized.

In addition, the acting president of the Xunta, Alberto Núñez Feijóo, has announced another screening in the A Coruña area for 60,000 people between 18 and 40 years old. It has also communicated that the region of A Coruña will not have more movement limitations than those that were already in force, despite registering three out of four new infections by coronavirus in the entire community, according to the own data of the Xunta de Galicia. Feijóo said that no transmission of the disease had been detected to neighboring municipalities in that area, so no further measures would be taken for the moment. On the other hand, he has announced that he would propose to the central government that the use of mandatory masks be implemented in schools for children over six years of age.

Gran Canaria pays off a debt with Galdós, on the night of Antonia San Juan