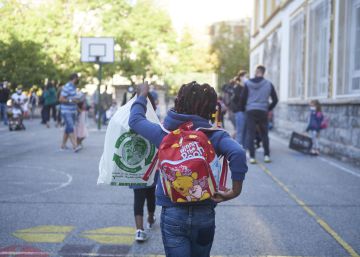 It did not take a pandemic to realize that the educational emergency is a reality. Even before covid-19, some 262 million children and adolescents around the world (one in five) were unable to go to school or receive a full education, due to factors such as poverty, discrimination, armed conflict , displacement, climate change or the lack of infrastructure and teachers, according to UNICEF data. Beyond the confines of the famous PISA report, and in the 21st century, 58% of minors (some 617 million globally) do not reach basic skills in mathematics and reading, which in practice hampers their full development and your ability to contribute meaningfully to the heart of your community.

The celebration of International Education Day, on January 24th, highlights the barriers that continue to exist when it comes to guaranteeing an equitable and quality education for all; priorities listed in the 2030 Agenda and the Sustainable Development Goals (ODS) of the United Nations. This is not a trivial matter: without education, it will not be possible to break the cycles of poverty, gender inequality and social injustice that are still present in many countries, and which also have a special impact on girls and adolescents.

The covid-19 pandemic has evidenced the persistence of a digital divide that left students with fewer economic resources in extreme educational precariousness, but also the need to focus on three fundamental aspects: the obligation to improve the use of the technology in the classroom, the importance of a global competition that helps make sense of this pandemic and its impact on our lives, and the need to re-evaluate the way we live: how we move, eat, consume and even the way we interact with others.

The importance of global competition

Since 2018, the PISA report measures, in addition to performance in Language, Mathematics and Science, global competencies, which measure the abilities to face coexistence conflicts and global issues such as poverty, war, the environmental crisis, hunger or gender inequality, as well as transversal competences as relevant as empathy, communication, solidarity, multiculturalism or critical capacity. An index in which (contrary to what happens with the rest), Spain stands out well above the average.

It is also a matter of social justice: “If there are 7,000 million people in the world, only 2,500 have access to basic services, while two thirds of humanity do not,” says Ana Esevarri, director of the NGO AIPC Pandora, dedicated for 19 years to promoting global education. “But it is also necessary for young people to be aware of and know how to differentiate rights from privileges. We all have the right to water, but drinking clean water is a privilege; We all have rights to transport ourselves, but doing so in a vehicle that pollutes the planet is a privilege; and we all have the right to food, but eating three times a day is a privilege. That our young people grow up knowing that what they consider rights are privileges for the rest of humanity, generates an awareness that will allow us to have a better world ”.

A change of perspective that, for Esevarri, could not be more urgent and necessary. “If we continue living oblivious to this reality, the only thing we are going to achieve is to try to fight against the crises that come our way, as we have been doing for years; that of the coronavirus has been a great manifestation of this, “he says. “The system is poorly made, no matter how much we want to” get confused “in the West. It is not sustained, and that is why it is important that young people have that global vision, so that the borders of their choices are much further away than they are in the environment in which we are educating them ”. Therefore, AIPC Pandora has just launched the Global Youth Academy, a training platform on-line on global challenges and urgent issues such as caring for the oceans, the fight for equity or how to turn cities into better spaces for social coexistence, with the aim that they can improve their environment and lead change.

Of all the rights we take for granted, education is perhaps one of the most important, and this was especially visible during the initial months of the pandemic, which helped to make visible the existence of a digital divide and great inequality in access to economic and technological resources. “We have seen entire schools and neighborhoods where families do not have access to computers, electronic devices or the Internet, because they do not have the means to pay for it; where the young people were left directly without studying throughout the confinement ”, denounces Esevarri. Education through digital media, they affirm from Pandora, “makes adolescents and young people tolerate what is different, grow with exchange and develop attitudes so demanded by companies such as leadership, creativity and empathy.”

In many countries, the education of boys and girls is far from guaranteed. Poverty, armed conflicts or, in the case of girls, social and cultural barriers, often decisively interfere with access to adequate training and their chances of enjoying a dignified and secure future. In this context, the work of organizations such as AIPC Pandora is developed, which has projects deployed in more than 60 countries, to which they send groups of young people “to be integrated into the real work that local NGOs carry out on the ground, giving classes of English, supporting them in workshops, practicing sports together and living with their families ”, Esevarri explains.

Immersion experiences that help make young people (13 to 18 years old) understand what the world around them is like and where the challenges in which they want to collaborate may lie. “We work so that, before the age of 17 (which is when the cortex becomes much less permeable), they have very positive experiences of especially solidarity, social awareness and participation,” he says. “So that the decisions they can make from that moment, at the level of studies, work and participation in society, always take into account this aspect of solidarity.”

One of those projects takes place in Kalassa (Mali), where, with the help of the whole community, a school was built that provides them not only education, but also food that they would not otherwise have. “Realize that, in most developing countries, children go to school not just to study, but to eat. The most successful educational projects are those that feed the children, ”says the director of Pandora. “And they do it, also, twice: at breakfast, so they can be attentive to class, and at lunch, to ensure that they eat at least twice.” Women are the mainstay of the school’s activity, because they not only take care of food, but also set up a sewing workshop so, in addition to making children’s uniforms, they can sell all their crafts and reverse all sales. in the school, to be able to pay the teachers and cover the other expenses of the center.

Despite the obvious benefits of international volunteering, Esevarri admits that not everyone can afford the expenses involved. For this reason, AIPC Pandora also has a scholarship program based on academic excellence for young people from environments of social exclusion in Spain, thanks to the collaboration with organizations such as the Tomillo Foundation, Norte Joven or the Gypsy Secretariat. Environments in which, moreover, the gender issue is always present, where there is a lot of machismo and women are in a much lower condition than men. “We give some of them a scholarship to participate in international projects, while others do so in initiatives such as Opportunity for Talent, which takes them from 4th year of ESO to university, training in global citizenship and English and participating in social entrepreneurship projects. ”. Finally, Pandora also brings young people from other countries to Spain, who face global challenges through the local realities they experience here.

“There are many challenges for the future, starting with getting access to education for all girls”, reflects Marta Pérez Dorao, president of the Inspiring Girls Foundation. According to UNICEF, a girl who completes secondary education is six times less vulnerable to child marriage “and less susceptible to abuse and mistreatment. An economically independent woman implies progress for her family and people, ”adds Pérez Dorao.

Despite all the efforts made to date, gender inequality continues to be a reality in our country, due in large part to the persistence of stereotypes. “There are less than 30% of women enrolled in STEM disciplines, and there is a great need for them in technological and industrial companies,” argues Pérez Dorao. “Girls continue to receive a lot of subliminal information about” men’s jobs “and” women’s jobs “, and that means that even today there are girls who think that they cannot choose what they want to do because it is not girls’.

Obviously, it is not about forcing vocations, nor about making them study something they do not want. The problem occurs when they come to the moment of deciding what they want to do mediated by stereotypes that have been qualifying all their perceptions. “Girls are very unfamiliar with the professions of the future and believe they are less gifted for certain subjects such as mathematics, which has been scientifically proven not to be true,” she says. “Like that girl who, meeting one of our volunteers, exclaimed:“ Hala! I didn’t know that women could be helicopter pilots! ” And another girl thought it was impossible to pass the tests to be a firefighter ”.

Precisely for this reason, the objective of the Inspiring Girls foundation is to help break down these invisible barriers, making female referents visible in all professions: models that exist, “even though they don’t even see them in textbooks, neither in the cinema nor in the media ”. For this reason, they work with educational centers to bring volunteers who, dressed in their work clothes, donate an hour of their time to explain their lives to the girls, if possible in disruptive environments that enlarge as much as possible the impact on girls. The support of sponsoring companies also makes it possible to develop projects such as GreenPower, the design and construction of an electric car that can be undertaken by groups from schools or groups of friends, being able to compete on a racing circuit. In Spain alone, the foundation worked with 800 schools in 2020 and reached a total of 8,370 girls, thanks to a network of 4,800 volunteers.

Breaking down gender barriers also has obvious benefits at all levels. “Studies by prestigious entities such as Catalyst or McKinsey show that companies with mixed management teams earn more money, so that gender equality would mean a substantial increase in world GDP”, says Pérez Dorao. And simply because “anyone should have equal opportunities, know all the professional options and be able to work in what they like, thus developing their full potential.”