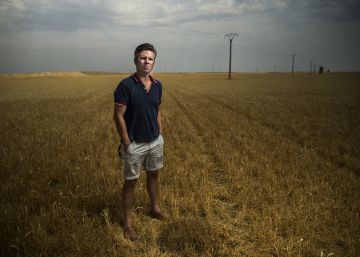 Gregorio Garzón despairs when he sees the fruit of his work in recent months. "This is a land of luxury. In a normal year, you grab an ear of wheat like this and you get about 25 grains. But look. Here there are only five, "he says as he opens the palm of his hand that shows the poor result. The floor is cracked. The spikes should be much higher. And the harvest, more dense. We are at the beginning of July and the season has been spoiled. There is nothing to do. Garzón calculates that his dry land fields will have losses of 60 %% with respect to the previous season's yields. Agricultural organizations and insurance companies reduce their estimates somewhat: the lack of water will take 40% of the cereal season ahead.

We are in Madrigal de las Altas Torres, a town in the north of the province of Ávila whose advertising merchandising stands out that 568 years ago Isabel I de Castilla, better known as the Catholic, was born here. This place is what, perhaps emphatically, the farmers denominate "zone zero" of the drought of this year. The agricultural association Asaja estimates that the lack of rainfall will mean for farmers and ranchers a cost of more than 1,000 million euros, of which about 600 will fall in Castilla y León. Castilla-La Mancha, Aragon, Extremadura and Andalusia are also affected. Part of these losses will be cushioned with the compensation of agricultural insurance, which for cereals will be around 100 million euros.

"The situation for now is alert. If next winter is also dry, we will have a very serious problem, "says Fernando Miranda, general secretary of Agriculture and Food. This senior government official is reluctant to give an estimate of damages. He believes that the drought will leave a "bad" crop, but that it will remain above the "catastrophic" of 2017, compared to an unusually good 2018.

In the fields of Madrigal of the High Towers, many wonder if the lack of water is a passing phenomenon or if they should be preparing for some new -and worse- conditions. "I do not know if it will be climate change or something cyclical, but it is increasingly common. Here it seems that all odd years are bad. Less 2015, which was when I got married, "jokes Garzón. "Although I prefer to think that next year will be good, because five families live on this farm, and here I play it all," adds this 40-year-old farmer.

The scientists seem to confirm the observation of the men and women of the field. According to the forecasts of the Cedex (Center of Studies and Experimentation of Public Works) and of the IPCC (the group of experts that studies the climate change for the UN), the water resources of Spain will be reduced between 24% and 40% until 2100, as this newspaper published in March.

October and November of last year were good. But in December the precipitations began to be scarce. And the next months were worse. Since then, harvest forecasts have only fallen. The most affected on this occasion are rainfed agriculture -which in Spain occupies some six million hectares, an area equivalent to that of Catalonia and Galicia added- and extensive livestock -which is affected by the absence of grass for animals. , which must be replaced by feed, as well as the costs of hauling water. "Although there are limitations in some areas, for now there are no restrictions of a general nature. That's why irrigated agriculture has not suffered so much, "explains the Secretary General of the Ministry of Agriculture.

For now, only the field is thirsty. The reservoirs are at a good level and there is no danger for consumption. But everything will depend on the water that falls from the sky in the coming months. As always, farmers and ranchers function like the canary of the mine to detect climatological swings.

The government met the affected sectors on Thursday. Both of them left the meeting with conflicting views of what happened there. "There were very good words, but no concrete action. The availability of the Government to the dialogue is total … as long as it does not cost money ", criticized just after leaving the meeting Donaciano Dujo, president of Asaja Castilla y León. This agrarian leader demands direct aid, low interest loans and tax improvements for those affected.
Miranda replies that for now, before assessing the seriousness of the situation, the Government can not do much more than request the European Commission to advance by October the payment of most of the direct subsidies of the Common Agricultural Policy, which in together they add 5,000 million euros.

In Maello, 60 kilometers south of the province of Ávila, the concern is also maximum. Carmelo Jiménez has spent his whole life among these pastures. On the other side of the slope, he grazes a thousand sheep from his property. His partner Victoriano Garcimartín, 70, remembers the time when they could not see the ground for more than a month because the snow covered everything. Now it's weird the snowing year. "This life is very slave, but if you compare it with the one of years ago, it is much more bearable," he says. Jimenez looks at his sheep. "On these slopes we have thrown our lives. With the cattle. On these slopes, "he says softly, as if talking to himself.

Of the six million hectares dedicated to cereal in Spain, the drought affects one million, an extension similar to that of Navarre. The problem of lower yield joins that fewer farmers have subscribed insurances due to higher premiums after the drought of 2017.

The Secretary General of Agriculture and Food, Fernando Miranda, estimates that a third of the area planted with cereals will be insured. "The Ministry is going to try to make the examination as quick as possible so that the payments, of around 100 million, will begin to be made in July. But as we are chaining processes of drought, the coverages are going down. And administrations can never give aid for something that could have been insured, "he concludes.