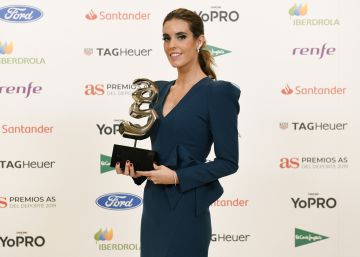 The AS Awards, which recognize sports excellence, have chosen The league, with mentions of Real Madrid and Messi, the Spanish women's and men's basketball teams and Ona Carbonell among the winners of its thirteenth edition. The delivery ceremony was held Tuesday at the NH Collection Madrid Eurobuilding Hotel, where a tribute was paid to the late skier Blanca Fernández Ochoa.

"If this year's AS Awards show anything, it is that the sport is above colors, races, flags, genders and borders," the host Dani Garrido summed up at the opening of the gala. The journalist gave way to the director of AS, Vicente Jiménez, who stressed that "the king sport is sport", which helps improve society and, in this regard, praised the "sacrifice, determination and suffering" of all rewarded

The first was the footballer Diego Forlán. The Uruguayan has moved away from the playing fields with 40 years after having played for teams in Argentina, Spain, Italy, Uruguay and England. His career has earned him the AS América award, which Alejandro Martínez Peón, president of AS, presented him. This award was also received by the Colombian cyclist Egan Bernal, the first Latin American to achieve a Tour de France, who did not put to attend the event, but sent a video in which he thanked the recognition, highlighting "the trajectory" of Diario AS.

The sports newspaper, which has a presence in 25 Arabic-speaking countries, has also highlighted the high jumper Mutaz Essa Barshimwith AS Arabia. The Qatari, 28, is world champion, although he has not been able to exceed 2.45 meters, the Cuban record Javier Sotomayor, Legend Award of this edition. The exalter retired in 2001, but remains the Prince of heights, although he acknowledged that Barshim has made him "tremble" on more than one occasion.

After the prize of Barshim he paid tribute to the skier Blanca Fernández Ochoa, who died in Madrid's mountain last August. "With it we vibrate, we grew up and today, wherever it is, we want to thank you for the emotions that made us live," the presenter emphasized. His sister Lola received recognition from the entire AS team and the world of sports from José Rienda, president of the Higher Sports Council. "Our family has quintupled because we have received messages of support from all over Spain and elsewhere," said Lola, who could not hold back the tears.

The distinctions continued and it was the turn of the Fair Play Award, which went to José Lucas Mena, coach of the Aspil-Vidal Ribera Navarra futsal team. At the beginning of the year one of his players scored 4-1 against Industrias Santa Coloma while the rival goalkeeper remained on the ground. Mena ordered his players to be marked immediately, giving a lesson in fair play.

And from one example to another, swimmer Núria Marqués was chosen as the best Paralympic athlete. Next year he will compete in the Tokyo Games, with the memory of his two medals in Rio. Another swimmer, Alba Vázquez, won the AS Promesa Award. At 17, he already admits comparisons with Mireia Belmonte after becoming a junior world champion.

The Trajectory Prize went to the best Spanish skater in history, Javier Fernández. The double world champion and Olympic medalist has retired this year, having put his country on the map of this discipline. Also apart from the competition, although temporarily, the swimmer Ona Carbonell, prize AS of Sport and world women's medal record with 23. The aquatic queen thanked the newspaper for accompanying the athletes in the victories and defeats, "making the road visible and giving voice to the values ​​of the sport."

The night was full of other great athletes. The former basketball player Jorge Garbajosa collected the AS prize of the Spanish Basketball Sport as president of the federation, and gave it to “all who work in basketball”, from small schools to the ACB. The trial driver Toni Bou, who holds 26 world championships, was also awarded.

LaLiga celebrated its 90th anniversary with an AS Sports Award. Within this award, Real Madrid stood out as the most successful club; Messi, as top scorer in history; Joaquin, as an active player with more games, and Luis Aragonés – his sons Luis and Moqui went -, as the man with the most seasons in LaLiga, adding his matches as a player and coach. Among those who presented the awards was the CEO of PRISA, Manuel Mirat.

As an entity, the Davis Cup was also awarded in this category. The president of the Spanish Tennis Federation, Miguel Díaz, received the trophy, which was given to him by the Minister of Culture and Sports, José Guirao.

LaLiga, on its 90th anniversary.

Real Madrid, the most successful club in the League (33 titles).

Joaquin, active footballer with more games in the League (530).

Luis Aragonés, more presences in the league as a player (15 years old) and coach (25).

José Lucas Mena, coach of Ribera Navarra futsal. He ordered his team to be marked after scoring while the rival goalkeeper was injured.

Núria Marqués, swimmer with a Paralympic gold and silver and 12 world medals.