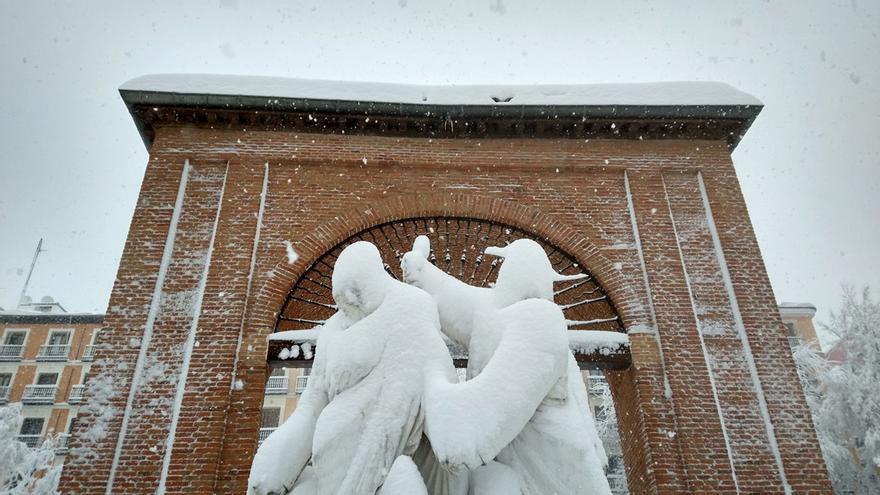 “It is as if nature is wanting to tell us something.” It was Friday night and the snowfall sent by Filomena to Madrid had already set. I was leaning out on the balcony to attend the novel show: the meeting of Conde Duque with Amaniel and Santa Cruz de Marcenado covered in white and with no traffic in sight. The people, the few who dared at that moment, went out into the street hallucinated, with their mouths open and their gaze towards the sky despite the downward trajectory of flakes. The silence was also rare and that is why I could hear what a girl said to her adventure companion while they walked as did those who first stepped on the Moon. Indeed, nature, embodied by Filomena, has told us many things.

On Saturday he told us that there are other ways to take the city, much less seriously than normally, as a place for play and enjoyment, as a ski slope, as an amusement park, as a territory where you can make use of a public space normally prohibited for the passerby and in a way that illustrates the improvement of the design of pedestrian routes and traffic in general. On Saturday we gave ourselves for throwing snowballs as if there were no tomorrow and, above all, because there was a yesterday full of pain due to the ongoing pandemic.

On Sunday he told us something else. On Sunday he began to teach us that the storm was not a joke and he also showed us that, in general, we have lost connection with the city and our knowledge of its mechanisms. With Madrid frozen in every way, most of us continued uploading moments of joy to our Instagram and doing what we would do on a normal day: lowering the cartons to the container, having a drink on a terrace, ordering anything on Amazon, starting to complain about what we think happens exclusively to each of us without doing much to change what happens to all of us. Not all people, of course. There were numerous exceptions that, however numerous they were and always are, remain exceptions, perhaps more and more. In Malasaña there were those who acted on their own, groups of neighbors who also organized in their own way and the usual support networks that put different groups to work in a more coordinated way. Thanks to them, the rest of us were able to live this life outside the ordinary without breaking our minds. The same happened in other neighborhoods.

And every day, before, during and after Filomena, they have told us more. And it is that we are left of the hand of God. There is no one with criteria in command in the local, regional, or state administration. They all dedicate themselves very well to the management of their social networks and are completely unaware of what the public management is about. Some, in addition to not knowing it, want that management to end. Since the Aemet warned of what was coming until the heat melts the last flake and then, all performances they deserve to be in the universal encyclopedia of unconsciousness, ineptitude and idiocy. In fact, I correct, even the management of the social networks of the politicians in charge and their surroundings has been idiotic. I am not going to list one of the possible examples because we have enough to live them; I am only going to point out a paradox, which is not so much, and a danger. The paradox is that it is precisely the active and organized neighbors who, being systematically despised and attacked by their rulers – in Malasaña, for example, with the Casa del Cura and the Solar de Grilo as samples – have taken charge of the work they have not done. those who rule. The danger is that, with a system that In this year of continuous crisis, it has proven not to function when it is most needed., the rulers push to make it completely useless, causing a disaffection and a trip to individualism that only feeds the monster that we have less and less hidden in the closet, as he says. this text by Esteban Hernández.

There is more. And it is, indeed, what that girl said on Friday in front of my balcony and what the anthropologist says Jordi Serrallonga in this interview: we have no idea how life works, we believe that we are the center of the world, that we are superior and that we control nature but in reality it is she who rules. We can become extinct at any moment, under a blanket of snow or a pile of sand, and no one will remember us and our ignorance. Which, in a way, is a relief.

Telefónica reduces the dividend by 25%, to 0.30 euros per share | Companies