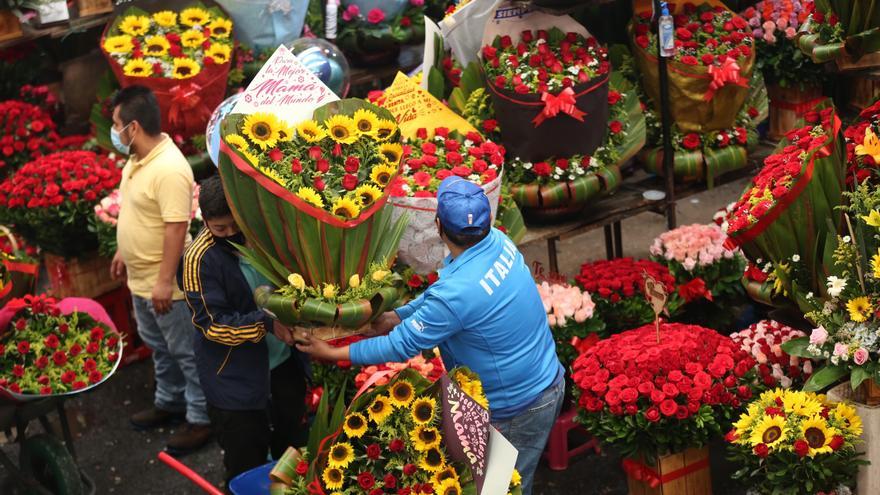 Mexico City, May 9 (EFE) .- The advance in vaccination in older adults and the decrease in infections inject recovery to the sacred Mother’s Day in Mexico, where merchants hope to recover 70% of the level of sales they had before of the pandemic.

Hope is illustrated by the Jamaica Market, the best-known flower sales site in the country’s capital, which closed at this time a year ago due to an outbreak of covid-19 that classified it as a “high contagion area” and now seek normality.

“We must remember that last year the market was closed due to the pandemic, so we invite you all to come now, to help us reactivate the economy, by coming to buy,” Abigail Gutiérrez, who has been 20 years helps his family in the flower stand.

BETWEEN CONTAGES AND LOW SALES

Mexico is the fourth country with the most deaths from covid-19 with almost 220,000 deaths and more than 2.36 million infections, but the authorities affirm that there are 15 consecutive weeks of reduction after the maximum peak in January.

A year ago, at the beginning of the first peak, businesses stopped receiving 36,000 million pesos (1,800 million dollars) for Mother’s Day, 80% of the previous year’s sales, according to the Confederation of National Chambers of Commerce, Services and Tourism (Concanaco Servytur).

In addition, May 10 will coincide with the start of the new yellow color, with a medium risk level, of the epidemic risk traffic light in Mexico City, which will allow more capacity in shops and restaurants.

Even so, vendors like Mónica Juárez still perceive that “normalization” is going “quiet.”

“Very weak, there are almost no sales, the flowers dry and are thrown away, if sales are low,” he laments.

The Mexican Flower Council (Conmexflor) reports a 50% drop in total sales in 2020, of which 10% correspond to Mother’s Day.

Although this May 10 it expects to recover its normal levels of 2,000 million pesos (100 million dollars), merchants such as Ulises Bernardino express caution because “people are entering the market”, but the volume of visitors is still lower compared to other years.

“The entire corridor was full, you couldn’t even go by and now let’s see how it gets on, how it goes,” he says.

In Mexico, Mother’s Day has been celebrated on May 10 since 1922 due to the institutionalization of the then Secretary of Public Education, José Vasconcelos.

Since then, this date is almost religious in Mexico, a country with more than 35 million mothers, according to the National Institute of Geography and Statistics (Inegi).

In fact, specialists attribute part of the first peak of covid-19 infections, which reached its maximum in July 2020, to the celebrations of May 10, so some people, such as Mercedes Vázquez, will use the date to “thank that are alive ”.

“On the one hand we are happy because we live, we are still healthy, those of us who are here, those who are gone, who lose their relatives, it is unfortunate, there is no celebration,” says Mercedes, who dared to go to the market before the loss of cases.

Other people, like Petra Cruz, say that now “hope is the vaccine.”

The Government of Mexico boasts of having met the goal of vaccinating more than 11 million adults over 60 years of age with at least one dose, as is the case of Petra, in addition to starting this month with the immunization of almost 10 million people from 50 to 59 years old.

For this reason, Petra, who lost five relatives due to covid-19, now feels confident to go and bring her mother flowers to the pantheon, which closed last year due to the health emergency.

“When it is Mother’s Day I go to see my mother who right now rests in peace, I bring her flowers, I bring her her candle and my heart is happy even though we no longer see her physically, I carry her here in my heart “, He says.