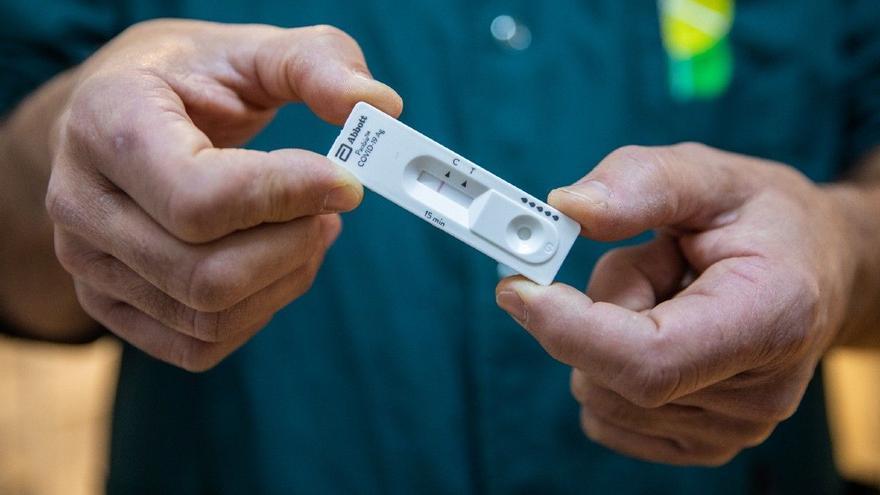 Omicron has triggered the cases of covid-19. Faced with the avalanche of infections, there are many who, unable to find an appointment in the already saturated outpatient clinics, resort to antigen test to find out if they have been infected. In the last month, in full festivities of Christmas, the demand for these diagnostic tests in Spain has multiplied exponentially and, thus, they have too your prices for sale to the public. Users denounce that the same diagnostic kits that a few months ago could be purchased for just over three euros now, if they are found, they exceed 10 euros. Experts and consumer organizations, for their part, warn that it is "speculating with health of people with covid-19 "and demand a regulation of the prices of these now essential products.

At the height of the demand for antigen tests, the General Council of Nursing (CGE) has asked the government that limits the sale price of antigen tests, "as was done with the masks", to avoid" speculation with people's health "." That there are differences of more than 10 euros between some establishments and others causes a huge injustice for the whole of society ", affirms the collegiate organization. Jaume Padrós, president of the Council of the College of Physicians of Catalonia, has also spoken in favor of set a price limit so that the sale of these diagnostic tests is "affordable".

According to a recent analysis by the consumer association Facua, the sale of these diagnostic tests has gone through several stages of shortages and price inflation. The cost of the tests, the entity denounces, varies up to 102% depending on the pharmacy and in many cases exceeds ten euros per unit. At this time, then, "a family of four has to invest up to 40 euros each time they have to take these tests." Especially now that, according to the experts, the infections are rampant.

In Spain, the price of self-tests is not regulated (and neither is the price of PCR and other diagnostic tests on coronavirus performed in the laboratory). The Ministry of Health left this question in the hands of the autonomies, which are the ones who have the last word in health matters. In Catalonia, several political parties have spoken out in favor of opening the debate on this regulation of prices. In Valencia, Galicia and the Balearic Islands, favorable voices have also emerged to agree on a maximum ceiling for the sale of these sanitary products. "The prices of antigen tests cannot fluctuate as if it were the stock market", declared a few days ago Joan Baldoví, spokesperson for Compromís in Congress.

In countries like the UK, antigen tests can be obtained free of charge. In France and Germany, the sale price of these products is limited to a maximum of three euros. In U.S, the cost of these kits is not regulated but, even so, Biden He promised that the country would distribute up to 500 million free tests to its citizens. This is how the correspondents of El Periódico explain the situation of antigen tests in the world.

In Germany, any citizenRegardless of whether you are vaccinated or not, you can access the so-called Bürgertest (citizen tests) in the thousands of test centers that are scattered around the country. Every citizen has the right to a free weekly antigen test. The authorities decided last November to regain universal access to this service given the increase in cases in the fourth wave of infections that began in autumn. The current legislation also obliges companies to offer at least two weekly antigen tests to employees who have to go to work.

Thus, German citizens have less need to resort to the private offer of tests than in other European countries. If necessary, the current prices in the main supermarket chains and hygiene products stores are as follows: the price of a self-test of antigens fluctuates between 1.75 and 3.75 euros.

The Portuguese government approved in April of last year a 15% cap on profit margin -both for wholesalers and retailers- of products such as self-tests, disinfectant gel and masks. A measure that has allowed the price of self-tests between 2 and 4 euros per unit. These products also have a reduced rate of 6% in the VAT.

The Executive also approved in mid-November the realization of up to four free antigen tests for all users of the National Health Service (SNS), available in pharmacies and affiliated laboratories. This number was expanded to six tests per person in mid-December to encourage the population to take the test before the Christmas holidays.

For some months now, Italy has a maximum price, set by the Government, for antigen tests intended for 15 euros adults and to adolescents between 18 and 12 years old, 8 euros. The tests that are dispensed in pharmacies and that can be done at home have prices that vary, in most cases, between 5 and 8 euros.

The last measure that has entered into force in Italy has been the price limitation of FFP2 masks, which now cannot cost more than 75 cents in the country. The decision was adopted last week, following the rise in the Italian epidemiological curve, thanks to an agreement with pharmacies, and to make this sanitary device more accessible, which is now mandatory for Sars-Cov-2 positive people who do not have symptoms and can avoid the quarantines. In addition, this mask is also required to use public transport and some leisure activities, such as going to a cinema or a theater.

At United Kingdom, the government hopes to overcome the current wave of omicron with two weapons: vaccination Massive booster dose and rapid tests available and free for everyone. Citizens can get rapid tests at many pharmacies. The prerequisite is to register on the government's internet portal where you get a code, similar to the one found in restaurant menus, with which you can collect the tests. Each pack contains seven of these tests. It is also possible to obtain them in some community centers such as libraries, or in universities, such as Westminster in London. Nursery school managers and teachers at all levels can take the test through their respective centers.

Starting next Monday, January 10, 100,000 workers in essential services in England will be subjected to a daily rapid test. After each test, whether done at home or at work, it is necessary to report the result, whatever it may be, as quickly as possible and no later than 24 hours after it is performed. Travelers and those who are passing through, have the option of taking the test in many authorized places. The price ranges between 30 and 40 pounds (between 36 and 47 euros) and includes the travel certificate required in some countries.