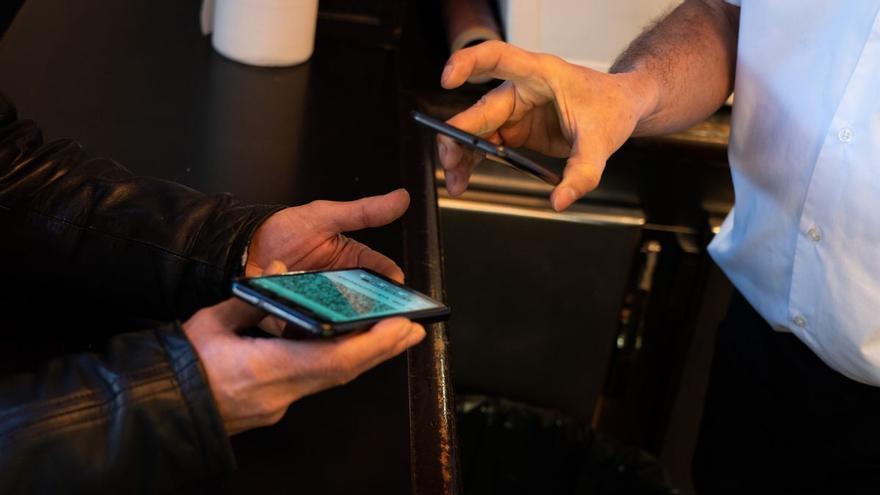 The COVID passport, the most popular measure to contain the sixth wave in Spain, is beginning to run out of steam. The Government of Cantabria has announced that will not extend the requirement to show a vaccination certificate to enter the hospitality industry because it "no longer meets the goal" of reducing transmission of the virus and everything indicates that Catalonia, which has just confirmed the end of the curfew, will follow the same path. The Technical Committee values ​​its usefulness these days, although the General Director of Public Health of the Government, Carmen Cabezas, has advanced that it makes little sense with omicron.

Both administrations link the decision with the emergence of the new variant that spreads more easily and better evades the vaccine. Its dominant status in Spain has once again reactivated the dormant debate on whether it is really useful, even among technicians from convinced communities, such as Catalonia. There are many doubts about the effect that the COVID passport – whose implementation was not easy due to the reservations of the courts – has had on the course of the pandemic in the last month, although many communities are extending its use until at least January 31 alluding to its indirect impact as a stimulus for vaccination.

Only four territories in Spain refrained from using it (Extremadura, Madrid, Castilla y León and Castilla-La Mancha) and the evolution of their cumulative incidence curves is no sharper than those of the communities that adopted the tool. In fact, all the regional governments in the north of Spain, where the sixth wave has had the greatest impact, opted for the measure.

"It is difficult to assess what its impact has been, taking into account that the wave has been super explosive, but it seems that the pattern of expansion has been the same as other times, with some communities very affected first in the north and then in the center," maintains the epidemiologist Pedro Gullón, who considers that from the beginning "it made little sense to cut off transmission." "Now, with the high circulation and the ability to generate mild infections that Omicron has on vaccinated people, even less," he concludes.

"At the level of incidence, it has not had much effect because it could not have. It can reduce transmission a little but the fact of being vaccinated does not mean that you cannot be a case or a carrier," points out, for her part, the researcher from the Institute of Global Health of Barcelona, ​​Anna Llupià.

The truth is that the tool never had good technical acceptance in Spain. The Report on Alerts and Preparedness and Response Plans, a body dependent on the Ministry of Health and made up of technicians and experts from the autonomous communities, disassembled its usefulness in a report at the end of November. It argued that there was no evidence of its ability to reduce transmission and that it could create a sense of "false security" and lead to relaxation of indoor prevention measures.

Antoni Trilla, head of the Preventive Medicine service at the Hospital Clínic de Barcelona, ​​is part of the Technical Committee that advises the Government and recommended implementing the passport. "At the time it was used for the first time, it was a situation in which, compared to delta, the vaccines protected more from contagion. The omicron variant introduces the variable of infecting us if we are vaccinated, but we must bear in mind that a well-vaccinated person is contagious and it is less contagious", considers Trilla, who, despite being convinced that "it has been and is useful", admits that its effectiveness in controlling transmission is not easy to measure.

The discussion in the case of Catalonia now revolves around "the risk-benefit balance" of the measure. "If it is worth mounting the controls", that are beginning to decline in communities such as Euskadi, for the result you can have with a much more contagious variant. Trilla, in a conversation with elDiario.es, advances that the experts' position is more aimed at "removing it than reinforcing it, although not probably in all cases." "You have to remember that it is an accepted measure for traveling in many countries and I think it could be useful to keep it in nightlife, for example, where there is more risk," he adds.

The measure was embraced by the regional governments a month and a half ago as a way to avoid more severe restrictions, such as limiting capacity and hotel hours. On several occasions he ran into the brakes of the courts and the limits of computer systems, saturated with downloads. The judges marked that it should be delimited in space and time in order to restrict fundamental rights. The Ministry of Health was initially reluctant with the measure and refused to provide a national umbrella to the autonomous communities to pave the way with justice, but finally accepted that it was "an open path".

The COVID passport has generated divided opinions about its effectiveness. But there is more consensus about the function of the tool as an incentive for vaccination. The increases in first doses can be seen in the graph above: they are more pronounced in Cantabria, Euskadi, Navarra or Catalonia.

"It is possible that it has circumstantially encouraged people to be vaccinated" who had not done so until now and who for the first time saw some of their rights limited by this fact, points out the researcher at the Barcelona Institute for Global Health (ISGlobal). .

Along the same lines, the director of Public Health of the Govern, Carmen Cabezas, assures that "it served to increase the percentage of young people with first doses" – the growth reached 64% during the first days – and to "raise awareness about the discrepancy between what happens in health centers and in bars". It has not had a clear assessment, however, about its impact on the transmission of the virus. Gullón limits this effect only to the first days after its start, not in the long term.

The implementation window, at least in Cantabria and Catalonia, has been short. We will have to wait a few weeks to confirm in Spain if it is a temporary tool pushed by the latest rise in infections or it is a measure that has come to take root, as is happening in European countries such as France, in force since the summer and stricter since this week.

Why is there such a difference? The experts consulted link it to the high level of vaccination in our country and the lower adherence to the vaccine in neighboring countries, where there is greater margin for this effect to bear fruit. In France, Germany and Italy the vaccination rate grew by 13%, 6.2% and 9.7% after the implementation of the COVID passport, respectively, According to a study by Bruegel researchers, a thinktank based in Brussels.

The research opens the analysis on the effectiveness to the economic sphere and concludes that, if this health measure had not been taken, the GDP of the three countries would have been lower at the end of the year. 0.6% in the case of France, 0.5% in Italy and 0.3% in Germany.