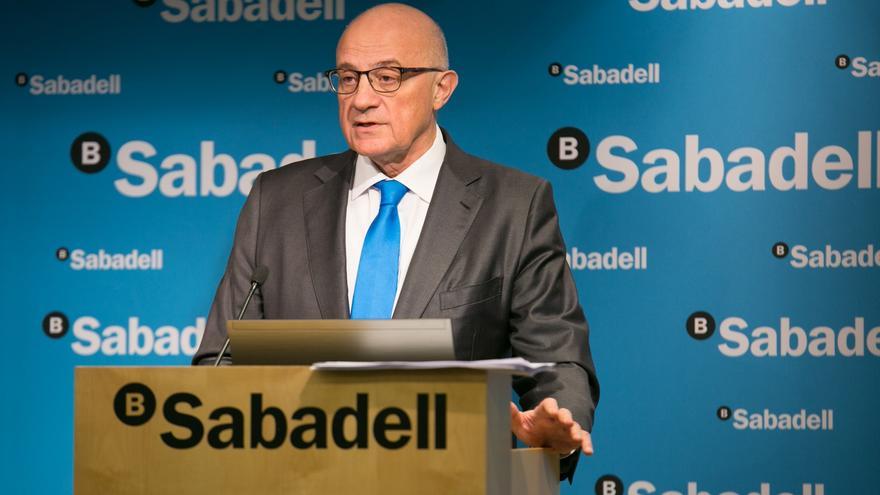 Banco Sabadell faces 2021 with a major change in its organizational structure after the failed merger with BBVA. As the main change, César González-Bueno will be the new CEO of the bank, replacing Jaime Guardiola. But it will not be the only change. The historic president Josep Oliu, 71, will continue in the position but will lose executive functions, as he himself explained in the presentation of the entity's results for the past year.

These changes take place months after the entity ended the conversations with BBVA to merge, although the entity does not link the organizational restructuring to this fact. As Oliu explained, the loss of his executive powers is due to a "joint decision" with the board of directors, considering that it is the model recommended by the European Banking Authority. "I proposed to the bank that it be carried out as a result of the new CEO and because the relative ages of the people are what they are," he stressed. Asked if he will retire next year, when his term expires, he has pointed out that he has not made a decision. For his part, Guardiola has assured that the decision to leave his position was already on the table and has been delayed "due to circumstances." "It was my turn, there are 42 years of experience in this sector," he said.

González-Bueno will arrive on the board of Sabadell with greater executive powers than his predecessor and will have, as the first task on the table, the formalization of a strategic plan for the company. It will do so with a new financial manager, since the bank has announced that it is going to hire Leopoldo Alvear, who to date was responsible for Bankia's finances and the merger with CaixaBank meant his departure. Oliu has assured that the objective of this strategic plan will be to keep the bank with its solo activity.

The Catalan bank has closed the year 2020 on the verge of losses, since the profit has been just two million euros, which means cutting the accounts by 99.7%. The impact of the British subsidiary and the provisions of more than 1,200 million euros due to the pandemic are reasons given by the entity for this result. The bank closed the door to give a dividend this year, as Bankinter, CaixaBank or BBVA have announced.

Oliu has closed the option to resume contact with BBVA after the merger failed due to the lack of agreement on the valuation of Sabadell. "The issue of BBVA belongs to the past. The bank is not looking for any corporate operation but to analyze the profitability of the businesses," the executive stressed. The bank will focus on analyzing whether all its businesses are profitable and opens the door to dispose of those that do not represent a profitable business. In this chapter, the sale of TSB, its British subsidiary, whose process was announced before the end of the year, has cooled. "A sales process has not started," Oliu said. It has indicated that it is a "flexible" question and that there is no "decision taken".

Regarding the trends that affect the sector, Guardiola pointed out that the bank does not charge for deposits more than companies and institutions, but "the door cannot be closed with the trend in interest rates." BBVA was the first bank to announce this move, while its rivals such as CaixaBank or Bankinter have categorically closed the door to this possibility. With regard to delinquency, one of the fears in the sector due to the pandemic, they point from the bank that it is expected to grow throughout the year but would not be much above the current delinquency rate.