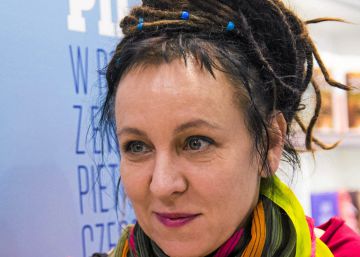 Writing novels, says Olga Tokarczuk, is like telling stories to yourself as children do before bedtime, using the language that lies at the border between sleep and consciousness, describing and creating. The, for a few hours, last year's Nobel Prize – the anomaly caused by the scandal of abuses at the Swedish Academy is making the prominence of this year's delivery double-headed -, he must have called the jury's attention precisely by being granted last year the prestigious Man Booker International for the English translation of his 2007 novel, Bieguni (Flights), which will shortly be published in Spanish by Anagrama. At 57, the author of little Sulechów – the 18th woman who receives this award, and the second Polish – has a large and polymorphic work behind her.

He flirted with the fantastic, or something similar, in his second novel, E. E. (1995), the story of a girl with psychic powers who suddenly loses them. It is not in vain that she considers herself a lover of the genre and admits that Edgar Allan Poe is partly to blame that she ended up being a writer. He, and the claustrophobic Nikolai Gogol, although whenever he quotes referents he does not forget to mention the master of the story Anton Chekhov and the brilliantly expanded narrative Thomas Mann. As a graduate in psychology, the first lifeboat she climbed, as a future creator but also, professional, was the one who provided his admired Carl Gustav Jung, the famous Swiss psychiatrist, is a key figure in the initial stage of psychoanalysis.

He worked, Tokarczuk, in a psychiatric (Walbrzych). When he returned home at night, or in the shift, he wrote. His first novel was published in 1993 – it was titled The Journey of the Men of the Book –And she was blessed by the Polish Association of Book Publishers, which awarded her her prize that year. At that time, the writer, who had sold her first stories to the magazine Na przełaj – in which he published with a pseudonym -, he still worked in the mental institution as a psychotherapist, and it was not until his first novels began to work (A place called yesteryear, published in 1996, was the first to emerge) that left work and settled in Nowa Ruda, where it has not moved since. He has also published two collections of stories – the first of them, in 1998, the year he published the second of his novels nominated for the famous Nike, Day house, night house – and an essay on the novel The dollfrom Bolesław Prus.

In the early 2000s it seemed to be devoted to historical and mythological reconstruction. 2004 is his novel Ostatnie Historie (Latest stories) in which the story of Poland and Ukraine is told through three women from the same family – grandmother, mother and daughter -, and 2006 Anna Inn in the graves of the world, a story that tracked Sumerian mythology. And then it would come Flights, the novel that made her last year the first Polish to win the Man Booker International, and that she describes as "a constellation book, because it consists of many small fragments that the reader has to collect." The writer, who, despite her narrative career, began publishing a book of poems (edited in 1989, her zero year as a published writer), also co-directs a literary festival, and is a best seller in her country. His latest work published in Spanish, On the bones of the dead (Siruela), is a curious black novel metaphysical and environmentalist starring a road engineer.