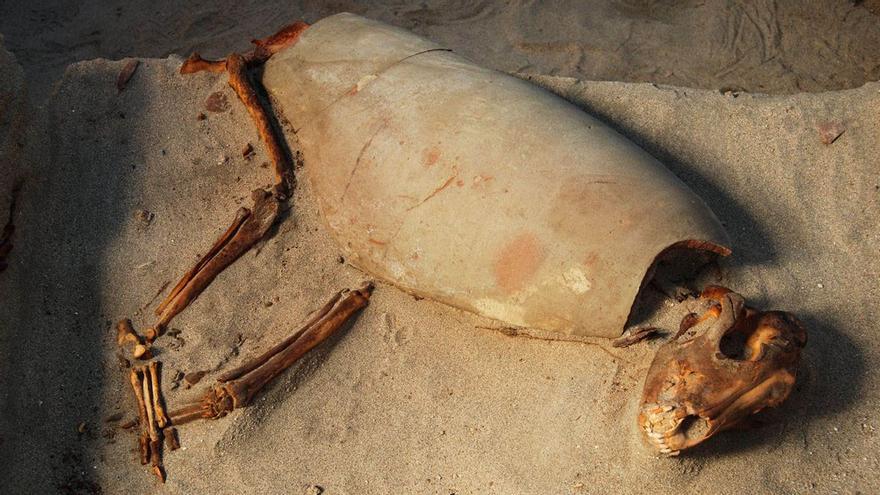 Archaeologists have discovered in Egypt the oldest pet cemetery, almost 2,000 years old, full of remains of cats and monkeys that wear necklaces with shell beads, glass and stone.

The ancient Egyptians are known for mummify countless animals to honor the godsBut this cemetery is different, said study lead researcher Marta Osypinska, a zooarchaeologist at the Polish Academy of Sciences in Warsaw. Unlike some mummified animals that were buried elsewhere, sometimes from starvation or a broken neck, none of the creatures in this cemetery, located just outside the port of Berenice on the Red Sea, showed signs of having died at the hands. of people.

However, "we have old, sick and deformed animals that had to be fed and cared for by someone"Osypinska told Live Science in an email." We have animals (almost all of them) that are buried very carefully. The animals are placed in a sleeping position, sometimes wrapped in a blanket, sometimes covered with dishes. "

In a case, a macaque monkey was buried with three kittens, a grass basket, cloth, pot fragments (one of which covered a piglet) and "two very beautiful shells from the Indian Ocean stacked against its head," Osypinska said. "So, we thought that in Berenice the animals were not sacrifices to the gods, but only pets."

Archaeologists discovered the pet cemetery, which dates from the 1st and 2nd centuries AD during Egypt's early Roman period, accidentally. For years, researchers have excavated the outskirts of Berenice because it houses an old landfill. In 2011, archaeologists began to find small animal remains in one area, so they toured Osypinska due to its specialty in zooarchaeology.

"It turned out to be dozens of cat skeletons," he said. In fact, of the 585 animals they excavated, 536 were cats, 32 dogs, 15 monkeys, a fox and a hawk.. None of the animals were mummified, but some were placed in makeshift coffins. For example, a large dog "was wrapped in a palm leaf mat and someone had carefully placed two halves of a large pot (amphora) on its body," like a sarcophagus, Osypinska said.

Like some pets today, these animals may have worked for their owners, Osypinska said. For example, cats may have been mousers and dogs could have helped protect and hunt. But some of the animals were deformed, which means they probably couldn't run.

"Someone fed and kept such a 'useless' cat," Osypinska said. His team also found dogs, some nearly toothless, that reached old age, and three "toy dogs", smaller than cats, that were probably too small to work.

Other clues indicated that these animals were pets, including the fact that many of the cats wore iron or beaded collars, "sometimes very precious and exclusive," said Osypinska. An ostracon, a piece of pottery with text, such as an "old text message", found on the site, had a note from when some domestic cats were still alive, telling the owner not to worry about cats , because someone else was taking care of them, he added.

Many scholars argue that the ancient world did not have the concept of "pets", but "our discovery shows that humans have a deep need for the companionship of animals"Osypinska said. Some 2,000 years ago, "the port of Berenice was at the end of the world. It was an empty and hostile piece of the world," he said. "Traders came here to bring exclusive goods to the empire. What they took on such a long and difficult journey: a beloved dog, or they had a monkey brought from India, or they had cats."

The study appears in the January 25 online edition of the journal World Archeology.