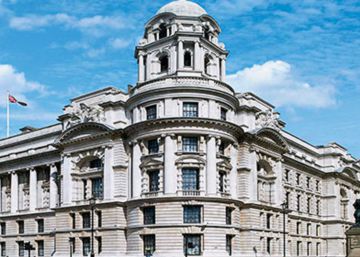 OHL finalizes an agreement to sell to its Indian partner Hinduja the 49% stake it has in the Old War Office in London, a nineteenth-century building in the center of the British capital that once housed the Ministry of War, and that goes to be destined to the construction of a hotel and luxury homes, as announced on Thursday by the construction group.

The amount of the operation has not been made public but it is estimated that Hinduja, which already has 51% of the project, will pay just over 100 million euros, to build an exclusive hotel operated by the Raffles chain. The Villar Mir family group has made a provision of 47.6 million euros in its downward valuation of the building, which it acquired in 2014, to cover the eventual effect of Brexit.

The transaction, pending compliance with certain conditions, will be formalized “as soon as possible”, as detailed by the CEO of OHL, José Antonio Fernández Gallar.

The first executive of OHL, despite considering that it is an “excellent project”, also blamed its sale at the low maturity that it presents, its demand for resources, and the fact that it is not responsible for its construction and that United Kingdom is not a strategic market.

The group will, however, keep ownership of the Canalejas Project that it develops in the center of Madrid, in 50% alliance with Israeli businessman Mark Scheinberg, founder of the poker firm on-line Poker Stars In this case, OHL has opened negotiations with banks and funds to obtain liquidity by guaranteeing the 50% participation in the project, a percentage that is valued in books at around 200 million euros.

As the company advanced, the hotel of the Canalejas complex, the first of the Four Season of the country, which already accepts reservations, will open its doors in May and, a few months later, the commercial gallery and homes. These assets have been built in seven historic buildings that make up a whole block of the center of Madrid, next to the Puerta del Sol, which Villar Mir bought from Santander in December 2012.

OHL announced these operations coinciding with the presentation of the results of 2019, a year in which it reduced losses to 127.8 million euros, 92% less than in the previous year. However, the company that currently negotiates the entry of the Mexican family Amodio in its capital, achieved its first positive operating profit (Ebitda) in four years, of 64.8 million, which also exceeds the initial forecasts.

The cost reduction program contributed to this, which has been cut almost in half in two years, the greater cash generation and the lower outflow of resources for projects due to failed international works.

The turnover increased 1.8% last year, to 2,959 million, of which 72% came from abroad, primarily the United States and Latin America. OHL considers that 2019 was a year of “transition” and hopes that 2020 will be a “consolidation exercise” with the aspiration to return to benefits in 2021. At the moment, in this year it aims to achieve the level of 3,000 million revenue and 70 million Ebitda.