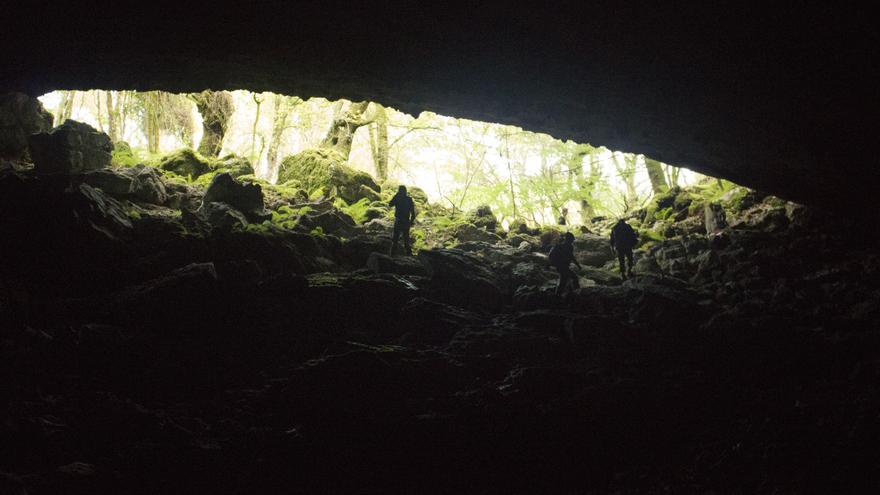 1st century before our era. The indigenous peoples of the Cantabria region are under siege by the Roman army. These are difficult times, of formidable instability. The natives know that the infinite power of Rome it will end up taking everything away. Wherever you look, the dilemma is terrifying: they will end up dead or taken as slaves. Unable to fight the enemy only with physical means… it only remains to pray. In the deepest cavity of a remote Cantabrian cave, difficult to locate and access, a relief ritual is held. It is a complex place for the human being; With little visibility, the participants in the cult can become disoriented and even see their own conscience altered by natural conditions. A state conducive to coming into contact with the gods of the underworld, to whom they direct their offerings. That they ask for? "Help, help against the Romans."

This suggestive hypothesis is the one that archaeologists who have studied the surprising cave of Aspio, located in the Cantabrian municipality of Ruesga, consider after almost a decade of study and work on the ground. The main objective of the project, financed by the Government of Cantabria, was to find out what were the burial rituals of the indigenous people of the area. But they never found physical evidence that would allow them to connect the dots. Instead, the research has garnered a generous award. And not only for having found abundant materials from El Hierro Age inside the cave, such as vessels or loom swords, but - and especially - for having identified the supposed religious practices that took place in the cave in the precise chronology of the famous Cantabrian Wars or Bellum Cantabricum, the warlike conflicts between the natives and the Roman invaders in the last century before the change of era.

Despite its complicated location, the Aspio cave was already known in the 1960s. But not because of archeology, but because of the cavers who made the exploration of its interior cavities a common activity. Those expeditions made it possible in the nineties to observe the presence of different "deposits" - accumulations of various materials, such as cereals - on a natural ledge that survived in the depths of a cave whose walls had collapsed in ancient times.

The examination of the aforementioned deposits, which had been extracted for future study and the opportunity to get to know the cave better and who used it thousands of years ago, led the archaeologist Rafael Bolado and the historian Miriam Cubas to promote a project in 2013 that ended to write your last conclusions now. "We were struck by the quality of the materials that had been found, such as whole ceramic vessels and wooden objects," justifies Rafael Bolado. On the way out, there were circumstances that turned the cave into a singular space. "This type of discovery is very unusual in the Iberian Peninsula, because extreme conditions have to exist; that there is a lot of humidity and that the pieces can be kept submerged in water, or that the dryness is extreme, as in a desert," he explains .

As a preamble, those responsible for the project made a short historical tour of the different occupations recorded in the Aspio cave, since the Paleolithic. But, really, what interested the researchers was to delineate a question typical of El Hierro Age, the time from which most of the extracted materials came. What did the peoples do with their dead before the change of era? Were they cremated as in other cultures? Did they bury them, as in the most immediate territories? The initial hypothesis was that, in the area, these practices were carried out inside the caves. Now one of them had to be excavated to find the evidence.

The analyzes yielded the first surprises. "When we started the excavation we observed a blackish level, we extracted the earth and began to float it," says Rafael Bolado, about the process that consists of separating the sediments using different drums. "We identified the dark remains with various types of cereal seeds and the striking thing is that they were very numerous, thousands, like the remains of ceramics," he says. The detailed study of the grains already made it possible to draw a first conclusion. "We have been able to delve into the economy of the area, what type of crops they had; the fact that they were very well cared for and fertilized allows us to dismiss a little the idea that these peoples were dedicated solely to livestock and war: they were not barbarians ", emphasizes the archaeologist.

For their part, the ceramic remains had been preserved in an extraordinary state, with practically complete vessels. But more striking is the case of the wooden evidences, numerous and almost indelible over time. Among the recovered pieces, a loom sword is striking - an element used to tighten the fabric when it is being made - which is unparalleled in the peninsula. What's more, you would have to travel to the United Kingdom to find an item with similar characteristics.

The most important object of the investigation remained to be defined: the funeral ritual. The successive excavations tried to find human remains, but the few remains collected belonged only to the fauna of the area. So the specialists were forced to dismiss the cave as a kind of graveyard. If we take into account that, in El Hierro Age, the shelters were no longer used to live in them - at the time they lived in villages and fortifications and the caves were relegated to other activities -, the use of the cavity was limited. "If the use is not funerary or habitat, we have to think about something symbolic, cultic, related to religious worship," explains Bolado. A strange purpose in Cantabria, but "common" in the Iberian and Celtiberian areas.

The study was about to come up with the most interesting hypothesis. In prehistoric times, the use of caves from a religious point of view was divided into levels. The deeper it was, the more sacred was that part of the grotto. In such a way, that the shaman was the only one who had access to the deepest area. The theory fits with the layout of the Aspio cave. The seed deposits were found on a natural ledge located in the most difficult access area. The study says that entering these parts "entailed alterations derived from disorientation, decreased vision and changes in perception." Inside, the inhabitants underwent transformations in the brain "from a physiological and biochemical point of view" and even went through altered states like those suffered by some speleologists.

That is to say, those who accessed the most recondite were entering a space in which the senses could confuse them. In there they surely believed they were connecting with the world of the dead. "It could be a kind of door to what they believe, something that we do not know," says Rafael Bolado. Offerings to those gods of the underworld are understood in this context. Rituals that became more frequent in "times of instability", says the team of experts. And the greatest instability that is known today about that time - I century BC - is precisely the defense of the territory against Rome. In fact, the so-called Bellum Cantabricum led the Romans to fight between 29 and 19 BC against the natives, Cantabrians and Asturians.

"There may be other conflicts, because they were very warlike peoples, but at that time the only serious confrontation that we know of is that of the Cantabrian Wars," says Bolado. After these statements, the research hypothesis walks alone. The seeds found were, in reality, offerings to the gods in which the settlers believed to ask for help against the Romans. In fact, the indigenous people were aware that it would be very difficult to survive the Roman conquest and only divine assistance could change the course of history.

The unexpected conclusions allow us to expand the knowledge about the Aspio cave in El Hierro Age, say those responsible, but several unanswered questions remain on the table. The most obvious is the one that gave rise to the investigation: what did they do with their dead? "In Cantabria we have numerous Paleolithic studies, but research on a more recent period such as El Hierro Age is weaker," laments Bolado. Less knowledge of this phase is one of the factors that prevent reaching the solution.

On the other hand, experts are still wondering to which settlement the Aspio cave belonged, since to date they have not found evidence of any in the vicinity. As it is not clear which town it was. "Some authors would talk about conisks and other of the noegi, but the only thing that is clear is that it was an area almost on the border with the Autrigones, already Romanized inhabitants, "they explain. The study of the Cantabrian cave located in Ruesga has already been completed, but other sites will allow us to travel with greater knowledge to the past, because the challenge to solve the pending riddles continues.