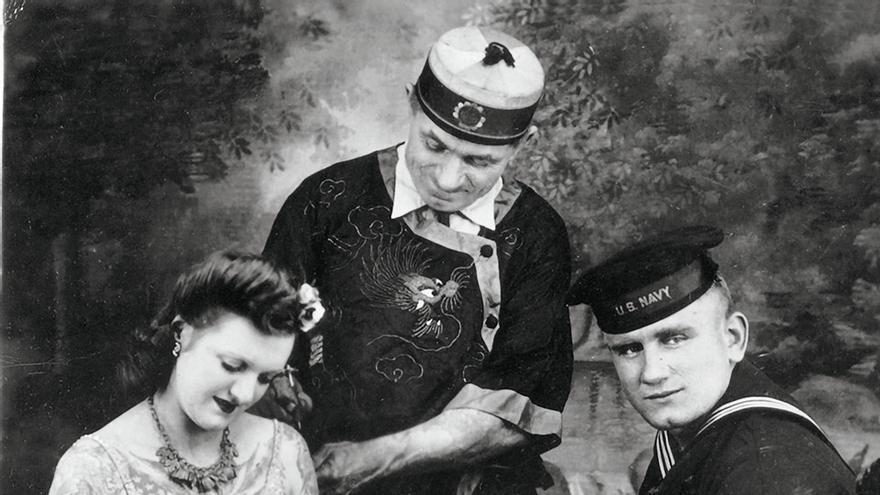 Madrid, Feb 19 (EFE) .- Tattoos are common to various cultures and periods of history, in addition to being considered “The Rembrandt of the poor” by the artist Henk Schiffmacher, who after several decades traveling and collecting these careful ornamentation of the skin, presents its own encyclopedia on this ancient art.

“The remarkable thing about tattoos is that it travels through different countries and levels of society, going from artists to criminals, prostitutes and thieves to kings, to return to the artists again”, explains the artist, tattooist and collector Henk Schiffmacher (1952 , Netherlands) about his work, a compendium of techniques, connotations and stories from the world of tattooing, of which he becomes a passionate chronicler.

“Collecting tattoos is for many of us the only way to be part of history,” explains Schiffmacher, for whom they are “the beginning of man’s artistic instinct”, whose origins date back 3,500 years, the estimated age of Otzi’s mummy. , found in the Alps with a total of 61 lines tattooed on the body.

A graphic and literary journey through the history of tattoos, this is “Tattoo. 1730s-1970s. Henk Schiffmacher’s private collection ”(Taschen). This bible on the discipline of tattoos, covers the geography and history of one of the forms of “the oldest artistic instinct of the human being”, whose techniques extend from Japan to Malaysia, Egypt and the Western world.

“Tribal tattoos”, “Ancient Japanese art”, “The age of exhibitionism”, “Born to fight” and “The good life”, are the chapters that make up this visual and literary encyclopedia on the art of tattooing and its meanings. The artist composes this book of stories and photographs about techniques, tattoo artists, utensils and connotations that the world of tattooing has acquired over time.

“There has always been a part of me that was like a magpie, that bird that is made with everything that shines”, reads the beginning of the book, which coincides with the beginning of its author in the world of the fascination for collecting and tattoos in the 70s, the date of the “tattoo renaissance” and the basis for their normalization.

“I started to collect the history of tattoos before getting the first one, I wanted to know what they were and where they came from,” says the author, who decided to leave his native Harderwijk to move to Amsterdam, where he immerses himself in this world: tattooing you also get tattooed, you give up your entire body for it ”, he tells about this time, the prelude to his travels around the world to capture different photographs and techniques of this type of art, which is“ an international language ”.

From marking a status of hierarchy in the Maori tribes in Samoa to the magical powers attributed to them in ancient Egypt, going from being a hallmark of criminals and thieves in Japan to end up re-integrating into Western popular culture, tattoos they are the common chart of different civilizations and time bands.

After years of researching on the subject, Schiffmacher thinks that “they say more about a person than anything else”, and he finds his greatest wish is that “one day Unesco includes the traditional tattoo in the list of intangible world heritage assets”, explains throughout its pages, after a life dedicated to studying this type of art.

“I keep a tattooed skin of a person from 150 years ago, she is gone, but her tattoos continue to communicate every day,” he explains about a small part of his extensive sample, the result of a common practice in Japan by which people with the body tattooed in “Irezumi” or traditional Japanese art, they donated their skin upon death.

A style of tattooing that becomes a hallmark of Japanese tattoos, and that together with the “uki-yo” drawing technique, promoted by the artist Utagawa Kuniyoshi and that the author defines “as if Rembrandt had painted Marvel superheroes through tattoos ”, make Japan another key point in the geography of this art, which the author breaks down and details in his pages.

After decades dedicated to archiving and collecting graphic documents, the key for the author lies in “the power of images” that tattoos project through this “simple language of communication”, valid anywhere in the world since primitive times, in the that “the first tattoos already revealed the human need for expression through art.”

In a compendium of more than four hundred pages in which “the images tell their own stories”, Schiffmacher thus becomes a chronicler of tattoo through his extensive collection, with which he makes “a tribute to the ancient world of tattoos” as artistic nexus between different cultures and periods of history.