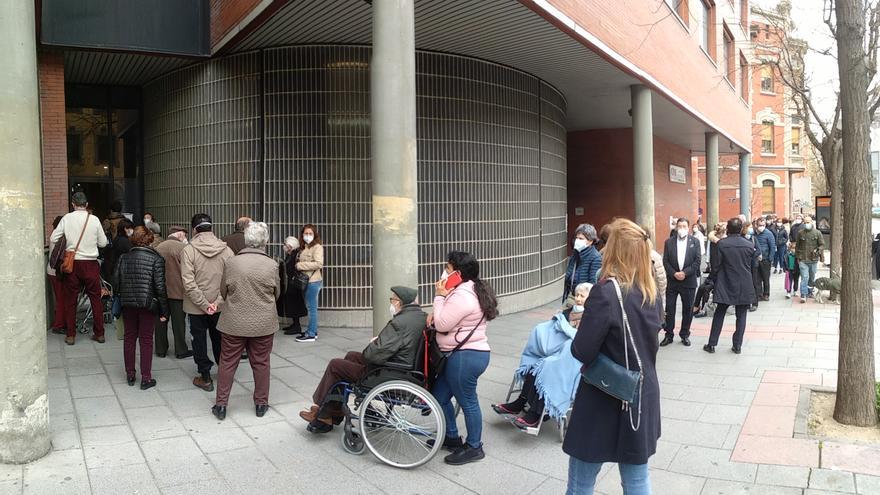 Almost on the fly and with hardly any time to organize (in some cases, just one morning), the health centers of the Community of Madrid have begun today to vaccinate people over 80 against COVID-19, after announcing, correcting and qualify the regional government this week, successively, the start date of the campaign. The expected first dose for one of the groups at greatest risk was given between 3.30 pm and 7.30 pm with traffic jams outside some outpatient clinics, where the elderly, with obvious mobility problems in several cases, waited accompanied by their relatives for give them time. Meanwhile, the president of the Community of Madrid, Isabel Díaz Ayuso, visited the Atlético de Madrid stadium today, where police, firefighters and civil protection personnel have been vaccinated without restrictions. Ayuso thanked the club for providing the facilities “with safe circuits, different positions and the possibility of having rest areas,” according to Europa Press.

At Goya’s health center, however, the traffic jam was reminiscent of waiting to buy tickets for a highly anticipated concert. José María de Blas, who was about to turn 97 years old, was called in the morning to show up without fail in the afternoon. “This is’ either take it or leave it,” explained her daughter, watching the man, in a wheelchair and looking a little lost, who had not left the house for two years. In four hours, about 220 vaccinations had to be given, which meant little more than a minute per puncture, which made the queue unavoidable, and at five in the afternoon it was already around the corner. Some ended up sitting on the sidewalk. “The president had to be here, and not in the Wanda [el estadio del Atlético]”complained the son of another nonagenarian in the queue.

José, a patient guardian, tried to buy time by distributing the previous questionnaire (with five questions about possible allergies, symptoms and other contraindications), while trying to comfort the dozens of older people who were waiting their turn. “Don’t worry, there are many of us,” answered a woman, sitting on some steps, somewhat fatigued. “This is a little badly organized,” snapped someone in line. The orderly complained: “We don’t have personnel to attend to all these people, we don’t even have fixed chairs.” He also attributed the accumulation to the fact that patients “instead of coming at their time, they came suddenly.” And he explained that they were having allergic relationships that forced them to wait longer than expected, with the consequent delay.

The problems were not of the same magnitude in all outpatient clinics. At the University, in Malasaña, the queue was not very long after 4:00 p.m., but the narrow sidewalk on a street with vehicular traffic made access difficult. Teodoro, who couldn’t walk, waited inside the car, parked badly, while his daughter, Maricruz, stomped worriedly. “Come here, dad, you have to keep your distance,” a daughter urged her father, at the request of the guards. “This is chaos, this is shame,” protested Antonia, José Ramón’s daughter.

That there were going to be problems was anticipated by the union representatives in the morning. “It has been an absolute lack of control”, warned Víctor Jiménez, from the Madrid Independent Nursing Association (Ame), who pointed out that the lists did not reach the centers until today, in some cases, and that they were out of date, even with names of deceased persons.

At the Rafael Alberti Health Center in Vallecas, the staff was relatively convinced that they would cope, even barely, to vaccinate 60 people. “The day before yesterday we found out from the press that it was going to start today,” says Nacho Revuelta, one of the doctors. The staff called out. “We have filled in the gaps, but we have gone crazy trying to locate people. The administrators calling, the doctors asking other patients with whom we consulted for another reason … It has been an active recruitment so that the vaccines are not lost, all very improvised “, says the doctor, who recalls that the centers” are already permanently saturated, “so the lack of foresight and reinforcements is a double problem.

Organizational problems also affected the group of school teachers, who also today began to be vaccinated in the primary care emergency services. “There are people who have received SMS from three different places,” says Isabel Galvín, from CCOO, for example, who also says that people who were initially excluded from this first inoculation were called, as professionals on leave of absence. The union representative censures that “it has not been planned in advance, despite the fact that we have been raising it for months” and criticizes that “there is also no telephone” where to find out.