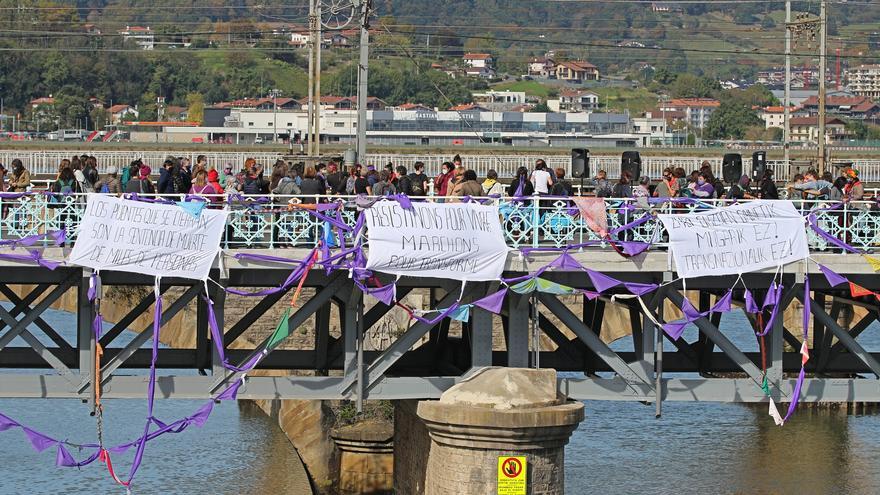 It already happened in 1981, in Greenham Common, Berkshire, England. Welsh feminists camped out next to the American military base to protest nuclear weapons. The following year there were 30,000 women. In 1983, 70,000 women formed a 23-kilometer chain, from Greenham to Aldermaston and the munitions factory in Burghfield. The Women’s Peace Camp became a global benchmark for feminist antimilitarism and lasted until 2000.

Euskadi had its reply on December 16, 2017. The Feminist Movement of Euskal Herria chained itself to some of the wire fences of the Santurtzi port for denounce the use of war as a business and the use of borders as places of war. They did so just after a four-meter-high concrete wall was unveiled at the site, erected to prevent immigrants and refugees from clandestinely accessing ships bound for Portsmouth, UK. They also denounced that, from that same port, weapons were leaving the Basque Country to other countries at war.

As Naomi Klein says in The shock doctrineBefore, war served to control territory, but what was lucrative was the stability of peace after the conquest. But, When you have seen the amount of money that war generates, the conflict is the business. That 2017, 36 million euros from the General State Budgets had been allocated to Defense, and that only counting what is officially communicated. The rest escapes in other items, such as R&D budgets, destined more to weapons research than to breast cancer; or those invested in NATO’s Blue Helmets, which are included in Development Cooperation, as explained in this interview.

As a consequence of this business, millions of people around the world are forced to move, encountering walls and barbed wire at borders, if not gunshots. The strategy works: sale of weapons and military devices and, later, sale of security to ‘protect’ the countries to which those suffering the consequences of the conflict migrate. With the pandemic, we need more security, we no longer have to protect ourselves only from other people, also from the air. But that is another issue, although it is linked. Let’s say Israel, a pioneer in security systems, rubs his hands.

Last Saturday, the complaint was against “the operation of transnationals, borders and migration policies as instruments of the racist, colonial, capitalist and heteropatriarchal system. “This time, the mobilization was called by the World March of the Women of Euskal Herria. They took the pedestrian bridge on the border with the French State, the one that connects Irún with Hendaia. The scene, flooded with purple handkerchiefs, once again replicated the idea of ​​the Women’s Peace Camp, taking a specific place where the conflict is embodied. “A border imposed by the nation states and that divides the Basque people, and that reinforces the ‘Europe Strength’. We come here to point it out, to denounce the violence that occurs within the framework of this border backed by racist and colonial migration policies, “it reads. the notice.

The march did not end on October 17. He wants to advance, from town to town, until March 6, to ensure participation from other places until returning to the starting point, the pedestrian bridge. Feminism, anti-militarism and anti-racism intertwine, identifying the “privileges on which the welfare of Europe is based”. “What do you think of the use made of millionaire budgets to strengthen borders? In what conditions do migrant people work in Basque homes?” The statement asked.

These questions challenge us. Who says Basque homes can speak of Rioja, Castilian or Valencian homes. The logic of borders as imaginary of war, that of plundering and investment in weapons is contrary to life and responds to a system of domination that is totally contrary to feminism. Also, we already know: in conflict, women’s bodies become booty and territory of conquest.