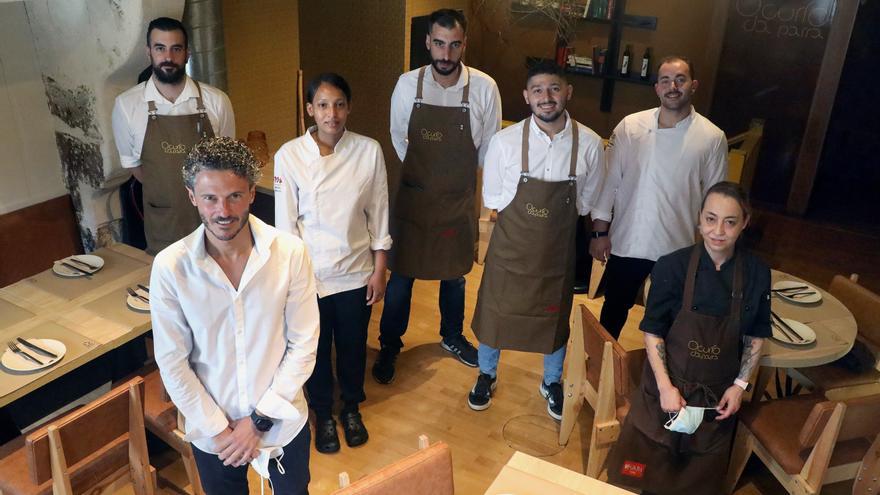 Santiago de Compostela, Jul 4 (EFE) .- Located in the heart of the historic center of Santiago de Compostela, a few meters from the Mercado de Abastos and very close to the Cathedral, O Curro da Parra has become a gastronomic icon of the Galician capital, a must for the thousands of tourists who come to the city every year, a regular stop for the people of Compostela.

Its history has been very fast. Its owners, Queco Arias and Adrián Comesaña, met in London at the prestigious Cambio de Tercio restaurant. There they catered to some of the best rackets in Wimbledon, prestigious musicians and actors like Bono and Hugh Grant and part of the upper class of British society and royalty until ten years ago they decided to return to their land to start their own business.

In a 19th century house with an entrance through a cul-de-sac, they found the perfect destination for their gastronomic dream. “It was a risky bet but it was worth it,” he recalls in conversation with Efe Comesaña, maitre de Cambio de Tercio in London, where he closed his stage with the opening of Ibérica Restaurants with Asturian chef Nacho Manzano, two Michelin stars.

His project in Santiago is focused on quality Galician gastronomy, with certainly imaginative dishes and an informal treatment. It is a concept for all audiences based on work, care and technique.

His continuous conceptual innovation has allowed him to vary his dishes. His proposals began to deserve congratulations in his community but also at the national level, the last this week: a “solete” from the Repsol Guide. “Each award, each recognition, is one more incentive to continue improving,” says Arias.

Not surprisingly, O Curro da Parra has become a school for cooks. Some of the Galician restaurateurs with the greatest projection have been trained in its kitchens: Alén Tarrío (Cook 2019 of the Gastronomic Forum), or Miguel Liboreiro (Bib Gourmand 2021); and even the television Alex Alcántara (Bache Restaurant, Seville).

Its surprising dishes constitute, according to the critics, encyclopedias of flavors of the best Galician products, designed with techniques inspired by the experiences of Arias and Comesaña in London.

They are flashes of an innovative cuisine supported by exceptional products, almost always acquired in the Abastos market, the epicenter of its world, the second most visited place by tourists who come to the Galician capital.

The surroundings of the Compostela square has also been the place chosen for his new projects: Pazo de Altamira, an old medieval palace of the Count of Altamira restored into a 16-room boutique hotel, with a restaurant on the ground floor where you can enjoy authentic Galician cuisine with contemporary taste, awarded one more year with the Bib Gourmand 2021; and O Xardín de Julia, a charming guesthouse located in an old stone building with one of the best gardens in the Old Town.