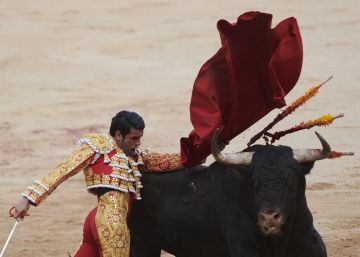 The best muletazos of the afternoon took to the place with the step changed. Or, better, with the hands occupied, the mouth full and the attention deviated. It is understood that the event occurred during the bull of the snack, the fourth of the afternoon, of very poor quality in its entrails, but to which Emilio de Justo dealt with intelligence and good taste. But his work only interested those who are dieting in this square, which are very few; the most, including those who occupy the shade, only direct their gaze towards the opíparo bocadillo and the wine boot. Conclusion, that De Justo passed it close and endured drunkenness and caught only the curiosity of the president -at that time, the mayor of the city, dressed in the dress code and the top hat-, and of some young girl from juncal figure. Maybe that's why he ended up with the so-called manoletinas before repeatedly failing with the descabello and listening to the censorship of those who already had a full stomach. Problems of nutrition in San Fermín.

The first ordinary fighting bull of the San Fermín fair was a firecracker; He came quickly and thrust into the horse, and perhaps punished him excessively; Anyway, he starred in a third that already wanted for the current bullfighting. But that was it. Beautiful picture, serious and very well armed, broke down in banderillas, and forced the crew to spend a bad drink because the animal was specialist in arreones, braking and strange glances that did not give rise to confidence. In this way, when De Justo approached his terrain, little hope existed. So it was. The bullfighter was placed in the right place, insisted on both sides, but the bull cost him a world to follow the deception, his journey was very short, without fixity and without class, and everything was in the proven effort of the lord dressed in lights.

And since there was no brave bull, no emotion or option for heroism, silence took over the square, and the rocks did not say this mouth is mine during the whole fight. In fact, the chorus of the rocks with 'La girl ye-ye' as a flag did not make an appearance until the third of rods of the second bull, another piece, meek in rods and very short in banderillas.

It was the turn of López Simón, who walks in serious doubts about his bullfighting concept; Maybe that's why he seemed to care more about the lines than about the conditions of his opponent. He dropped to his knees at the start of work to get the attention of the sun, and drew up to seven muletazos by height, which were nothing more than the aperitif of an empty table. The bull was worth nothing, unemployed and without any zeal, but no less than bullfighting from Madrid, vulgar and extremely high advantage. Above, the sword appeared from the side and that was the end of the mess. Again he placed himself on his knees before the fifth, in another faded attempt to connect with the 'fans' of the sun, but it could not be. So out-of-date was the bull and so lacking in life he was, that, exhausted of charging with reluctance, he told Lopez Simón goodbye, very good and lay down in the sand halfway through the job. The bullfighter, it is true, was anxious, but that attitude is not an explanation, not reason enough to go around the ring at his own risk. But these things, you know, happen in Pamplona, ​​and nobody seems to bother.

Good muletazos sprouted from the left hand of Ginés Marín in his first, but few listened to him. It was that other bull without relevant qualities that came with some humiliation and fixity in a batch of good natives who were no more than a mirage, and not because of the bullfighter, who tried again on that side when the animal was already more than regretted his brief collaboration. In view of this, and that the public did not react, Marín opted for two turnstiles on his knees that only served to put him in serious danger of somersaulting. Neither served the sixth, very dull, despite the decision of the bullfighter and the final manoletinas. He tried really the Extremadura and came to steal some natural long truth, but there was no more.

It is clear, however, that on this occasion the culprits of the disappointing afternoon were the Salamanca bulls. It is not always like that, but it is today. Kilos, pythons, facade, but empty of content the six that jumped into the ring. And when the protagonist insists on spoiling the celebration there is no way to fix it. Well, where is a good snack, kilometric sandwich, omelette, tenderloin or lean, and a good wine, white or red, which takes off a run … And that's what happened …

Bulls port of San Lorenzo, well presented, serious and well armed, meek on the horse, except for the first one, soft, bland, dull and out of date.

López Simón: thrust that makes guard _aviso_ and a descabello (silence); thrust (return to the ring).