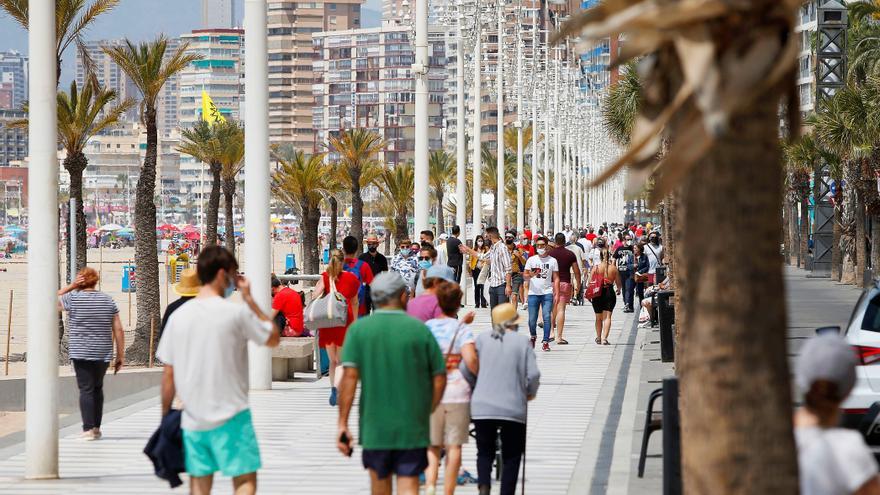 The start of the first weekend without mobility restrictions has left this Saturday images of a certain normality prior to the pandemic with complications in traffic, especially at the exits of Madrid, crowded beaches and family reunions.

Meanwhile, the data provided this Saturday on the evolution of the pandemic by the different health authorities of the autonomous communities – the Ministry of Health does not offer data on weekends – they continue to reflect a general downward trend in cumulative incidence.

After an early Saturday morning without major incidents or crowds such as those registered on the 9th, the morning it started in Madrid -where is local holiday for San Isidro– with complications practically on all outings, especially the highways of Burgos (A-1), Valencia (A-3) and Extremadura (A-5).

An atypical situation in recent months like that of the Beaches, especially those of the Mediterranean coast, which have begun to register the arrival of bathers wanting to enjoy the sea after months without being able to do so.

It is what has happened, for example, in Murcia and the Valencian Community where many arrived this Friday, when there were already increases in trips of up to 53% between three and seven in the afternoon compared to the same time slot the previous week.

“Since they closed us … working non-stop and now we have some savings and we have time, especially, Friday, Saturday and Sunday that we come “, a tourist commented to Efe.

It will be precisely this recovery of national mobility that will begin to a little oxygen to the punished tourist sector, while the authorities insist on the need to maintain the measures in parallel with the advancement of vaccination and group immunity.

Thus, the Community of Madrid has communicated that the cumulative incidence below the extreme risk of 250 cases per 100,000 inhabitants, something that had not happened since the end of last March.

On Andalusia, the incidence rate has also recovered its downward trend, standing at 165.9 per hundred thousand inhabitants, 5.6 points less than the day before.

On Catalonia In the last 24 hours, the death of a person and 1,030 infected have been reported, in a downward trend confirmed by other epidemiological data, such as the risk of regrowth, which stands at 167, thirteen points lower than on Friday.

On Balearics the cumulative incidence is 46.5 cases per one hundred thousand inhabitants, thus returning to “low risk” due to the pandemic, a situation that has not occurred on the islands since March 24.

In other communities, other variables such as infections have also been reduced, as in Aragon with 198 new infections, 35 less than a day before; while in Castilla y León the pandemic has left four dead and 262 new infections reported, 19 cases less.

On EstremaduraOn the contrary, in the last 24 hours there has been a new increase in positive cases with a total of 93, although the cumulative incidence also continues to decline, standing at 82.89 cases per one hundred thousand inhabitants.

On Navarre, 75 cases were detected this Friday, with a positivity rate that has been reduced by three tenths, and 111 patients were admitted, seven less than the previous day.

On The Rioja, on the contrary, there were 17 more active cases, up to 442, while in Asturias infections have remained stable and in Murcia 59 new positives have been registered, eleven less than the previous day without any deceased.

In the Basque Country the rate of positivity has remained below 5% for the fifth consecutive day, and in Cantabria a death has been registered after six days without notifying deaths.

On Ceuta new normal data have been reached with an average of 24.94 cases per hundred thousand inhabitants.