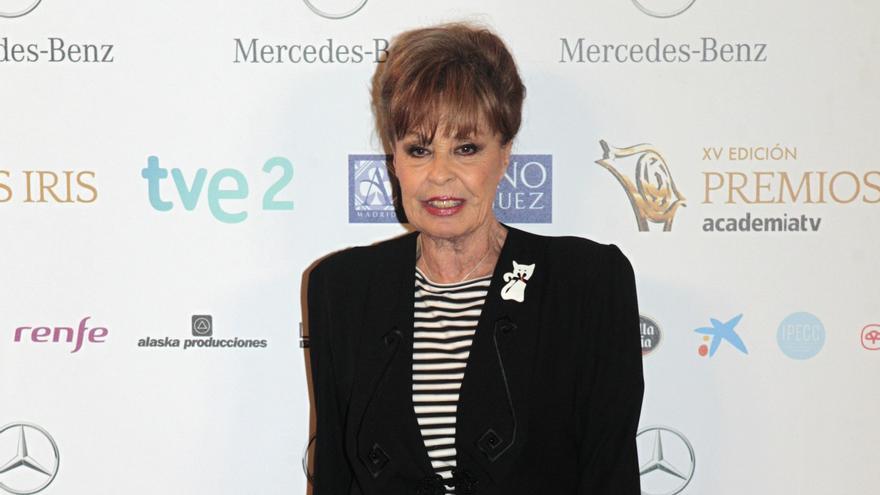 Madrid, Jun 18 (EFE) .- With 65 years of experience and many successes on stage, the actress Gemma Cuervo feels “happy, respected and much loved” after knowing that she will receive the Max de Honor, an award that she hopes “with tickling in the stomach; I am as excited as a child when she waits for the Three Kings. ”

In an interview with Efe granted after knowing herself the winner of the Max de Honor, the award that distinguishes a person’s career for their contribution, dedication and defense of the Performing Arts, Gemma Cuervo (Barcelona, ​​1934) has recognized that she is very excited that remember her, that you have so much affection and respect for her as to give her this “so extraordinary” award.

It belongs to a generation of tough, brave, vindictive and feminist actresses. “Now we are doing a little better with feminism, but we are doing very badly.”

He does not attack men, he is in favor of being taught what not to do, that they erase the atrocities they do from their lives. “Normally women don’t drag corpses in suitcases. Machismo is breaking lives.”

“The most rewarding thing in my career has been doing theater,” explains the actress who recognizes that her profession is very special, since the books that she has not read have been interpreted. “It has been fantastic to bring to life the figures that an author created.”

THE THEATER, A RECREATION OF THE SOUL

The theater is his life, “a recreation of the soul.” The performance “is a truly extraordinary exchange of souls,” adds this actress who has a fruitful career, more than a hundred theatrical productions and her own company with her then-husband, Fernando Guillén, who died in 2013.

“The theater serves to transform societies, to give communication and so that the equality of the human being is unified through the great texts”.

At the moment, she doesn’t want to hear about retirement – just “to collect it”, she laughs – this actress who began her career in Barcelona at the Spanish University Theater in 1956 with “Don Perliplín’s love with Belisa in her garden”, of Lorca.

He made his professional debut with Adolfo Marsillach with the play “Harvey” in 1959. Later, José Tamayo threw the cane at him to join the Lope de Vega Company and the Spanish Theater in Madrid, where he performed “El avaro” by Molière or “La Orestiada “by Aeschylus, among other pieces.

No work has been left in the pipeline. “They have always given me very good texts and characters; it is not that they have pampered me, rather it is that they needed me and then and I have felt pampered more than needed.”

Although his work in the cinema has been more limited – he has participated in more than twenty films, among which are: “Life is wonderful” (1955), “The scandal” (1963) or “The boys of the preu “(1967) – his love for the big screen has also been passionate but less intense.

“THEY HAVE ALWAYS RESPECTED AND LOVED ME”

He makes a “very positive” balance of his career. “They have always respected and loved me, I have worked with all my strength whether they find me good or bad.”

However, it has been on television, where it has reached its greatest popularity. He had a great success with the character of Vicenta in “Here there is no one who lives”, a series of which he keeps very good memories.

“It was all very funny, I miss this time on television a little,” says this actress with regret, who does not let it be overlooked that she has done a lot of television and very good, “but this series, my last work, was a charm, I made it with all my soul my illusion “.

Suddenly, he has no regrets. “If I reflect a lot, yes, but now I’m happy and I don’t remember anything,” he says with a smile.

He says that the theater is for people with special pasta. “Those of us in the theater have to have a very strong health,” he warns while pointing out that “now everything has improved a lot.”

He has worked a lot and not in the best conditions. “Today the theaters are beautiful, before it was not like that, we worked in spaces with a devastating cold and in some, when the water entered, it reached the bone of the ankle”.

He regrets not having reported these hardships. “Not having done it, it would have helped me improve”, says this veteran actress who, despite the difficulties, has not found it difficult to reconcile the professional sphere with the family one, she is the mother of three children. “They have helped me so much and with such kindness that I am very grateful.”

Satisfied with everything she learned, she now dedicates herself to enjoying life, living in peace. “I want to give happiness to others and I receive the love of my family and my colleagues, what more can I ask for”.