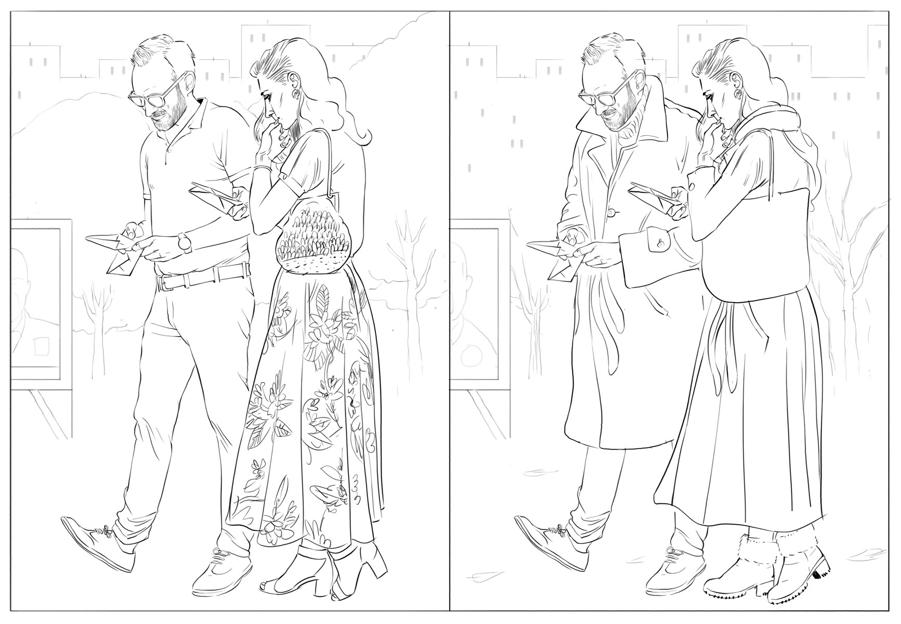 The elections that nobody wanted come in a political and social climate that does not invite optimism. The cold comes and some concepts of this strange time allow a short dictionary.

The mask of Guido Fawkes in the movie v for Vendetta It has become a symbol of protest in internet times. New symbol even though the mask comes from an ancient history: Fawkes, a Catholic soldier, tried to kill King James I by flying the English Parliament in the so-called Gunpowder Conspiracy, 1605. The symbols are always reusable. Anonymous's mask serves both today for a leftwing sweep and a nationalist scrubbing. The digitized masses long for anonymity.

A few weeks ago, some polls led us to believe that Spain was starting a trip back to the bipartisanship of the last decades, with a possible reinforcement of the PSOE and the Popular Party against the new political formations. There were sighs of relief in some instances: the old order returns. That expectation has cooled. Waiting for tonight's results, everything points to the continuity of a multi-party scenario. The fragmentation of Parliament can be even greater today.

The mixed group in the Congress of Deputies could in the future adopt the name of the Carlista Group. There will be, predictably, the deputies of Bildu, Junts per Catalunya (if it fails to exceed 15% in all
four Catalan provinces), CUP, Navarra Suma and Teruel Exists (if it obtains representation). Being very different from each other, all these groups have in common a significant electoral establishment in areas of old Carlist tradition. (Observation contributed to this dictionary
by journalist Jorge Dioni, who knows the history of Spain well).

The word had never been spoken so much Catalunya in the campaign of a general Spanish elections.

Yesterday's meeting of the Monitoring Committee of the situation in Catalonia, under the presidency of Pedro Sánchez, is a clear example of television dramatization. Images of war room during maximum audience hours. There are many ways to want to influence the so-called reflection day. Saturdays with special effects.

The name of Spain had never been so pronounced in the campaign of a general election.

The appearance of fire always alters everything. Images of the burning containers on some streets in the center of Barcelona modified the meaning of the protests over the Supreme Court ruling three weeks ago. The fire scares. The restless fire. The fire terrifies. When the flames appeared, millions of Spaniards began to feel that the Government lost control of the situation. And the Government began to suffer. The script was broken based on which the repetition of the elections had been propitiated. Hot air columns on the streets of Barcelona raised Vox in the polls. The Tsunami Democràtic (see letter T) promoted the occupation of El Prat airport on October 14. The next day, someone wanted to add fire to the escalation of tension. Someday it will be known who set the containers on fire: the most frustrated young independence people, or a strategically oriented hand. Maybe both lighters at the same time.

In Waterloo, scene of one of the great defeats of history, this summer they liked the images of the Hong Kong protests, taken from the airport included. The Hong Kong pack is made in the UK. The most angry young people of the former colony provide combative infantry.

Strong outbursts of anger in various parts of the world in no time. Very different social realities (Hong Kong, Santiago, Chile, Quito, Beirut, Barcelona …) twinned by virality in social networks. Phenomenologies of a new time. The German philosopher Peter Sloterdijk advanced in 2010 that snorts of anger would be a constant in a world in the form of "shaving foam", a world formed by a multitude of small individual spheres connected with globality and subjected to precariousness. Holds Sloterdijk in the book Anger and time that the old workers' organizations were savings banks of anger, capable of a dosed administration of this. The Third Communist International was the last major bank of anger worldwide. The centrality of the factory disappeared, the episodic outbursts of anger are geysers of a new landscape characterized by autonomous work, mobile phones and headphones in the subway.

Joker is the sosias of Arthur Fleck, a psychopath who sows chaos in his city after being brutally beaten by three executives. The world premiere of the movie Joker , by Todd Philips, has coincided with the incidents in Santiago, Chile, Beirut, Barcelona and other cities. Joker laughs uncontrollably. Joker is also a mask: the face of a crazy clown. For a few days in October, Joker won over Anonymous in the streets of Barcelona. Then someone stepped on the brake.

Concept coined during the last months in the Moncloa to define the approach strategy to 10-N. Repeated elections in a tense autumn, in which a hard Brexit (October 31) and medium-intensity protests in Catalonia were foreseen, following the ruling of the Supreme Court. Finally there has been no wild Brexit – Brexit has been postponed again – and the protests in Catalonia have been much harder and more intense than expected. There are no perfect plans in times of digitalized discomfort.

Article 99 of the Spanish Constitution allows any citizen of legal age supported by a parliamentary majority to be elected President of the Government by Parliament. The candidate proposed by the King does not necessarily have to be deputy. To date, all presidents have been deputies. Till the date.

In a few months the figure of Iván Redondo, aulic advisor and chief of staff of Pedro Sánchez, has become the center of many looks in Madrid, a city that loves concentrations of power. Redondo is attributed the most risky decisions of Sánchez in recent months, starting with the repetition of general elections. If things are going well for the PSOE tonight, Redondo will be on the shoulders of the Las Ventas bullring. If the results are adverse for Sánchez, the consultant can become the fuse of all the bad moods. Redondo is an influential man in Moncloa, but he is not Rasputin. The repetition of elections is a strategic decision adopted by the current leading group of the PSOE, with Pedro Sánchez at its head.

Main reference figure of European right-wing populism, together with Hungarian Prime Minister Viktor Orbán. Salvini was alienated from the Italian government last September, but is building up forces to return, as leader of the entire Italian right. He has abandoned the rejection of the euro. He accepts that Mario Draghi, former president of the European Central Bank, may be the future president of the Italian Republic. He approaches the European People's Party and cultivates the support of the most conservative wing of the Catholic Church, facing Pope Francis. Salvini is the model to follow by Santiago Abascal.

Today's elections can show that the important thing in Spain is not the brands but the grooves. Political brands appear and disappear. The grooves remain. Five grooves are guessed in today's result. Let's see them. The post-Francoist groove, always existing, retracted for years within the Popular Party, now uninhibited by the success of the new authoritarian languages ​​in the world; a groove excited and scared by the events of Catalu-nya. The groove of the conservative right that looks at Europe, which feels European, but cannot build political majorities without the groove described above. The furrow of the Spanish Socialist Workers Party, party of the people and the State, a party that tends to be considered the exclusive "manager" of Spain, which is why he wanted to repeat elections in search of a wider majority that does not force him to pacts uncomfortable The groove opened by the Communist Party during the Franco regime: the resistance, the Pyrenean, Workers Commissions, the protest … a groove that has changed its name, but not a spirit. The groove of Catalan, Basque and Galician nationalisms, confronted with Spanish nationalism: calm or excited nationalisms according to the circumstances, a groove from which the independence gutter that today irrigates Catalunya mediates. Those are the grooves, the rest are brands. If you look closely, they are the same grooves of 1977.

Wave pool in which the convergent faction more radicalized and less willing to lose power will try to drown Esquerra Republicana so that it does not become the new hegemonic force in Catalonia. The Catalan regional administration currently manages a budget of 23.642 million euros and has more than 200,000 public employees. The Generalitat has power and in Catalonia one fights for power. There will be waves until the next elections to the Parliament and its intensity will be regulated from Waterloo. The key to the elections is Joaquim Torra.

The new electoral map can lead to unprecedented maneuvers in Congress

The November Vox is not the April Vox. They have learned the script of Salvini. More social messages in search of an electorate that goes beyond the nostalgic of Francoism, bullfighting lovers and devotees of wounded masculinity. Broad-spectrum messages addressed to people fed up with politics (the last CIS barometers are chilling about it) and scandalized by the events in Catalonia.

Honduras must “redouble” efforts to repair victims of the crisis