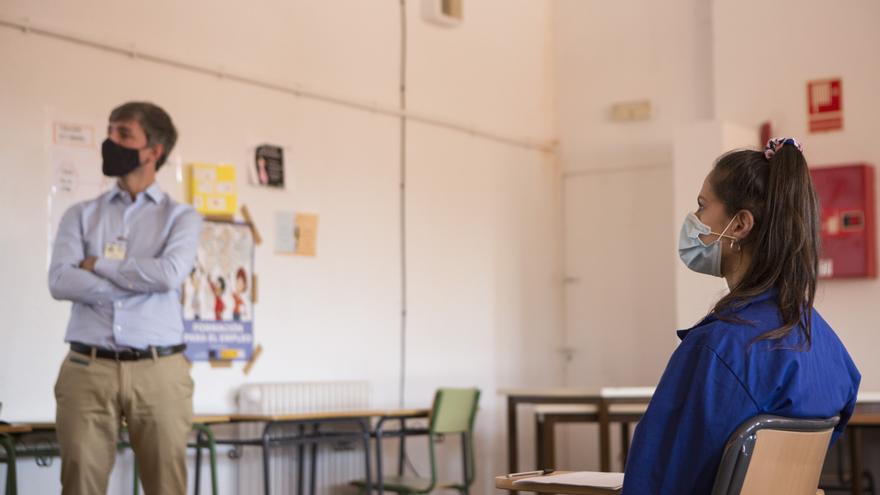 Sitting in front of a future, 17 women attend a workshop where three men give them ideas about how to manage one of the most difficult ties for anyone: the one that links you to a bank. To the financial institution, it is understood. They ask how to make international transfers or how to avoid payments on a loan when you are “in”. In this case, within Alcalá-Meco. Because, in addition to being a woman, most of the students share others: being poor, foreigners and that a man made a profit from them. The three men who speak to them have other intentions: to explain the APR, the difference between credit and loan or raise, albeit succinctly, the recurring debate about whether mortgages should be requested at a fixed or variable rate.

Alcalá-Meco I appears to be the garden of Alcalá-Meco II. The first is a women’s prison; the second, of men. From the outside, the latter appears as a succession of dungeons surrounded by high walls surmounted by barbed wire. In Alcalá-Meco I, on the other hand, the modules are constructions with a pyramidal roof and two floors that could be reminiscent of a modest youth hostel if it were not for the enormous lock on the cells. The inmates circulate around the compound with relative freedom. It is Wednesday and autumn lends its last rays of sunshine.

In one of the prison premises, the 17 women listen in absolute silence to the explanations of the territorial director of Banco Santander, Alberto Delgado, who has lent himself to give the workshop in Madrid Finance for mortals with which the entity has already visited several men’s prisons in Galicia, Cantabria, Valencia and Castilla y León.

The prison director, Jesús Moreno, explained to a group of journalists outside that the 17 women had to be selected because there were many more candidates for the course. Inside, the bank representatives explain how important it is for the “family economy” to live with 90% of your income, dedicate half to housing, electricity, water … another 30% to leisure or clothing, and leave the remaining 20% ​​to save and cover any unforeseen event. They speak of opening an Excel file, but it is enough “with a sheet of paper” where to reflect it.

The explanation is interrupted with a humorous video about the life of a spendthrift at home, or another explanatory of banking concepts starring Leo Harlem. Bankers take the floor again to explain the difference between the TIN and the APR. But now is the time to talk about the Euribor, so important for variable rate mortgages. “It’s the price of money,” says Delgado. And it seems that, for a moment, he realized the absurdity of that description outside the world of economists. “Well, it’s cool to know,” he says to get out of trouble before the “mortals.”

Alberto Delgado is a middle-aged man, in a suit and without a tie, flanked by two assistants dressed in a somewhat more casual way, one of them much younger, who are truffling their speeches with plain explanations and some notes. Between the three they take the opportunity to explain the difference between credit and loan.

In the second row, Denís listens carefully. He is 23 years old, he is from Venezuela but has been in Spain for four. Just a few months in prison. “I already entered with the pandemic,” he later explained to the journalist. Denis uses Question Time to find out if the bank interrupts loan payments when you are in jail. The representative of Santander recommends negotiating with the entity that they stop pending the fulfillment of the sentence, but warns: “You will continue to pay interest.”

Karen is on the only bench in the front row. 28 years old, Brazilian, petite. Her story is that of so many companions. They arrested her in Barajas as she set foot in Spain, so she has learned the language in jail. In addition to the place he has chosen to sit, he stands out for his outfit: he comes from a paint shop and has not had time to remove his stained jumpsuit. He has served half his sentence and the Board of Treatment is deciding on his third degree. Everything you learn today can only be put into practice in Velo Horizonte: your conviction implies immediate expulsion. If you are granted provisional release, you will go straight to the plane.

“Be careful with providing a guarantee”, explains Alberto Delgado: “It seems easy to sign and it has no consequences, but if the person you guarantee does not pay, you end up doing it.” All in all, its message-strength is the following: “You have to build your financial history.” He repeats it several times and at the end he gives a clue as to how important it is not only for the family finances to break down: “It is good that your bank knows you, for example when you are going to ask for a mortgage.”

Talking with Catalina, a 37-year-old Colombian, allows us to intuit that she is perhaps the intern who has brought the most out of the conversation. Catalina had a business in her country selling clothes and beauty products over the Internet. Its history in Spain is back and forth. She returned to her country of origin and was arrested there for a crime claimed by Spain. She explains that she is paying for her ex-husband’s mistakes, that there was nothing to condemn her with… And that she talks every two days with her ten-year-old son, who is cared for by her family in Colombia.

“In Spain there is a certain racism, although it is not generalized. When you go out with a bracelet it will be difficult to find a job,” he explains fluently. So she chooses to be an entrepreneur, hence her greatest interest in what they have come to explain to her. Catalina entered a Colombian prison three months pregnant. “This jail, compared to the ones there, looks like a university exchange,” he says, tilting his head.

Inside, other inmates have asked about the possibility of using the Bizzum with other countries -no answer- or opening an account and putting it in the name of a son or grandson, who are also grandmothers among the assistants, despite the fact that they are all relatively young. It is not difficult for Mariana to smile. She is Venezuelan and also has Spanish nationality. She was arrested in Austria and extradited to Spain. It is helpful if your German speaking can help you when you go out. “At first it seems impossible for a Spaniard, but he ends up learning,” he says. Then, she takes arms with her friend Denís, and they head to the dining room: “The course is very good. Here the days are very long.”