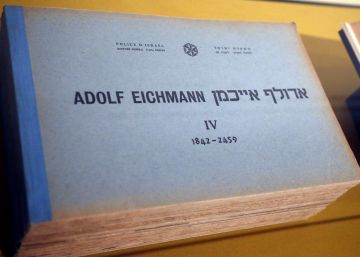 It is surprising to see that the program Aktion T4, forerunner of the plan to tackle the extermination of the Jewish people, is today unknown to many young Germans. It is surprising because German society is not characterized for having turned its back on that dire episode in its history, but also because if the reason for confronting the past is, as has been said so many times, that such an episode does not repeat itself, then everything that happened before should be studied with as much or more attention than the horror displayed later.

The program I’m talking about, whose enigmatic name perhaps responds to the difficulty of revealing its objective, it was a death sentence applied without consent on terminally ill patients. Perhaps due to this difficulty, the name of the action is summarized in the acronym and the street number where his plan was written, Tiergartenstraße, 4.

In 1961, Hannah Arendt, 20 years after her exile to the United States and proud of her American citizenship (not her nationality), was commissioned by the magazine The New Yorker to cover the trial that will take place in Jerusalem against the then alleged war criminal, the incontrovertible Nazi official Adolf Eichmann found in Argentina a year earlier. The report would be published in installments in five successive editions of the magazine, compiled in the book Eichmann in Jerusalem, and later in its abridged version Eichmann and the Holocaust.

In his chronicle, Arendt refers without naming it to the involuntary euthanasia program previously referred to in this way: “It is a fact known to all that Hitler began his mass murders granting ‘a sort of coup de grace’ to the ‘incurable patients’, and that he intended to finish off his extermination program by removing the ‘genetically damaged’ Germans (heart and lung patients) from the midst. ”

“It is a fact known to all that Hitler began his mass murders by granting a ‘graceful death’ to the ‘incurable patients’, and that he intended to finish off his extermination program by removing the ‘genetically damaged’ Germans (heart patients). and lung) “

Rereading this impeccable reporting journalism exercise, one month after the situation with no expiration date in which we found ourselves began, I noted in parentheses that Arendt was perhaps prompted to add, “heart and lung patients”, to clarify which of his compatriots were those designated by the Aktion T4. With this, he seemed to want to make clear that the Hitler operation went beyond races or ideologies and for this reason he had no contemplation to begin with the weak health and the elderly, what in these days of pandemic we have come to call vulnerable .

Associating vulnerability with the fact of being explicitly marked to die is something that cannot leave us cold. When vulnerability is not only marked by a congenital or unexpected disease, when, as statistics show, ethnic or social condition becomes an easy letter of access to such vulnerability, when opposition to a political regime, in the case of so many refugees, places people in a position to be pushed into that state of fragility and lack of protection, we can only think that Arendt’s words are nothing but a cry to wake up to what may be about to happen when the economic and social crisis caused by the Covid-19 manifests in its fullness.

Whether it’s the police shooting at children who disobey confinement in an informal East African slum, or the elderly who have died in their homes for fear of going to crowded health centers during the peak of the pandemic in southern Europe ; be they the dead in the face of despair caused by the loss of income that freedom of movement guaranteed the least, or the collateral deaths of the ongoing civil wars whose meager conditions further suffocate the current seclusion; Whether they are one or the other, what we cannot forget is that confinement, a measure whose implementation has quelled the outbreak of the pandemic, may also be in the hands not only of totalitarian authoritarianism, but of the social injustice that does not seem to have been not even the most democratic countries.

There are hardly any countries where well-founded accusations are not being brought up for the use and abuse of power that confinement allows. In this climate it is surprising to see demonstrations fueling conspiracies in Germany or allegations of mismanagement in Spain and Italy, when in India, Brazil, Russia, Turkey, Burma, the Philippines, not to mention the United States and China, the impact that confinement is having about their minorities and abuses of power are at the end of the street. The risks do not seem to come only from populist and authoritarian leaders but also from incontroverted officials and the complex state machinery of presumably democratic regimes.

Yes as Habermas said “The task of those who dedicate themselves to the profession of thought is to shed light on the crimes that were committed in the past and keep awareness of them awake”, then it is true that Arendt’s work may suffer peaks of attention before the possible repetition of crimes difficult to foresee or even to believe possible, but what should certainly keep alive in his work is the way in which even a brief passage of it is able to shake us to keep us alert that episodes like this do not happen again .