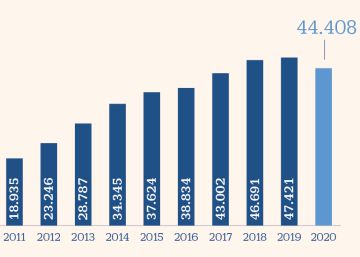 The coronavirus pandemic has triggered mortality in Spain, caused significant delays in the processing of documents and caused an unprecedented economic recession in peacetime. A cocktail that, according to notaries, will translate into a barrage of waivers of inheritance during 2021, which could break records, given the fear of the beneficiaries of receiving more debts and tax obligations than assets in the context of the crisis opened by the Covid-19 ..

“When there are economic crises, there are more waivers of inheritance. And from 2007 to 2019 they have been increasing ”, illustrates Concepción Barrio, vice-dean of the Notarial College of Madrid. Thus, while the number of acceptance of inheritances has barely oscillated between 260,000 and 320,000 per year, the number of rejections to them has multiplied by four in said period from 11,000 in 2017 to 47,421 in 2019, according to data from the General Council of Notaries. The figure has not stopped growing year after year, and it rose by 24% only in 2013. “The decisive factor is, logically, the principle of universal succession”, explains Ignacio Gomá Lanzón, notary of Madrid, for which “ the successors of a person receive the assets and also the liabilities, that is, their debts ”, which they must face with“ their own assets ”. “This combined with an economic crisis of the magnitude of that of 2007-2008 has made that, sometimes, receiving inheritances is receiving debts,” he adds. Two fundamental factors come into play here: the debts that he bequeaths themselves, usually larger the greater the depth of an economic crisis, and on the other, the payment of the inheritance tax and – when there is real estate involved – that of the municipal capital gain. A tax invoice that the beneficiary has six months to settle from the death of the beggar and that can be prohibitive for heirs without liquidity. “It may happen that in the inheritance there is a flat of great value, but if there is no liquid money you cannot pay the tax”, illustrates the vice dean of Madrid who clarifies that although regions like hers apply strong bonuses among direct relatives, this tax advantage it does not occur in all cases or in other regions.

The pandemic has also caused an excess of mortality of just over 80,000 people between March and December 2020, a period in which 391,400 deaths were registered, according to the National Institute of Statistics (INE). Despite this, the number of waivers of inheritance fell by 6.4% year-on-year in the year, its first decrease since 2007. In reality, the decrease occurred in all types of notarial documents, with a 3.8% drop in the signing of wills (despite the increase in interest in this figure found in the notaries due to the health emergency) to 616,561; and decreases of 7% in the acceptances of inheritances, to 297,948. The explanation is that “during the months of strict home confinement, urgent operations were prioritized, and those that were not were postponed, together with the fact that the autonomous communities adopted measures to extend the tax payment deadlines, which allows us to assume that many heirs they have left until later the decision to accept or repudiate the inheritance ”, clarifies Teresa Barea, dean of Andalusian notaries and national spokesperson for the branch.

“In 2021 there will be an increase in resignations,” says Barrio, although he leaves the figure to beat the 2019 record in the face of the possibility that a new total confinement will paralyze operations again. “This year the numbers will surely emerge that increase in mortality” of the pandemic, as well as “all operations that have been postponed in 2020”, so “if it seems that in 2021 we will have a significant number” of resignations to inheritances, agrees Barea.

The notaries consulted agree in pointing out, however, that there is a way to accept the inheritance without compromising one’s patrimony: acceptance for the benefit of inventory, which implies liquidating the liabilities of the will only with the assets it contains. Until 2015 that required going to court with a lawyer and attorney, but although since then it can be processed at the notary’s office at no greater cost than a usual one, barely 800 of them are sealed a year due to “ignorance”, say notaries, that it is possible accept an inheritance without bearing your debts.