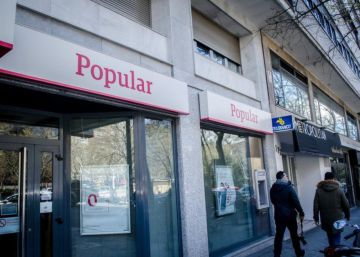 The demonstrations on the 2012 banking rescue of former Vice President of the European Commission, Joaquín Almunia, have fallen like a bomb in the financial media. On the tenth anniversary of the rescue fund (FROB), Almunia said: "In 2012 and 2013, Banco Popular ran away. Maybe it had not happened with a single European supervisor. I remember some analysis at the time to see if he had to go through restructuring and he did not do it because he could present a balance in a way that seemed better than it was. "

The concise words of the former European president, always very prudent in his comments, are of great importance to understand the roots of the financial crisis that has caused the most damage in our history. The first assessment is that it breaks the dogma, in an interesting way, that the financial crisis in Spain was a matter confined to savings banks. And that the causes of this behavior were due to the politicization of the boxes. It was a perfect way to throw balls out of the sector and not go to the bottom of the matter. We already knew that the banks were not oblivious to what happened as had been evident with the bailouts of Banco de Valencia and Banco Gallego, which required joint grants of over 6,500 million euros. We do not know yet what the Popular will cost us in the end.

The second observation of Almunia is even more relevant because it looks to the future. It refers to the deficit then existing due to the lack of a single European supervisor. A deficiency that continues dangerously today due to the inability to complete the banking union. Aristóbulo de Juan, the best expert in banking supervision, has reiterated his concern about the shortcomings of the European Central Bank (ECB), which oversees 90% of banking assets in Spain. De Juan is concerned that the ECB "seems to give in to the lobbies, tending to be the auditors who review the numbers, "as he warned a few months ago in this newspaper.

Any analysis of financial risks must adopt a European minimum perspective. These days we attend the tremendous crisis that the gigantic Deutsche Bank suffers, which in 2012 already specified a bad bank of 125,000 million euros to get rid of your garbage. Now he is preparing another similar one of 50,000 million, as he has pointed out Financial Times. This happens in a country where credit cooperatives and savings banks, which do not prioritize the search for benefits, are holding a large part of the financing of families and companies.

We will have to examine again the true causes of our crisis. The Bank of Spain has just warned that Spanish entities are the least creditworthy in Europe and recommends that they moderate the distribution of benefits. The old boxes, now converted into banks, spent more than 800 million last year on social projects. They should not be so bad.