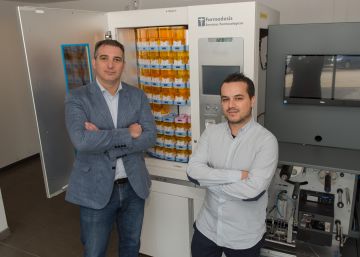 In virtue of the need for virtue, Asier Zubillaga, a 41-year-old Pamplona engineer, set out in 2011 to create a system with which to help his wife, a pharmacist, to provide treatments to socio-health centers. He came from the brick sector and in that year, “not one of the best for construction,” he says, began shaping it. Nine years later, the company, based in Palma de Mallorca, facilitates drug dosing systems to pharmacy Y hospitals in Spain and abroad, and invoices more than six million euros.

“My wife supplied the medication to some centers, and it was a job that was done by hand, it required a lot of staff and time; there was a possibility that there were mistakes, ”Zubillaga says by phone. That was when, along with his partner, Francisco García, he began to look for a more efficient solution. “There were things on the market, especially from Asia, but they were not adapted to European needs,” he says.

This is how Farmadosis was born and its custom dosing system (SPD), which, thanks to specific software and packaging machinery, groups the medications for each patient according to the prescribed guidelines. With their formula they not only wanted to optimize the management of pharmacies, but also to improve adherence to the treatment of users with more difficulties. For this they have also developed a mobile application that connects the patient and the medical-health team to monitor the shots.

They started from scratch, without reference: “One of the things that gave us courage is to have created something new, with nothing previous that would limit our ideas,” says Zubillaga. The first year they turned to the development of the initial versions and attended conferences where they met other pharmacists who wanted to collaborate with the project.

The company began to grow and a group of computer scientists joined the team. Two years later, the company was reinforced with more staff and began to market the product. “It was the need for pharmacies and the support of pharmacists that drove us,” says the Pamplona. He currently has 30 direct workers at the plant and more than half a hundred in total.

Being practically the only ones that offered this type of solutions, they were done with a remarkable market share in Spain. “There were blister packs and cardboard to fill by hand, but there was no global computerized solution like ours, and that made us grow at a good pace for two more years,” says Zubillaga. At first they imported machines that they later adapted, but after the first four years they made the leap to make them themselves in Asia. At present, they already have a factory in Villena (Alicante), and one of their main objectives is to bring all the manufacturing to Spain.

When they were already settled in the national market, they opened up to new horizons. Today they are present in more than 25 countries: from Australia to Colombia, through Germany, Saudi Arabia and China, among others.

Moving from Spanish to international was a new challenge. The main one, adapt to other types of customers. “In Spain we worked mostly with street pharmacies. But in the rest of the world it is the hospital pharmacies that facilitate the medication, ”says Zubillaga. And they had to research and adapt their products to a volume of around 15,000 patients.

For those responsible for Pharmadosis, continuing to innovate constantly is a necessity and that is why they allocate almost all of the benefits, 80%, to the R&D department. After subtracting this item, in 2018 they declared a net result of 200,000 euros and estimate that 2019 will be around 300,000 euros.

The key to the company’s success, according to its founder, lies in the support received from its customers. He says that they have barely invested in advertising and marketing in all these years, that their best ambassadors have been the professionals who have trusted them and shared their experiences.

Reaching their current position has not been easy and, although they encountered many difficulties, they never thought of leaving. “This project excites us all and has cost us a lot of sacrifice, but it has also given us many joys,” says Zubillaga. “We have driven it with our own assets and, although they have offered it to us, we have not wanted to open up to other companies.”