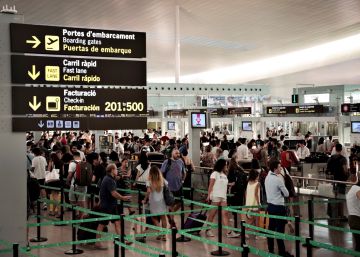 El Prat airport has registered the first lines, up to an hour in Terminal 2, on Friday morning security checks indefinite strike that since this midnight the vigilantes of the Airport of Barcelona carry out. The situation in terminal 1 is fluid and normal and travelers, many of whom have arrived in advance, have to queue about 20 minutes to pass control. The Government Delegation in Catalonia has decreed minimum services of 90% for this strike, although the committee has already warned that they can hardly be met, as there are many workers on leave or on vacation. “The minimum services of 90% are being fulfilled” and the workers are not being replaced, ”said Pilar Albacete, director of human resources at Trablisa, the company that has been in charge of El Prat's security controls since 2018.

The flow of travelers to the entrance gates for the controls has been intensifying from 9 in the morning, although more rows have been enabled and that has allowed a situation of certain normality in the middle of August. It is estimated that about 185,000 people will pass through the Catalan airport. “The flight is at 12 and I had to come at 9 just in case,” explains Marina Benete, a young woman from Barcelona who travels to Las Palmas. "I heard about the strike by my grandmother, Vueling has not informed me of anything," he adds. Where there have been problems early in the morning it has been at terminal 2 of the airport, with queues of up to an hour. He has also arrived in advance at Javier Canales airport, which travels with Vueling, along with three other friends to Berlin. "The airline notified me yesterday by SMS and by email," says the boy.

The president of the Trablisa company committee, Genoveva Sierra, has assured that "it is practically impossible" for the vigilante strike "to be noticed", since the minimum services decreed are 90%. In statements to the press from the airport, Sierra said that with these minimum services so high, workers can only follow the strike "morally, while carrying luggage." Sierra has denounced that a group of seven employees who had not received the minimum service letter have come to the airport to confirm that they should not work and "have tried to force them" to do so. For its part, the human resources director of Trablisa has denied it, but has said that they are communicating to the guards the shifts they have assigned for the next few days to be an indefinite strike.

Trablisa's staff decided yesterday by a large majority, with 175 votes in favor and only two against, going on strike to demand salary and labor improvements, after the mediation meetings between companies and unions failed. From 00:00 hours on Friday, about 500 Trablisa employees go on a 24-hour strike on an indefinite basis. Is the second stop that the Barcelona airport lives in less than two weeks, after the protest that the Iberia land personnel starred at the end of July.

The situation, however, could be complicated throughout the day, taking into account that El Prat is in the middle of the summer season and that a thousand flights are scheduled for this Friday alone. Both AENA and the airlines have recommended travelers to go to the airport in advance, as this labor dispute can increase waiting times to pass security control. And so many users have done it, although they had scheduled flights early in the morning they have decided to spend the night at the airport terminals to avoid boarding problems.

Two years ago, in the summer of 2017, workers at the El Prat security controls, then under the umbrella of the company Eulen, seconded a strike that caused serious problems in the operation of the airport and ended with a binding arbitration award fulfillment.