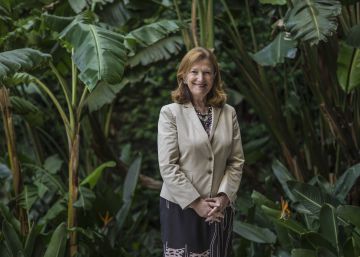 Nora Lustig (Buenos Aires, 1951) is one of the Latin American economists most prominent today. His career has always run on three lanes: development, inequality and poverty, branches he reached, by simple observation, when his family moved to the United States in the sixties. "I noticed a great leap in the standard of living," he explains as he rushes a bottle of sparkling water in a hotel in southern Mexico City. And he began to ask himself: “It was a time when the study of income distribution was far from fashionable. Inequality was still associated with being a communist or radical leftist. Not anymore: it has totally gentrified, the discipline has been transformed and is everywhere ”, explains the professor of Latin American Economics of the University of Tulane (New Orleans) and president emeritus of the Association of Economics of Latin America and the Caribbean ( Lacea).

Question. That the study of inequality has passed from niche economic discipline to occupy a central place is a victory in itself.

Reply. It is tremendous. I think there are two factors behind: the fall of the Berlin wall, which ended the struggle between capitalism and communism and broke economic taboos; and the concern for the growth of inequality In U.S.A. We already know that when something happens in the United States, it becomes of global impact … It was then that many famous economists, of neoclassical tradition and not only Marxists, began to write on the subject.

Q. And he began to permeate in multilateral organizations, something unthinkable until then.

R. Until the mid-1990s, not even the World Bank mentioned the word inequality and the IMF saw it as an internal policy issue: it was only interested in stability. Since 2000 there has been a radical change and now the word inequality is now continuously present. The Fund also rethought its position: now they are aware that it is an impediment to stability and growth.

P. For the attention of the general public to focus on inequality, however, we had to wait until the global financial crisis.

R. It is probable. Thomas Piketty, for example, started studying what happens in 1% of the distributive cap in 2003 or 2004. Also Atkinson, Bourguignon … But nobody knew them. Then there was a very strong change and today nobody looks bad for studying inequality. On the contrary: it generates interest.

Q. Why is Latin America still the most unequal region in the world?

R. In reality, it now competes with Africa in terms of inequality. And that is a novelty. The most interesting of the recent period in Latin America, from the early 2000s to 2012, has been the decline in inequality: until then, the only episode that recorded a fall in a group of countries and for a long period had been the postwar period. of World War II. It has been an atypical phenomenon: it fell at a time when in other parts of the world it rose.

P. What can be attributed to that fall?

R. The structural part was the educational improvement in the nineties and its effect on the labor market; also the turn in social policy, with an increase in transfers to the poorest groups. The short term was the rise of raw materials in the 2000s, which led to an increase in less skilled labor and the rise of leftist governments.

Q. What did Left Executives change in the region?

R. His great contribution was the minimum wage: he grew much more than in the countries governed by the center or the center-right, with or without a boom in raw materials. That is the policy that most distinguishes left and right governments: ideology does not define (social) transfers, but the increase in the real minimum wage. It is a very interesting difference.

R. The end of the boom in raw materials and, with it, the depletion of the room for maneuver (fiscal) in many countries for transfers. In addition, the educational effect was diluted. In some, such as Brazil or Mexico, inequality begins to rise and in others it simply stops falling.

Q. The region, with the only exception of Mexico, has turned right: Brazil, Colombia, Chile … What effect can it have on inequality?

R. I don't know, it's too soon to know. The (social) transfers were adopted in a general way, not only by left-wing governments. And the investment in education is not something unique on the left. Where there is going to be a dichotomy is, again, in the minimum wage: there will be greater reluctance to increases.

Q. Why do tax systems correct inequality so little?

R. It depends on what it compares to. Trying to compare Latin America with Europe is a false comparison: it is necessary to compare how much the countries that are advanced today were corrected when they had similar incomes to today's developing countries. And what we have found is that some Latin American countries spend more on health more than Europe or the US spent when they had an equivalent level of income. However, one of the important restrictions is tax collection: income and wealth taxes to those who are at the top of the tax scale and to companies are well below what they should.

Q. What can be done?

R. We must talk more about circumvention, evasion, exemptions, effective rates – which are much lower than the real ones – and, in general, how to generate more revenue from powerful sectors. And, very important, we must ask ourselves from what level of income the citizen should be a net payer: if we believe that the poverty line makes any sense, those below it should not be.

Q. The big tax problem is in the income.

R. Yes, largely because of the resistance of the elites: that is where the original inequality creates a brake to correct the current inequality. The systems should be much more progressive, especially through direct taxes. There is much to do, starting with inheritance taxes, which in Latin America are practically non-existent and should be an important piece to break the vicious circle of inequality, which is creating elite dynasties that capture the State.

Q. Why this refusal to tax inheritances?

R. Again, by the resistance of the sectors that would be affected. But it is fundamental: it would have a collection, redistributive impact and create more equitable rules of the game in society.

P. The discourse of fiscal allergy has practically penetrated all over the world: a current of thought has been imposed that tries to reduce taxes at all costs.

R. I don't know why so deep, really. But it is a battle to be given. The market will not create, on its own, more equitable societies: on the contrary, with the technological change more inequalities will be created and mechanisms will have to be put in place so that people who no longer have jobs, at least have access to income .

P. I do not like to be considered as always. A basic income or any other universalized mechanism implies that you will give less to those below. If you can direct resources on social groups or the poorest regions, you will have much more impact on poverty reduction. I prefer to give more money to the poor, increase progressivity and that public services are public, universal and of good quality.

Q. And in a context of technological change, especially in industrialized countries?

R. Yes, it can be, in advanced and more equitable countries. But when you have many poor people, the cost is that you will give them less. And, for me, the poor go first.

The Canadian economy contracted 7.2% in March on the COVID-19

The IMF approves a credit line for Chile for 23.930 million dollars