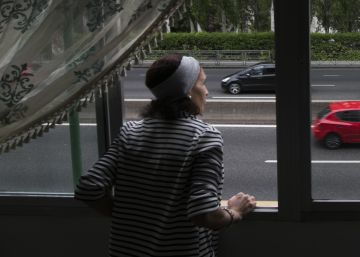 Pollution kills. Pollution kills It does that which forms an orange beret over the cities and another that is not seen, but it is heard. The noise causes 16,600 premature deaths in Europe and 72,000 hospitalizations a year, according to the European Environment Agency. The main culprit is road traffic, the first culprit also for the emission of gases that poison the air that cause 10,000 premature deaths in Spain a year, according to the World Health Organization (WHO).

Cardiovascular diseases, hypertension, sleep disorder, poor performance, cognitive impairment, tinnitus or deafness, are diseases with which noise pollution is directly and clearly related. Some research also points out that some problems of pregnancy, obesity and diabetes are also associated with excessive noise, something that almost half of Europeans suffer during the day and about a third at night.

As with air pollution, it is impossible to determine in individual cases when the ailments are specifically due to noise, since they are usually multifactorial. To draw their conclusions, scientists rely on epidemiological analyzes of large populations; But when prolonged exposure is mixed with certain symptoms in a person, it is not uncommon for noise pollution to play an important role.

Alex Mas’s insomnia problems came when he moved to Plaza del Sol, in Barcelona. “I slept all my life like a log. Since I’m here, that changed, and it made me ‘click’; I can’t even sleep well anymore, ”says this neighbor from a nightlife and bottle area, one of the 13 million Europeans who suffer from sleep disorders due to excessive sound. “From there, it joins a very intense work and I have developed stress and anxiety,” he says.

The mechanisms by which noise pollution affects health are becoming increasingly known. Julio Díaz, head of the Department of Epidemiology of the National School of Health of the Carlos III Health Institute, explains that the body lives the noise as an aggression: “What you are looking for is to repel it, so it is necessary that the muscles have energy, for which increases blood pressure and heart rate, so that more oxygen reaches them. ” This would be the origin of heart problems and hypertension. “More glucose is also generated to provide energy, but as it is a fictional aggression, it is not really eliminated.” This, says Díaz, would explain the relationship with diabetes and obesity. “On the other hand, for all this to work, cortisol is needed. There are studies that show that high levels of this substance lower the immune system. Thus, a controlled infection can cease to be, ”says the expert to show the relationship of noise with respiratory diseases. To support this thesis, he uses research such as one that examined a child in a noisy and a silent room. The cortisol of the first in saliva was much higher than in another. “This has a clear impact on health,” concludes Diaz.

The World Health Organization (WHO) published in October 2018 about new noise guide reviewing all the scientific literature, which lowered the exposure thresholds that he considers safe. It recommends reducing levels below 53 decibels during the day and 45 at night for road traffic, the most common source. “The problem in Spain is that it does not have long-term studies,” explains the Carlos III researcher. His team has done several short films in Madrid, which show that after peak exposure they increase hospital admissions similar to what the gases from the combustion of vehicles do. “We verify that they increase due to circulatory and respiratory causes in the year 2000; then, in 2007, which produced more income in children, especially for pneumonia. And, in 2014, we ratify that it is capable of producing more income from cardiovascular impacts and diabetes, we will see if it also causes deaths, ”he emphasizes. To reach these conclusions, noise measurements are compared with hospital records.

María Foraster, one of the authors of the WHO guide and researcher at the ISGlobal health institute, funded by the LaCaixa Foundation, explains that we are at a time when figures can evolve with new studies. They can be made after analyzing the noise maps that municipalities with more than 100,000 inhabitants have to publish every five years. The expert says that reducing noise morbidity necessarily involves reducing traffic in cities: “It is a double benefit, because it also stops air pollution.”

“The ideal is to plan cities in which it is not urbanized near the streets where vehicles pass, which have spaces of tranquility. In those that are already made, you can put barriers, which are advisable natural, that have more benefits, but it is not always easy, ”says Foraster. In his opinion, measures such as restricting traffic by zones are another positive path. “Central Madrid would be a good proposal. OR the superblocks of Barcelona“, Add.

This urban initiative consists of cutting whole apples to the circulation, or restricting them to the maximum, so that only residents can pass, while gaining space for other equipment, such as sports courts or recreational areas. An ISGlobal study in Barcelona He estimated that the city could save up to 20 million euros annually in health care with this type of infrastructure.

In the Plaza del Sol, where Alex Mas lives, the communities of owners have been complaining about the noise for years. The organization Ideas For Change He made a pilot to measure noise pollution and find solutions. After studying the situation, they proposed four: install planters on the steps where more people gathered to prevent so many people from gathering, thus reducing the sound they emit; create a playground to encourage other use of space; increase the performance of the urban guard; and improve signage and information about the inconvenience caused by nightlife there. The new measurements that determine how successful these initiatives have been have not yet been published. But the neighbors, they say, continue to lose sleep because of the noise. Probably also health.

Exposure to noise in Europe:

WHO recommendations on noise exposure:

Noise caused by leisure: less than 70 dB of exposure.

Ramón Reyes: "Cancer is a time bomb that will explode in our faces when the pandemic ends"