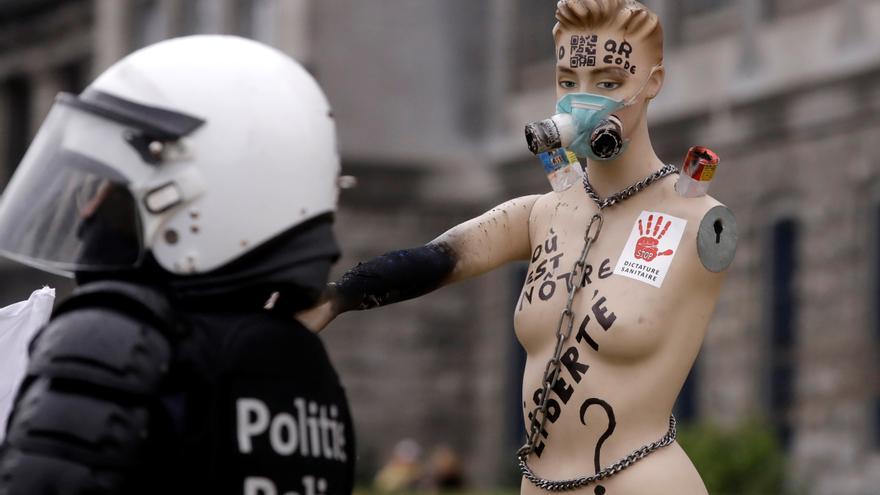 Has the rebellion turned to the right? With this suggestive title, the Argentine historian Pablo Stefanoni addresses in his most recent book one of the most interesting political debates of the moment: the possibility that the left has given up its anti-establishment tradition, its ability to confront the powers and the political order. established, and has ceded that transgressive role to the right. Or, at least, to the most radical wing of it, which is what finally emerges from reading the text.

Stefanoni focuses on the rise of a new right whose leaders "are no longer skinheads or wear boots or swastikas tattooed on their bodies", but are considered "respectable" figures in the political game, thanks to a process of 'normalization' that has been facilitated to a large extent by the passivity, political opportunism or weakness of the conventional parties, particularly the conservatives. But the author does not stop at the discussion about this whitening, an issue that has been dealt with profusely by prestigious experts in the field, with the Dutch political scientist Cas Mudde at the helm. The originality of Has the rebellion turned to the right? (Siglo XXI) is based on the fact that, based on a rigorous reading of the referents of the extreme right and the alternative right, it meticulously dissects the discursive structure that today allows these ideological currents to present themselves as a groundbreaking phenomenon, without complexes or taboos, willing to turn upside down a pernicious order imposed by the 'progressive' elites, as they call an imprecise magma of powerful people among whom they invariably bring up the name of the Jewish tycoon and philanthropist of progressive initiatives George Soros, who would embody the capitalist predator par excellence .

Great figures of libertarianism parade through the pages of the book, such as the economist Ludwig Von Mises or the philosopher Ayn Rand; media stars of alt-right, such as Milos Yiannopoulos, and a whole host of vociferous provocateurs of the caliber of white supremacist Richard Spencer or the 'masculinist' Jack Donovan. In my opinion, the key figure in this hodgepodge of influences is Murray Newton Rothbard, a disciple of Von Mises, who in the early 1990s left the Libertarian Party and built a bridge between the libertarian tradition and old American conservatism, laying the foundations of the right-wing populism as we understand it today. It is no coincidence that the book devotes a generous space to this influential economist.

As Stefanoni rightly points out, the discourse of the new right today poses a serious challenge to the left, to the extent that it contains claims and approaches that, without proper contextualization, could be confused in some cases with classic banners of progressivism. The extreme right, for example, not only proclaims itself a defender of the popular classes against the abuses of the rich, but has also begun to experiment with certain ecological rhetoric and even winks —in some countries with more determination than in others— to the collective homosexual. But his favorite scenario to show off his rebellion is that of the "cultural war". According to his account, the left lost the battle over the economic model with the collapse of Soviet communism, but has managed to win the battle over culture to this day. The maximum expression of that victory would be "political correctness", as it contemptuously calls what have been, yes, authentic rebellions from the left against the established order, such as the fight for women's equality and the defense of the rights of minorities, and whom it tries to disqualify as a whole for the excesses that may have been committed in its name. Under that label, he groups everything he dislikes about progressivism: from inclusive language to feminism, going through multiculturalism, "gender ideology" or sensitivity towards immigration. To confront the "new Inquisition", the great ideological family to which Vox belongs has proudly proclaimed itself the standard-bearer of "political incorrectness".

It is obvious, for anyone who takes the trouble to delve into the roots of the thinking of the extreme right and the alternative right, that the discourse of this ideological conglomerate is built on very different values ​​from those that have traditionally animated the left. Thus, the defense of the popular classes goes in the same package as the rejection of immigration, which is accused of taking jobs away from nationals. Criticism of globalization is framed in an ethnonationalist project of society, alien to the internationalism that has characterized progressivism. The same could be said of the recent and perhaps opportunistic concern for ecology, which Stefanoni associates in some way with "ecofascism", a form of idealization of life in nature that Nazism and fascism borrowed from German romanticism and that has little to do with scientific bets for the protection of the environment or the concern for global warming. The calculated opening to the gay world is made from a "homonationalist" perspective, as it is part of the fight against the hated Islam, a religion that is identified with homophobia and intolerance. And "political incorrectness" ends up being revealed as an instrument "to enable racism, sexism, and political and cultural intolerance."

It cannot be denied that this discourse is becoming attractive to many, especially to popular sectors hit by economic difficulties and uncertainty, in a context of weak democracy and discredit of traditional politics. "We are facing right-wing groups that compete with the left for the ability to be outraged at reality and to offer ways to transform it," warns Stefanoni. And he observes: "The 'anti-systemic' left wing has embraced representative democracy and the welfare state or has been transformed into small groups without effective influence; meanwhile, it is the so-called 'alternative right wing' that has been playing the radical card against the elites , the establishment politician and the system.

The book exposes some of the difficulties facing the left in the face of the rise of the extreme right and the powerful impact of its discourse on political debate: How to defend secularism without falling into Islamophobia? How to disarm the xenophobic arguments against immigration with convincing data and without falling into easily refutable positions? How to support a communitarian idea of ​​society without giving up cosmopolitanism and without adopting a culture of the terroir that could turn out to be reactionary? Added to this are doubts about what is the proper way to deal with the 'politically incorrect' rights. According to Stefanoni, the feeling that prevails today among progressives is that, if they debate with them, they lose out; if they ignore them, they continue to rise; and if they attack them, they victimize themselves. One of the usual complaints from the left is that the ultras have it easier because they openly resort to demagoguery and lies. To this the author responds crudely: "It is also true that progressivism remained comfortable waging its battle 'in culture', in its moral comfort zones and in its adaptation to a more hipster". And he adds: "This does not mean, in any way, that the left cannot continue winning elections; means that may very little when they win them".

In the epilogue, the historian proposes a very unique formula to deal with such a skillful and brazen enemy: humor. Mock the alternative rights that are presented as victims of political correctness. "Maybe it's time to ridicule the ridiculers," he proclaims. However, he immediately adds that this offensive must be accompanied by a renewal of progressivism, which allows it to reconnect "with those below" and articulate the demands of an atomized and diverse society. That is precisely the crux of the problem. How to recover the capacity for rebellion that at other times identified the left. In my opinion, this is a much more difficult challenge than making fun of Abascal or Trump. Which does not mean, far from it, that it underestimates the combative potential of humor.