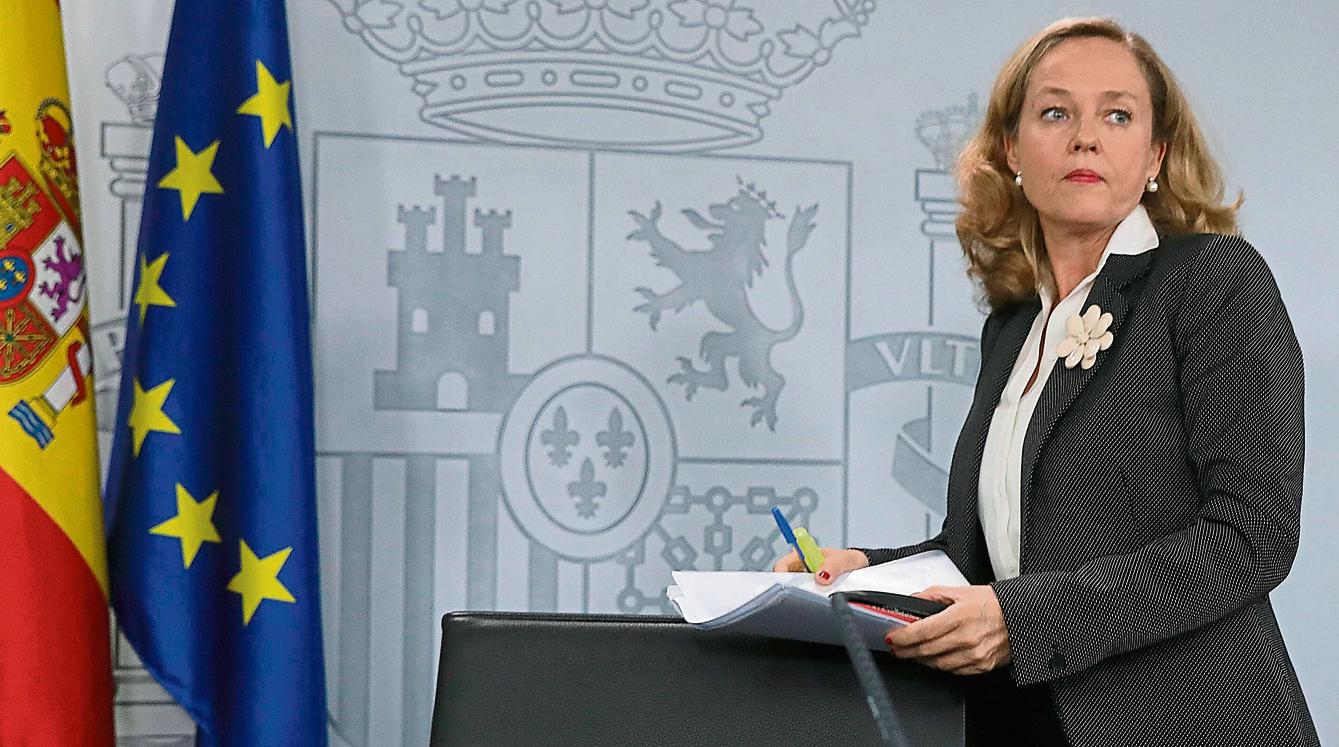 To negotiate with Brussels, it's hard to find someone more suitable than Nadia
Calviño. This was probably one of the reasons why Sánchez chose her for the Economy portfolio, which she has to deal with the European Commission. Calviño is one of his own. Know the house and the house knows her. Yes after 10-N rules the PSOE, Calviño will continue to minister, Sánchez dixit , and you will find a more difficult economic context. He wants to combine austerity and social policies, denies the Laffer curve and regrets the economic damages of the lack of government and social and political tensions in Catalunya. The interview was conducted right after France Y Spain they were able to carry out a (modest) budget for the euro zone.

“The situation is very different; we don't have the vulnerability of that moment ”

Growth in Europe and in Spain is slowing. The international situation is worrisome. With this panorama, are we approaching a recession?

This week, at the meeting of EU finance ministers, it has been confirmed that the euro zone continues to grow, although at a slower pace. That is why there is increasing agreement about the need for fiscal policy to accompany monetary policy and be able to boost economic growth. Spain is weathering the current international context better than other countries, but it is clear that part of the risks we had identified in the past few months are materializing and there are others that still generate uncertainty, particularly Brexit. Our economy is very open and cannot be isolated from developments that occur in the international environment.

In 2008 there were many resistances to use the word crisis, but the crisis arrived and was devastating. Is there a risk of suffering a similar crisis?

No one can anticipate a crisis in the international arena, but what is clear is that the economic situation of our country is very different from what we had in 2008. We do not have the vulnerability at that time, caused by the huge imbalances that We had accumulated, like the existence of a bubble in the real estate market, the huge deficit of the current account balance of payments, the enormous leverage of companies and families. At this moment we have an economy that grows in a more sustainable and balanced way, with a surplus in the current account balance of payments, a much lower level of indebtedness by families and businesses and in an environment of interest rates more favorable to the financial and growth stability. Therefore, I believe that we are better prepared to face challenges that may arise in the international arena, which does not mean, as I have indicated, that we can totally isolate ourselves.

Specifying more, is there a risk of crisis in Spain?

No one sees at this time a risk of crisis in the euro zone or of course in Spain and even less an episode comparable to what we live in the period 2008-2013.

But Germany is about to go into recession.

The German economy is in a situation of very weak growth but with full employment, a large margin of action in the fiscal field and recovery forecasts for next year. What we have seen in the last year is that, despite the slowdown in international trade, the Spanish economy has continued to gain competitiveness, market shares and our foreign sector has continued to have a positive contribution to economic growth.

Before Tuesday, you must send the draft budget plan to the European Commission. Will it include a 2.2% growth target reduction for this year?

We are awaiting the validation of the Independent Authority of Fiscal Responsibility (Airef) to be able to finish it and send it to Brussels. Of course we will have to take into account all the developments that have occurred since we made the last frame in spring, in particular the statistical review that the INE has carried out.

What impact is the lack of government having on the Spanish economy?

Undoubtedly, stability favors economic growth. That is why I have been pointing out the need for government to be formed as soon as possible, with a four-year perspective to address the reform and investment program that our country needs and to send a clear message to investors about our priorities. The Spanish economy would be having even greater growth if we were able to eliminate uncertainty factors.

Has Brussels transferred concern about this instability?

They have not transmitted any concern to me. Obviously there is interest in the situation of a country like Spain, but I have not detected concern. Keep in mind that, of the big countries in the euro zone, Spain is the one that is showing the greatest vigor and a more dynamic growth rate.

What consequences in the economy can have the sentence on the process and its repercussions in Catalonia?

As I have noted before, social, political and economic stability creates a favorable investment environment. In the last year there has been a clear improvement in the political and social climate in Catalonia. It has not been possible to solve the problems of coexistence, but on the part of the Government we have made a great effort to, on the basis of the law and the dialogue, try to improve the situation. I trust that society will continue to show maturity and that we can continue to improve the political climate and, thereby, favor investment and growth.

What economic impact has the process as a whole had?

It is clear that Catalonia would have had greater economic performance if we had not had in recent years the situation of social tension and legal and political uncertainty caused by the process. This has not prevented Spain from having a very remarkable economic growth in this period, but I think that, given the weight of that of the Catalan economy, we think that our performance would have been even better. As a minister, I wish the Catalan economy to do its best. From a more personal point of view, I have developed a large part of my career in the international arena and I think that has given me a certain perspective on our country and its role in the world. I believe that, in an increasingly complex world scenario, we must join forces and build on what unites us to meet the challenges. As a Spaniard, I don't understand myself without Catalonia.

Is the pension update promised by Pedro Sánchez acceptable?

To maintain this balance it will be necessary to raise taxes.

I don't think there is any government whose priority is to raise taxes. They are very unpopular measures. At the same time, a responsible government must ensure that it has a fiscal structure that is sound and fair, as progressive as possible. Along these lines, we propose tax reforms to modernize the system and strengthen progressivity, such as large companies paying more than small companies and making life easier for the self-employed who have lower incomes, for example.

I see that you don't believe in the Laffer curve.

This type of recipes that promise that lowering taxes increases revenue collide with rationality and reality. What we have seen is that with the tax reforms that reduced the tax rates, revenue dropped, as expected. That is why I have pointed out so clearly that we have to flee from those political parties whose only recipe for economic policy is to lower taxes by saying that this way all problems are solved miraculously.

You declare yourself very satisfied with the approval of the budget for the euro, but with 17,000 million euros it seems rather a mini-budget.

The most important thing is to move in the right direction. From the beginning, Spain maintained that a specific instrument for the euro zone with countercyclical elements that allowed a certain stabilization element was necessary. From that point of view, the agreement is tremendously satisfactory, it is an important step to create that instrument and also includes the possibility of increasing its amount.

Regarding European unemployment insurance, are you still preaching in the desert?

It is not the first time that I have a mission that seems impossible and that, however, is gradually becoming a reality. 16 months ago Spain was practically alone defending a powerful stabilization instrument that reinforced national fiscal stabilizers, especially in the protection of the unemployed. I see that there are more and more voices that join ours, including the elected president of the Commission, Ursula von der Leyen, has pledged to propose a European unemployment reinsurance mechanism.