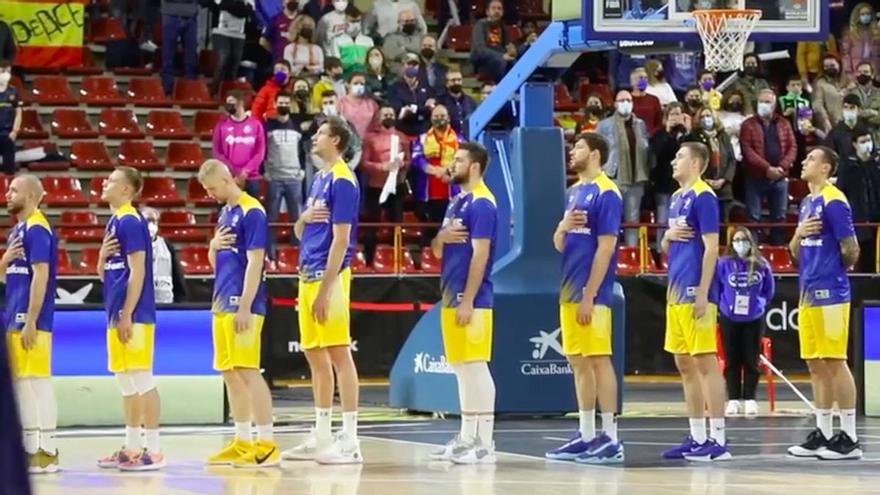 There was both feeling and questions in the air at the Vista Alegre Sports Palace of Cordoba. Why was a basketball game held with the presence of a team from a country that had suffered a military invasion just a few hours before? Beyond regulations, the response has an emotional basis. "We want to send a message to our people," they insisted with forced enthusiasm from the ranks of Ukraine, who visited this sports venue for the second time in its history. The first was in 1993, with two years as an independent nation, and in the second it was under the shock of the outbreak of a war of incalculable consequences.

"No war" was the message written on the faces of some Ukrainian players, who decided to go out on the court to compete despite the evident state of unease that was detected in the group. His banner, the 2'16 giant Artem Pustovyi, He showed a gesture of extreme emotion at the moment when the anthem of his country was playing. The current Herbalife Gran Canaria player -and former Obradoiro and Barça player- was as extra-motivated as his teammates. After a heartbreaking minute of silence, during which Pau Casals' Birdsong was played, Ukraine came out unleashed. Pustovyi and Rendl, a naturalized American, made the first baskets. There was applause in the stands, who empathized with some players who were sporting rivals but also men scared for the future of their own. They call the Spanish team 'La Familia'. Also for this.

Artem Pustovyi, emotional while listening to the anthem of Ukraine. RAFA ALCAIDE

The latest events conditioned what had been designed as a full-fledged party in Córdoba, a city to which the national team returned after 16 years. The most recent visit was in 2006 and on that hot afternoon in July - a friendly against China resolved with a beating from the ÑBA - they performed for the first time together with the national team the gasol brothers. Now a new generation is being sought, in which some of the young talents are already emerging -Pradilla, Joel Parra, Yankuba Sima...- that Sergio Scariolo recruited to pave the way for the final phase of the World Championship next year. To spice up the ceremony, a tribute: the one who received Philip Reyes, record man with Spain and Real Madrid, Spanish sports legend and native of Córdoba. The idyllic setting turned upside down.

📹 The values ​​of sport are EVERYTHING ❤️#The family #We are a team pic.twitter.com/e9r2TxtZYg

The Russian invasion suddenly turned a basketball team into a group of compatriots anguished by the news that arrived from their country. Few could sleep. The night was tense in the central Cordoba hotel where the Ukrainian expedition has been staying since last Monday, which continued its work routine trying to abstract itself from a situation that was heading towards the limit. "We are professional athletes and we come to play a basketball game, we don't want to talk about politics," said Ukraine's coach, Latvian Ainars Bagatskis, when the tense situation had not yet led to the dramatic episode of the Russian military intervention in different cities. The images of the explosions and the exit of military vehicles in the streets ran through social networks. Four thousand kilometers from their homes, the players received the impact. "They are discouraged, trying to contact their families to see if everything is going well," explained the expedition manager, Andrei Lebedev, after the suspension of training to the swarm of journalists who were stationed at the hotel doors. There they rested -or tried- during a concentration in Córdoba that they will never forget. ANDn Vista Alegre played the most difficult game of their lives.

Many did not know how they were going to return to their country, as all flights were cancelled. "We have children there, we will return by bus or on foot"said Lebedev, the Ukrainian manager. The players did not take off their mobile phones and looked at each other with anguish. That the basketball, his work tool, fall from his hands to make way for a weapon now flies over as a grim possibility between the components of Ukraine, the selection of a country at war.