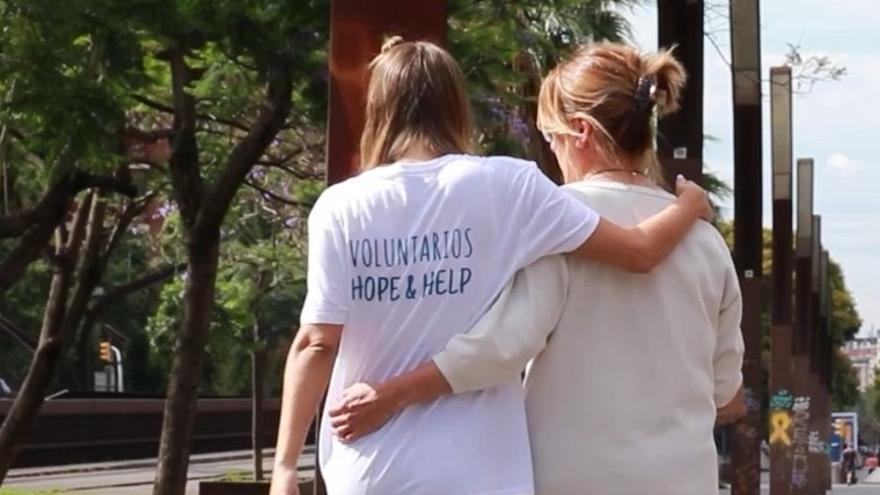 It causes us great sadness to see people in vulnerable situations and suffering for what they love most, for their family animal. People who, due to situations that often occur, are on the edge of losing their faithful friend and do not know who to turn to. Public administrations do not cover that gap that exists between a person and that part of their family, there is no one who preserves that wonderful bond. They work separately, entities that take care of the person and entities that take care of that person’s dog or cat, but no entity takes care that this bond is not broken when there is a situation that puts that relationship at risk.

That is why Hope & Help was created, a non-profit foundation that takes care of the bond between people and animals that are part of their family in many different ways. On the other hand, we are surprised to see how it works, through interventions with an animal, for the benefit of people, how much is said about the benefits that an animal brings us, but instead, when a problem occurs Many times it is chosen to withdraw the animal and leave the person without that faithful friend who gives everything and does so much good.

In parallel, there are many animals in kennels that could end with many depressions, could help people with mental health problems, could help to overcome addictions or not fall into them, and, above all, could end the loneliness of older people and not so old.

Hope & Help works to preserve that bond, that valuable friendship relationship, and to avoid the grief of forced separation. It also works so that the animal is the motivating axis of many people in the rehabilitation and socialization phase. They say that a picture is worth a thousand words and an example can better explain any speech. So, let’s explain with examples what the HOPE & HELP FOUNDATION.

Imagine for a moment the following situation of the ‘Bella Vella Ánima’ project: Mrs. Montse has serious mobility difficulties and is in charge of Nino, her faithful furry companion. The dog has not been out on the street for weeks, even months. Montse despairs when she sees that her Nino cannot even relieve himself outside and does it for him in a newspaper (hopefully). Social services have provided a caretaker who comes for a few hours and takes care of Montse, but neglects the dog since it is not her job and she does not have time to attend to him either. Nino is becoming more and more nervous and anxious, and the coexistence between them becomes more and more difficult. Montse loves Nino madly, since they have been together for more than 12 years, and she fears that they may make the decision to withdraw Nino and that he will end up in a kennel. Montse begins to be very worried and sad.

In that situation, Hope & Help volunteers organize to help Montse. They take Nino for a walk, to run and let off steam, to visit the vet (who hasn’t visited in a long time), or to have him look handsome at the dog groomer. Nino returns home happy and just wants to snuggle peacefully next to Montse. In addition, the volunteers encouraged Montse to go for a walk, to give her some fresh air, and they had a happy and relaxed chat. If Montse has ever needed it, the volunteer has made the purchase for her. When Montse has been admitted to the hospital for a few days, Nino has spent those days in a foster home as if it were a vacation, with everything paid for. Montse’s tranquility of knowing that Nino is well cared for and that when she returns home she will meet him again, gives her the strength to recover quickly. Montse no longer feels alone.

Another project is ‘Ànimes bessones’ (Twin souls): Javier is a boy with mental health problems and difficulties in his integration into society. Those in charge of the center that accompany Javier have considered that volunteering at Hope & Help can be very useful to help him in the socialization process, increase his self-esteem and autonomy.

We offer you to be part of the volunteer team and to help us walk dogs of people who cannot, like Montse’s dog. On the other hand, we have David, a support volunteer who will help Javier in everything, he will teach him until he can be autonomous and can take care of the animals, by himself. He will be by your side throughout the process, in the same way as the Hope & Help team. We can attest that during this time Javier has increased his self-esteem, he feels useful in society, he feels integrated and happy to be able to help.

With these projects, the loneliness of many people, the isolation of many others, the abandonment or neglect of animals is avoided, the integration into society of people at risk of social exclusion, people with addictions, people who have suffered and suffer gender violence. In all cases, the animal is the motivating axis to achieve well-being and a better society.

We have also given and do support many people in time of COVID. Through the Support to the Quarantenes of the Generalitat de Catalunya we have ensured that many people do not have to suffer for not being able to take their pets for a walk while their confinement lasts.

Hope & Help has been around for almost two years and fortunately they are getting to know us and considering a tool to take into account in public administrations and private entities. But to grow more, we need the contributions of generous people and companies who believe in our projects and help us cover the expenses that occur, both at the veterinary and administrative level. We have received grants from the Barcelona City Council and the Diputació, and from private companies, but they are not enough to cover all expenses.

Our team is made up of five people at the foot of the canyon, willing to organize, manage, help and give everything, and even though we are overflowing with work, we are extremely excited and motivated to save links and create new ones where we existed. A volunteer told us that thanks to that work she now has “another granny and many dogs”, because the bond is also created with the people we serve and with the animals we help.

We remember with special affection the case of a married couple who had been evicted from their home. They were offered to go live, while the administrations looked for a new home, in an apartment that did not allow animals, so we took care of their dog in a foster home. They showed us that love for an animal can be very great, since they preferred to settle for long months in a small room in a boarding house, where they did allow dogs, and thus be next to the most loved one, their dog.

This and many cases that we have attended, show us how great is the love for animals and the benefits that they can bring to people. In our actions, everyone wins. The person we serve, the volunteer and the animal. Hope and Help is our motto, because where there is help, there is hope.