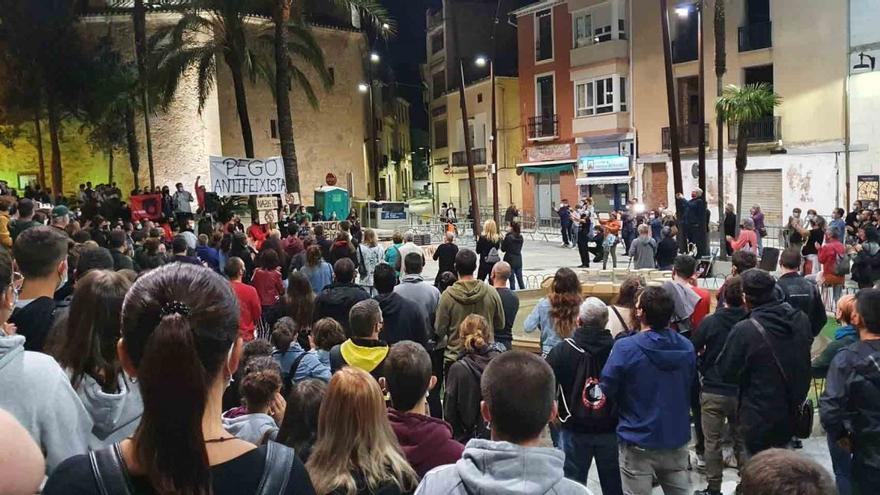 Several hundred people gathered on Tuesday night in the Plaça de l’Ajuntament de Pego to express their rejection of the events that occurred last Sunday, when an ultra-Nazi ideology group filled the municipality with slogans and stickers praising the figure of Hitler before the football match between Pego CF and CF Gandia. Some events that caused more than a hundred young people from Pego to they will show their discomfort during the match by surrounding the Cervantes football field. This led to the ultras followers of CF Gandia having to be removed from there by riot police from the Civil Guard.

“No neo-Nazi or fascist is welcome at Pego.” It is one of the phrases that in the massive gathering contained the text read by a young anti-fascist. The many attendees chanted slogans such as “Pego will be the grave of fascism.” And the manifesto not only condemned the actions of the ultras, but also lamented the “equidistance” shown in relation to the events by the Pegolino consistory and the local football club.

The manifesto regretted that the ultras had walked with impunity through the streets of the town “while hitting fascist stickers of the type Hitler fans, they shouted Nazi slogans like Sieg Heils and they made the fascist salute with their arms raised. “And that while” they walked the streets looking for young people from the town who do not share their ideology, they threatened the neighborhood and endangered coexistence. ”

Faced with this, the young woman continued, “the youth of the people”, with her response by going to protest in front of the football field, “showed that no neo-Nazi or fascist is welcome in Pego. For this reason, the organizers of the concentration have denounced “the equidistance with which the Pego City Council and the football club have dealt with the events in a statement”, since, they consider, “it is intolerable that the attitude of the neo-Nazis with the youth who came to protest. In fact, said the young woman who read the manifesto, “the council should be proud of the worthy response of Pego’s youth.”

On the other hand, the organizers have thanked all the entities and organizations inside and outside the region that have expressed their support for the people of Pego after the events, and have requested the immediate release and complete acquittal of the young anti-fascist from I hit that he was arrested. “It is outrageous that the neo-Nazis they have been provoking go unpunished and that the young people of the town have to be repressed,” the manifesto said.