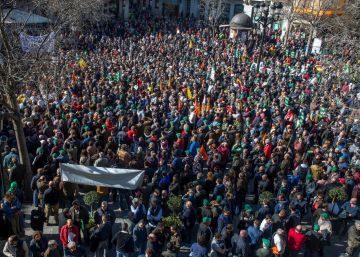 Imagine that when buying a car some brand offered it without a seat belt, without airbag and with hardly any evidence of security because they were not mandatory in the country of manufacture … And they were also much cheaper because of the low production costs … Unthinkable, right?

Well that happens with food. In Europe, farmers produce as consumers demand, with the highest standards of quality, animal welfare, traceability and respect for the environment. But then we have to compete from you to you with products from all over the world that are not even close to our quality standards, food with chemicals banned years ago in the EU or with a terrible climatic footprint … Double standards.

The farmers we do not protest the rise in the interprofessional minimum wage, we protest because, in food, the EU has an incoherent policy that suffocates us. We are forced to produce the most expensive food in the world to have to sell it competing with the prices of the cheapest food, without having trained the consumer or having a clear labeling. The result is that we have the economic sector with the lowest income in the EU.

But our despair has more reasons. Probably associate CAP with subsidies … But the CAP is much more: It is the set of policies that, together with the unbalanced law of the food chain, regulate the production, marketing and distribution of food. These regulations are designed in some cases with little dose of reality and in others to favor large capitals and distributors. Two examples. The first is the Spanish direct support design, which focuses, in the best case, on what each farmer did 20 years ago … A public policy that instead of supporting the present and future projects, supports those of the past regardless of reality. It means that with public money the free competition between producers is altered, even of the same territory, that with the same surface and producing the same, receive different aid to access the same market, being able to buy land or lease it the one that has more help. And the end result is that Only 9% of CAP recipients are under 40 and the average is in the 60s.

The second example is clearer: the kilo of oranges you buy at 1.2 euros is paid to the producer at 15 cents. Policies that favor speculation with land, food and public money.

We cannot relocate our business. Neither move them from polygon or neighborhood. We have them in the villages. Territories that drag decades of prourbanas policies that strangle us with the lack of services, communications and social, cultural, training, labor and leisure opportunities. That is why depopulation is a type of social poverty, because the opportunity gap, especially for our families, is an abyss.

To the fullest, we are now attacked saying that we are responsible for climate change. It is clear that, like any economic sector, we are partly to blame and we have to correct behaviors. But from there to which we are responsible it is not fair … it is demagogy. How many sectors act as a CO2 sink, maintain natural spaces and always practice the now called circular economy? It is easier to blame those who do not know and forget that the real cause is our modern lifestyle of eating avocados in January and drinking bottled water, having an SUV and traveling 10 times a year by plane, or asking for a mobile cable to the Another part of the world and arrive in two days. The food they travel and the agriculture they deforest is a consequence of this consumerism.

We are being deliberately cornered. It is played with which we are going to resist until the end (very close in many cases), because for us agriculture is a way of life. And this is one of those things that you see its importance when it disappears.

We have a structural problem that directly affects the sector, but indirectly the entire society. It is everyone’s decision to choose between an agriculture with farmers who care for the environment and contribute social and economic wealth to the rural environment or one of large companies that only seek their own economic benefit. Because if something is clear is that, as long as we have the habit of eating every day, there will always be agriculture and livestock.

Marcos Garcés He is a farmer and rancher in Bañón (Teruel) and coordinator of Agrarian Youth of Coag.

Portugal, the first EU country to send its reform plan to Brussels