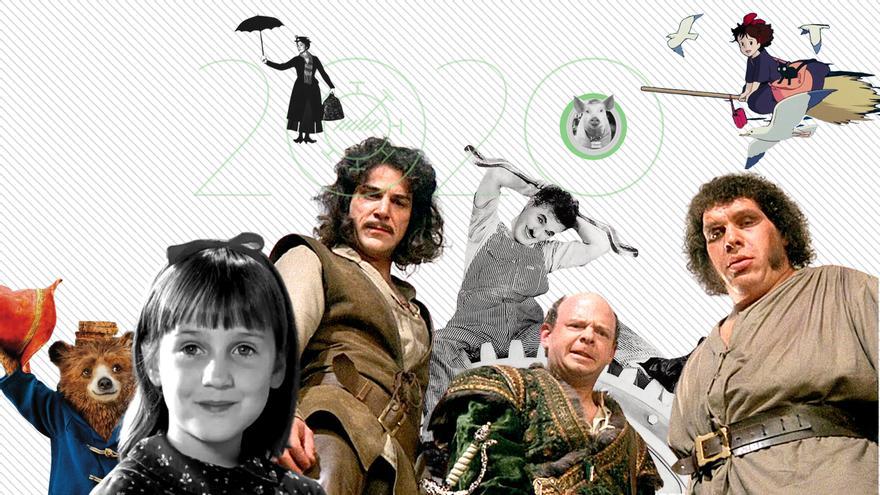 This list began with the idea of ​​recovering classic film titles -like the first one that occupies it-, or obvious objects of pop nostalgia -as so many others on the list-, that would combat our deficit of happy moments in pandemic times and in turn contribute to the smallest progressive and feminist values.

We soon realized that the matter was really complicated for obvious reasons: spinning fine and discarding titles that made us happy in our childhood Christmases, but that seen now could have controversial readings in terms of machismo, classism, transphobia, racism or even speciesism, was leaving us less and less options. Reading yesterday’s cinema with today’s values ​​is as necessary as it is inevitably disheartening.

So we chose to select a few films that we would like to see with the little ones and little ones that surround us this Christmas, without more. With the intention of replicating those December mornings in which we sat in front of the television equipped with blankets, nougat, polvorones or whatever it was that completed the Christmas ritual of each one.

What movie of your childhood did you repeat a thousand times and would it make you happy to share with your children or those of your friends or with your nieces this Christmas? Contribute your ideas and titles in the comments!

Many would be surprised at the fascination that silent films produce in the little ones, even if some are almost a century old. Time does not seem to pass by according to which works due to their dynamism and the number of finds they contain. Classics that are not obsolete.

This is the case of this film by that actor turned clown who had spent part of his childhood in an orphanage for poor children, and whose sensitivity would connect forever with viewers of any age. Chaplin came to America in 1910 to change film history forever. “It revolutionized comic cinema as profoundly as Griffith had done the dramatic, humanizing it and providing it with an emotional and narrative subtlety never seen before”, in the words of historian Mark Cousins.

Modern times can be seen on Amazon Prime Video and is open at Archive.org.

It took Disney twenty years to adapt PL Travers’ story about the unique governess who came with the east wind. But the efforts were worth it: Mary Poppins it became the film that established the philosophy of the studio. It was a true phenomenon that cost 6 million dollars and raised more than 30, causing a sensation among critics and the public, sweeping the Oscars with five statuettes – although that edition the ultimate glory was for another musical: My fair lady-.

And that it had characters such as an anarchist chimney sweep or a woman who rejected the role that was reserved for her at home to be a suffragette, demonstrate and throw rotten eggs at the prime minister. As Modern times, Mary Poppins it would deserve books and whole books but we are going to recommend two readings: Mary Poppins and the East Wind, by Manuel Ligero in La Marea, and the essay The other Disney, by Alberto Corona, containing a detailed analysis of this wonderful film. To read while humming: “With a little sugar, that pill they give you …”

Mary Poppins it can be seen, of course, on Disney +.

On December 18, 1987, we met for the first time that boy, played by Fred Savage, who was forced to spend the Christmas holidays in bed, haunted by a bad cold. Also to his grandfather, who came to keep him company with a gift under his arm: a book. A fairy tale called The engaged princess.

No, this Rob Reiner film doesn’t pass the Bechdel Test by far and yes, has more than one conflicting reading in multiple ways. With everything, The engaged princess it is also a film that does not age more than three decades after its premiere and that constantly refers to universal values ​​that are easily grasped by any generation. Affection and respect, in fact, are transmitted to us here as something that does not understand classes, races or genders. From the farmers Buttercup and Westley to that of a grandfather for his grandson, even the one between Fezzik – played by André the giant – and his inseparable friend who kept repeating his name to the sound of “My name is Íñigo Montoya , you killed my father, prepare to die. ”

The engaged princess is available on HBO, Filmin, and RakutenTV.

We could have put on this list My neighbor totoro, Ponyo on the cliff or, deep down, any ghibli movie. But if we have opted for Nicky, the witch’s apprentice It is because of the incredible maturity and respect with which he approaches the universe of a 13-year-old girl who is looking for her place in the world. For its fantastic conjugation of the adult and child universes, and for being a deeply emancipatory story about the value of being oneself.

It tells the story of a young girl who when she turns 13, like all witches, must leave her home for a year to learn to fend for herself. Then she starts working as a delivery girl flying with her broom. Until suddenly you lose the ability to do so. “It was fun to fly until I started doing it for a living,” the young woman will say. Amen to be deeply inspiring, Nicky it is narrated with exquisite taste, particularly slow tempo, and possesses the humanistic virtues of Miyazaki’s cinema.

Nicky, the witch’s apprentice is available on Netflix.

An old farmer wins a pig in a contest, but instead of serving him for dinner at Christmas, he teaches him the trade of sheepdog. A very simplistic fable and, in turn, as effective and imperishable as only this type of story can be.

This film by Chris Noonan has more than one subversive message about the ability to break stereotypes and iron doctrines of a farm in which each animal must play a very specific role, punishing those who go outside the norm. And although her speech is not an Orwellian either Rebelion on the farm, the film has an absolutely unmatched capacity to infect candor, as well as being one of the best films in the history of the noble subgenre of talking animals.

Babe, the brave little pig it is available on Movistar + and RakutenTV.

Matilda Wormwood is an intelligent girl who tries to assert herself in an authoritarian school and in a family that ignores her, among other things because she is a woman. And he will achieve it being who he is, with the help of some curious telekinetic powers.

With the same ease with which any text by Roald Dahl captures the attention of infants, it also generates debate among adults. Matilda is no exception. It must be accepted that the characterization of characters like Mrs. Trunchbull — masculinization, rudeness, ugliness — and Miss Honey — feminization, naivety and beauty — is so polarized that it generates obvious friction. But on the bottom Matilda tells the story of a girl who believes in herself and does not need any hero, except a male one, to combat the oppressions she receives at home and at school, who challenges the patriarchal model of authority of her family, who does not seek romantic love and that, in addition, finds its place in the world by relying on a single mother and forming a family in which sisterhood and empathy are the norm.

Matilda is available on Netflix.

In a small rural town in deep North America, in the middle of the Cold War, a strange object falls from the sky. A restless young man discovers that it is a giant robot that feeds on metal, and builds a peculiar friendship with him. Only that the alien nature of the robot awakens the terror of the locals, and sets off the alarms of the military.

Without much scratching, you could say that El Hierro Giant it is nothing more than an antiwar fable, and that would have its merit. But if we dwell on it, we discover that it is also a film about a single mother who deals with the double burden of work outside and inside the home, an artist who hides being one, a misfit boy who is not afraid to face adults if what They are moved by unreason and prejudice and by a robot that decides to fight against its programming and escape what is expected of it through non-violence.

El Hierro Giant can be seen on Amazon Prime Video.

Essentially it could be El Hierro Giant Disney version: also about an alien who comes to earth and befriends a human. Only this time what falls from the sky is not a robot but a furry, blue and adorable creature that meets a peculiar Hawaiian girl.

It had to be on this list for two reasons: because Western family audiovisual entertainment is marked by the Disney pattern – whether we like it or not – and because within those codes Lilo & Stitch It is probably the factory’s transgressive movie so far this century. To this day, it continues to surprise for multiple reasons: starting with its assumed feminism and ending with its militant diversity, passing through its representation of non-heteronormative or sexualized bodies, its unprecedented empathy or its respectful approach to childhood.

If we have an afternoon ahead of us but our children are not yet old enough to do a marathon of three hundred hours of travel through Middle Earth or seven years of the life of a young wizard with problems, a great option could be Paddington. What’s more, it is recommended to watch them without interruption and with tea and prepared jam sandwiches.

This is the only way to discover the infinite virtues of this adorable bear cub who arrives in pre-Brexit London as an illegal immigrant, to show how much he can contribute to a British community that has forgotten the values ​​of education, integration and diversity. A delight whose second installment is, if possible, more imaginative and genuinely funny than the previous one.

Paddington 1 is available on Netflix.