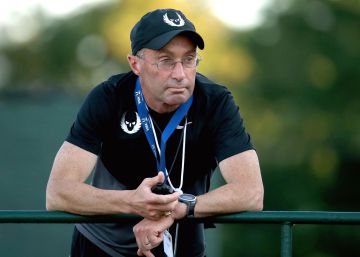 Nike announced Friday its plans to end the Oregon Project after the suspension, last week, of the American athletic trainer of Cuban origin Alberto Salazar for breaking the anti-doping rules. "This situation, added to other false accusations, bothers many
athletes and prevents them from concentrating on their training and competitions, "said the president of the American sports group, Mark Parker, in an internal message to his collaborators." Therefore, I have made the decision to end the Oregon Project. " .

This training center was created in 2001 on the Nike campus in Oregon (northwestern United States) to break the hegemony of Ethiopians and Kenyans in cross-country and mid-fund races, recruiting young talents and multiplying innovations in preparation .
The Nike boss, however, continued to support Salazar, who was coach of Mo Farah – four times Olympic champion and six times world champion (in 5,000 and 10,000 meters) -, considering that "a four-year suspension for someone who acted in good faith, is wrong. "

The United States Anti-Doping Agency (USADA) "established that there was no orchestrated doping, or findings that drugs intended to improve performance have been used in Oregon Project athletes and highlighted Alberto's desire to follow all the rules." At the same time, however, he admitted that "Alberto cannot train while awaiting the outcome of his appeal."

A week ago Salazar, 61, was suspended four years for "incitement" to doping by the USADA. The coach was the backbone of the Oregon Project, an elite group funded by Nike. The project website is no longer accessible and its social networks were closed.

Oregon Project athletes won three gold medals at the Doha Athletics World Championship, which ended last Sunday. The Dutchwoman Sifan Hassan won the 1,500 meters and the 10,000 meters female, while the American Donavan Brazier won the gold of the 800 meters men. There is no sign that either of the two athletes has been involved in doping.

An angry Hassan said she is happy to be tested "every day" to prove she is a clean athlete. "I believe in clean sport, I am always clean, I will always be clean. I believe in the Oregon Project. I have seen Alberto. He has worked very hard and that is what I know," she said, excited, after making the sixth best time of the story and win the 1,500 meters.

British athlete Farah has also faced new questions about his relationship with Salazar. Farah, who has never tested positive for doping tests, waited more than two years after the first accusations against Salazar were made to finally separate from the coach in October 2017. Farah will run the Chicago marathon on Sunday. Galen Rupp, another athlete from the Oregon Project, will also participate.

Several athletes, including American fondista Kara Goucher, who was a Nike athlete between 2004 and 2011, called for the Oregon Project to disappear due to Salazar's practices. "If I were Nike, I would bring other coaches and close the Oregon Project page, because it is clear that their principles do not correspond to those of a clean sport, it is necessary to start from scratch," said Goucher, who testified against Salazar.

Injections of amino acids (to burn fat), experiments with testosterone or falsified medical documents were some of the conclusions of the six-year investigation of the USADA, which revealed a series of important excesses of Salazar, a former athlete turned into the most famous athletic trainer in the world.

In its report, the USADA also states that Parker appears copied in emails about the progress of the Oregon Project investigations, which had been created in 2001. The Salazar scandal had a moderate impact on the price of Nike shares, and then Friday’s announcement rose from 1.65% to $ 94.53 in New York, in a market that grew 1.54%.

LaLiga Santander 2019 – 20: Athletic – Celta: schedule and where to watch the Liga match on TV today

Badminton. Carolina Marín stays in Indonesia one step away from the dream comeback