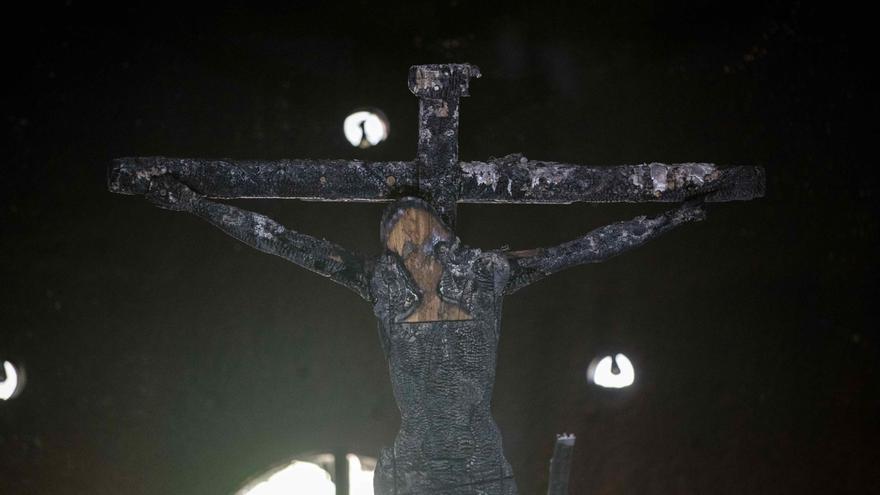 Managua, Apr 2 (EFE) .- The Catholics of Nicaragua celebrated Good Friday with a virtual Stations of the Cross in the Cathedral of Managua in the presence of the venerated image of the Blood of Christ, burned eight months ago in its chapel and that the authorities Church officials maintain that it was a “terrorist act.”

“Every Good Friday we have accompanied from the Teresian School to our Cathedral Church (in Managua) the precious, venerated and consecrated image of the Blood of Christ. Today, this year 2021, for very special reasons we cannot do that traditional route,” explained the Nicaraguan Cardinal Leopoldo Brenes, at the beginning of the virtual mass.

“Our image, burned, always accompanies us, and there, nailed that image on the cross that could not be destroyed” continues to make “that promise of the Lord come true: when I am lifted up, I will attract all eyes to myself”, said Brenes , also Archbishop of the Diocese of Managua, Masaya and Carazo.

“We continue to look at Jesus in this beautiful image of the Blood of Christ,” said the religious.

The Catholic hierarch urged the devotees of the Blood of Christ to “live this holy way of the cross in a virtual way.”

“That is why I invite you with soul, life and heart to dispose ourselves to spiritually live this holy exercise, that we feel that loving presence of the Lord,” he advocated.

THE BLOOD OF CHRIST AND COVID-19

The image of the Sangre de Cristo, one of the most venerated in Nicaragua, and burned on July 31, 2020 in its chapel in the Cathedral of Managua in an involuntary fire, according to the authorities, in a terrorist act, according to the Catholic Church, has 383 years of having arrived in Managua.

According to the Archdiocese of Managua and witnesses, an unknown person, in a planned action, launched an artifact that caused the accident.

The National Police, led by a brother-in-law of President Daniel Ortega, concluded that the fire was caused by a candle, as the vice president and first lady, Rosario Murillo, had anticipated, minutes after the event.

The burning of the image, with 383 years of history and representing Jesus crucified, was preceded by a wave of desecration against Catholic temples in Nicaragua, which aroused suspicions in the hierarchs and thus opened another chapter of disagreements with the ruler Sandinista National Liberation Front (FSLN).

Brought from Guatemala on July 4, 1638, the image of the Blood of Christ, made of polychrome wood and which was initially exalted as “The Lord of Miracles”, was venerated by Saint John Paul II in 1996, when it was He knelt and prayed at his feet, during his second visit to this Central American country, with a Catholic majority.

During Mass on Good Friday, Cardinal Brenes called on Nicaraguans not to be spectators of the passion of Christ, but to meditate on the temptations of his personal “Stations of the Cross” in this time of pain, illness and pandemic due to the coronavirus that attacks us “.

“We want to live your way of the cross and deeply touch our hearts,” he urged.

In other municipalities in Nicaragua, Catholicism celebrated masses without crowded temples due to the covid-19 pandemic, and in some places there were processions that relived the last hours of Jesus Christ’s life. EFE